After passage by state legislators, governor signs variety of laws

Gov. Andrew Cuomo has been busy signing legislation passed by the state Senate and Assembly before both went on summer hiatus in late June.

On July 8, Cuomo signed a bill allowing the release of state tax returns of “certain federal, state and local elected officials, federal executive staff, federal officers confirmed by the U.S. Senate, or the return of companies they have control over” to the U.S. House Ways & Means Committee, the U.S. Senate Finance Committee or the Joint Committee on Taxation.

President Donald Trump, a New York resident who has declined to release his returns, which members of the U.S. House say they need to see for investigative purposes, is the unnamed target of the legislation.

“Tax secrecy is paramount — the exception being for bonafide investigative and law-enforcement purposes,” Cuomo said in a statement. “This bill gives Congress the ability to fulfill its Constitutional responsibilities, strengthen our democratic system and ensure that no one is above the law.”

On July 23, the president sued in federal court to nullify the law, and on Aug. 1 a judge blocked the state from turning over any returns until it had a chance to argue whether Washington, D.C., was the proper place for the lawsuit to have been filed. The Treasury Department has refused requests by Congress to release his federal returns, saying lawmakers don’t need to see them for any “legitimate legislative purpose.”

This law, which takes effect on Aug. 28, reduces the penalty for possession of less than two ounces of marijuana from a misdemeanor to a violation punishable by a fine. It also creates a process for some people who have been convicted of marijuana misdemeanors to have their arrests expunged.

The possession of a small amount of weed (23 grams or less) for personal use has been a violation since 1977 unless an officer determined that the marijuana was “in public view” or “burning.” Lawmakers argue the bill will correct a racial injustice, noting that in 2015 in New York City, nearly 90 percent of those arrested and charged with misdemeanors were black or Latino while federal data indicates young white men are far more likely to possess and use weed.

The law means that anyone caught with a small amount of marijuana will not be arrested but instead face a fine of $50 or, if the person is smoking in a public place in public view or the blunt is lit, a fine of up to $200.

Former Vice President Al Gore joined Cuomo on July 18 as the governor signed the Climate Leadership and Community Protection Act, which includes the ambitious goal of 70 percent of the state’s electricity coming from renewables by 2030 and an 85 percent reduction in greenhouse-gas emissions by 2050.

Among other provisions, the law establishes a 22-person climate-action council to make recommendations and gives state agencies authority to adopt greenhouse-gas regulations. It also requires the Department of Environmental Conservation to consider climate change when it issues rulings. 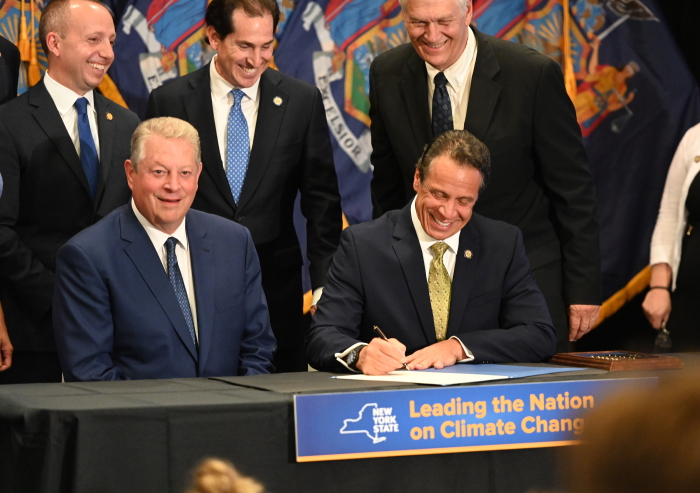 “Signing this law is a historic and a vital step, but we must execute also, especially when the goals we set may outlast the tenure of some of the people setting the goals,” Cuomo said at the signing. “That is not to say that I don’t intend to be governor in 2050. I do. But some of the other state officials may not be around. So government’s challenge is to also implement the plan… And that is the art form: to develop a sustainable, achievable environmental agenda that does not disrupt our economy.”

Cuomo on July 17 signed a law that gives farmworkers overtime pay, one day off per week and benefits such as disability, worker’s compensation, paid family leave and unemployment insurance.

The law, which takes effect on Jan. 1, also provides farm laborers with collective bargaining rights; provides for a 60-hour work week; requires that sanitary codes apply to all worker housing; removes a payroll threshold for requiring employers to obtain workers’ comp coverage; and requires that workplace injuries be reported to employers.

On July 12, Cuomo signed a law making it illegal to discriminate based on “traits historically associated with race, including but not limited to hair texture and protective hairstyles.”

The bill’s sponsor in the Senate, Jamaal Bailey (D-Bronx), noted that the New York City Commission on Human Rights in February released guidelines on “race discrimination on the basis of hair” that outlined the rights of people to maintain their “natural hair, treated or untreated hairstyles such as loos, cornrows, twists, braids, Bantu knots, fades, Afros, and/or the right to keep hair in an uncut or untrimmed state.”

Bailey cited national incidents reported in the media such as a high school wrestler in New Jersey who was forced to cut his hair or forfeit a match; a 6-year-old boy in Florida turned away from a private Christian academy because his hair reached below his ears; and a New Orleans girl sent home from a Catholic school for wearing braids.

On July 16, Cuomo signed a bill raising the minimum age to buy cigarettes and e-cigarettes from 18 to 21. It takes effect on Nov. 13.

On July 10, Cuomo enacted a law making it illegal for employers to ask job applicants for their salary histories. The law, designed to prevent “wage discrimination,” goes into effect on Jan. 6.

On July 22, New York became the first state to ban the declawing of cats. Known as onychectomy, the procedure involves removing most or all of the last bone of each of the toes of the front feet, severing tendons, nerves and ligaments. Supporters noted that claws are vital to cats for climbing, maintaining balance and to defend themselves.

On July 31, Cuomo enacted a law that allows firefighters and other emergency medical responders to remove pets found in unattended vehicles if they believe the animals are in danger due to extreme heat or cold. Police officers are already authorized to remove animals in those situations.

On July 25, Cuomo signed legislation that extends state human rights laws to cover public schools, allowing the Division of Human Rights to investigate bullying, harassment or other forms of discrimination. The bill was introduced in response to a 2012 court decision that said that “educational institutions” included in the state Human Rights Law did not include public schools.

Cuomo on July 25 signed a law billed by supporters as an update to existing “breach notification” regulations. It expands the definition of digital data that businesses should protect to include biometrics and email addresses/user names with passwords and security questions; updates the notification requirements to include anyone living in New York state, not just those who “conduct business” here; and requires businesses to have “reasonable data security.” The law takes effect on March 21, 2020.

Under the law, posting such photos is a misdemeanor punishable by up to a year in jail. Victims also can sue for civil damages and ask a court to compel websites to remove the images.

Cuomo on July 30 signed legislation to allow local and state candidates or those involved in “the duties of public office or party position” to use campaign funds for child-care expenses. The governor said the law was intended to allow “more parents to run for office.” It takes effect on Sept. 28.

On Aug. 1, Cuomo signed legislation allowing victims of sexual offenses, stalking and human trafficking to participate in a program in which the Department of State provides a substitute mailing address to keep their location hidden. The bill will take effect on Oct. 30. Before the change, the program was available only to victims of domestic abuse.

This law, enacted on July 16, requires gun owners who transport a pistol or revolver to shooting ranges or competitions to unload the weapon and store it in a locked container — excluding the glove box — during transport, with ammo carried separately. (There is one exception: New York City law bars anyone from bringing a handgun into the city without authorization from the police.) The state argues that the law makes moot a lawsuit by the New York State Rifle & Pistol Association over a New York City law that bans its residents from transporting handguns to homes, shooting ranges or competitions outside city limits. In January, the U.S. Supreme Court agreed to hear an appeal after a lower court ruled it did not violate the Second Amendment.

Cuomo on July 29 signed a law that bans the sale or possession of bump stocks, which accelerate the rate at which semi-automatic weapons can be fired. (State law had banned attaching a bump stock to a weapon, but not owning or selling one.) On March 26, a federal rule went into effect classifying firearms with bump stocks as illegal machine guns. Before that, bump stocks had been considered gun “accessories” not subject to regulation. The Justice Department says only one company was still making bump stocks by late 2018 but that an estimated 280,000 to 520,000 were sold in the U.S. from 2010 to 2017.

When a gun dealer conducts a check of a potential customer through the National Instant Criminal Background Check System, he or she is told the sale is approved, denied or “delayed,” which requires the buyer to wait three days while the FBI begins an investigation. Cuomo on July 29 signed a law that extends that waiting period in New York state to 30 days.

Cuomo signed legislation on July 30 criminalizing the manufacture, sale, transport and possession of firearms that are undetectable by a metal detector, such as those made with 3D printers. 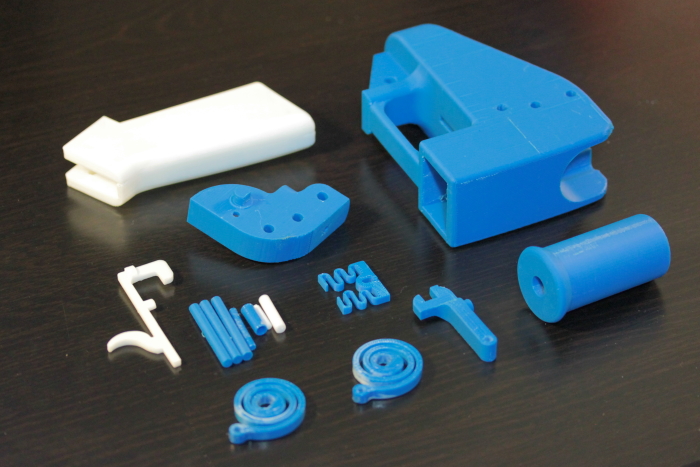 The printed parts of a single-shot Liberator handgun (Flickr)

Cuomo on July 30 enacted legislation that bans schools from authorizing anyone but a school resource officer, law enforcement officer or security guard to carry a firearm on the grounds of any school, including colleges and universities, or on a school bus. The bill was introduced in response to suggestions after the killings at Stoneman Douglas High School in Parkland, Florida, in 2018 that teachers be allowed to carry concealed weapons. “The answer to the gun violence epidemic plaguing this country has never been and never will be more guns,” Cuomo said in a statement.