I had my first panic attack a few weeks ago and can tell you two things. First, I don’t recommend them. Second, if you insist on having one, hanging from a boulder at 5,000 feet is a bad place for it.

I had gone to Maine to climb Katahdin, the tallest mountain in the state. For Maine’s indigenous peoples, the mountain was the home of the storm god Pamola, who can be unforgiving to those who climb its peaks without leaving an offering. For Appalachian Trail hikers it’s the end of the 2,189-mile journey from Georgia. And for Henry David Thoreau, who was one of the first white people to climb the mountain in 1846 although he famously just missed the summit, it was a place to experience nature in all its terrifying sublimity. 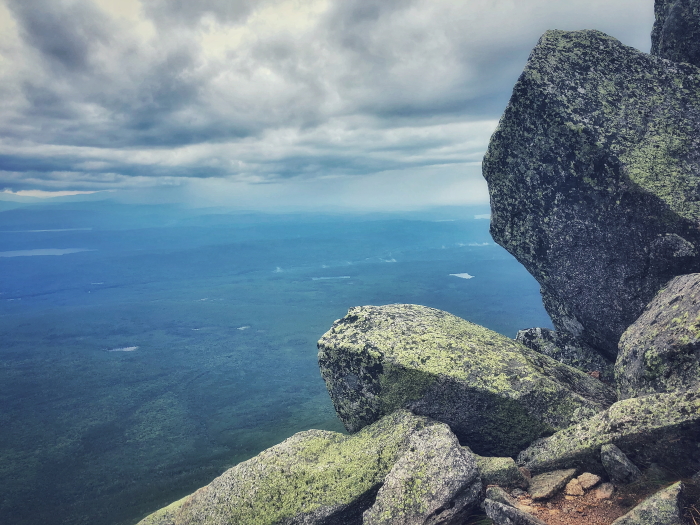 “The solid earth! The actual world! The common sense!” (Photo by B. Cronin)

I chose the Abol trail. Although Thoreau described it as being “made out of Chaos and Old Night,” with a battleground of boulders that looked like “the vast materials of a planet dropped from an unseen quarry,” I wasn’t worried. Much as I love the guy, Thoreau was prone to exaggeration.

Unfortunately, in this case, the old Concord rascal nailed it. Once you leave the treeline, the route becomes a vertical slog, forcing you to pull yourself over outhouse-sized boulders for hours as you ascend into the “cloud factory” (Thoreau again). Like the writer, I found myself inside a rain cloud, blasted with whipping winds, pounding water and dense tendrils of fog that obscured anything more than 10 feet away.

Once I reached the tableland a mile from the summit, where the Abol intersects with the final mile of the Appalachian Trail, there was no 360-degree view to greet me. Instead, there was a mossy and tempestuous moonscape to stumble through, waiting for the next cairn to arise out of the mist, showing me which way to go. The cairns weren’t there in Thoreau’s time, which is one reason he likely didn’t find the summit.

I did not leave an offering for Pamola at the peak, because while it’s a romantic idea, I wasn’t sure how it would square with Leave No Trace. That may explain what happened next. As I slowly began my descent, the clouds lifted as quickly as a stage curtain. That’s when I realized I was hanging off a boulder with little between me and the entire state of Maine but about a mile of air.

I grew dizzy. I began to panic.

Ultrarunning saved me. I’d been taking a break from training, but lessons I’ve learned on the course helped me regain my composure:

Calories are your friend

During a long race, many times sudden thoughts of quitting can be countered by sitting down, having something to eat, and waiting a few minutes. More often than not, you can keep going. After squeezing between two boulders to shield myself from the wind and wolfing down a protein bar, I felt much more in control.

Always look on the bright side

Before leaving an aid station during an ultra, it’s wise to thank every volunteer because, besides being polite, it puts you in a state of gratitude and grace. As my clothes dried on the mountain, I thought about how fortunate I was that the weather was changing for the better and that I wasn’t dealing with physical setbacks, such as a broken leg. Heck, I wasn’t even sore.

When is 30 miles longer than 50? When you’re 20 miles into a 50-mile race. When the mass of runners surges forward at the starting line, everyone is filled with optimism. But around mile 20 you realize you’re not even halfway. The trick is to break the distance into bites. Concentrate on making it to the next aid station, checkpoint or tree. Then, pick a new goal. So, on Khatadin, instead of thinking of the hours I had to go, I scanned my descent until I found a trail marker. I lowered myself to it, then found another. Working that way, I was soon below the treeline and walking again.

Thoreau lost his mind once he returned to the foothills, writing one of the weirdest passages of his life: “The solid earth! The actual world! The common sense! Contact! Contact! Who are we? Where are we?” I can now say it was a rational and healthy reaction to completing any feat of endurance. Whether it’s a long race or a mountain climb, the endorphins are gonna get you. Enjoy it.