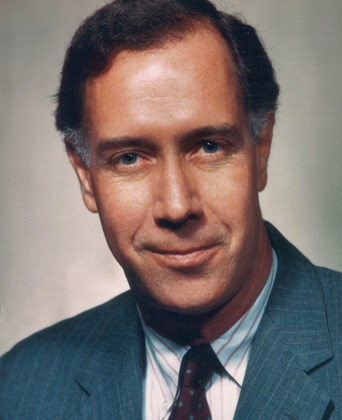 Born March 3, 1934, in Kansas, he was the son of John and Stella (Gosney) McManus. He grew up in St. Louis after his father, a certified public accountant, was transferred there.

In 1959 McManus married Patricia Ann Paulson; the couple divorced in 1966. He next married Jill Coxhead; they also divorced. In 1973 he married Deborah Murphy, whom he met at Time, where she was a researcher. The couple purchased a home in Garrison in the early 1990s.

McManus graduated in 1956 from Davidson College with a degree in philosophy and religion, planning to become a Presbyterian minister, and from Princeton University in 1958 with a master’s in public administration. That same year, he was named a Rhodes scholar and studied in England at Oxford.

He began working for Time Inc. in 1957 as a summer intern with Sports Illustrated and joined Time in 1959 as a writer. He later served as the magazine’s first Common Market bureau chief in Paris and “had a love for anything French” for the remainder of his life, Deborah McManus said.

He returned to New York in 1964 as a writer and, during his time as world editor, directed coverage of the Vietnam War. Later, as national editor, he oversaw the magazine’s reporting on the Watergate scandal.

In 1985, he became managing editor and in 1987 succeeded Henry Grunwald to become the fourth editor-in-chief of Time Inc., overseeing its 24 magazines. (In 1990 the company merged with Warner Communications to become Time Warner.)

In a profile of Time Inc. published in 1989, The New York Times described McManus as “a talented journalist with a gift for dealing with people and for corporate clubbiness” who had an “easy style” with colleagues. He retired from Time Warner in 1994.

In 2015, McManus joined the board of directors of the nonprofit newspaper now known as The Highlands Current. He stepped down in 2017 but remained as an adviser and supporter until his death.

“Jason brought to our community enterprise the insight, energy and high standards that made him for decades an outstanding figure in American journalism, as a reporter, editor and corporate executive,” the board said in a statement.

McManus was a lifelong fan of the St. Louis Cardinals and would listen to games with his mother on the radio while they washed the dishes together, said Deborah McManus. She recalled that he also would get up in the middle of the night when living in France to watch games. At Time Inc., when he couldn’t find a place to play baseball, he formed a league with colleagues. “If something wasn’t there, he made it,” said his daughter, Mage.

Besides his wife, McManus is survived by a son John McManus (by his first wife) and two daughters, Sophie McManus (Jay Mones) and Mage McManus (Rick Schock), with Deborah. He also is survived by a granddaughter, Vivien Mones; a sister, Linda O’Callahan (Jay); and his former wives, Patricia Gold and Jill McManus.

The family will hold a private service. Memorial donations may be made to ProPublica (propublica.org), a nonprofit national newsroom for investigative journalism.