Earlier this month, Beacon said goodbye to Open Space Gallery, the art space created by Dan Weise and Kalene Rivers on the east end of Main Street in 2007.

As with everything Open Space did, it was hard to categorize the closing: All at once, it was a gallery show, an art sale, a party, a memorial, a reunion, a retrospective of event photos and a pop-up cafe run by the couple’s 5-year-old daughter. 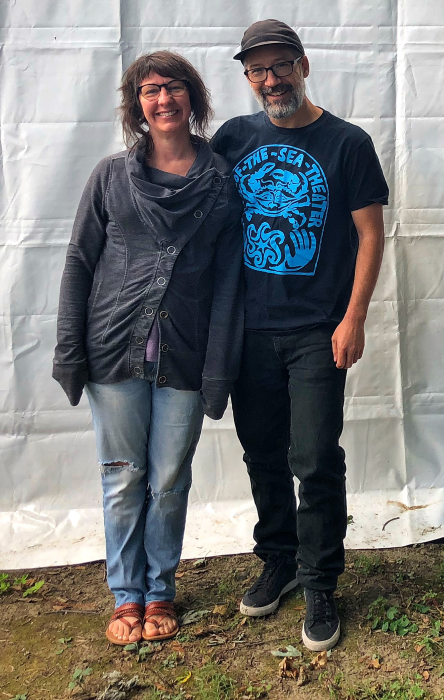 Kalene Rivers and Dan Weise (Photo by B. Cronin)

“There were some people watching the slideshow seeing pictures of themselves at our first shows with their kids when they were 5, and now they’re 17,” said Weise. “Twelve years is a long time, especially for children.”

Though Open Space is closed, Weise said the couple will continue to live and work in Beacon.

When the couple came to Beacon from New York City by way of Mahopac in 2007, Main Street’s east end was quiet. They started hosting shows of street art when it was still under the radar and you could buy a Banksy from Banksy for $400, as they did.

“You could go to the website and click ‘buy’ and they’d ship it to you in a tube,” recalled Weise. Paintings by the artist have recently sold for more than $1 million.

The couple hadn’t planned to show Beacon artists because, at the time, they didn’t know any. “But we met them very quickly!” said Rivers. “We opened the gallery and they all came in.”

“Kalene is way more organized than I am,” Weise said, “which is why some of the shows had 100 artists. People will do stuff for Kalene because she’s amazing. I have to convince people.”

Soon the couple were putting on late-night dance parties. “The cops would always come by, not because anyone called them but because they were bored” while working the third shift, said Weise.

The dance parties helped fund Electric Windows, in which the cavernous windows at a vacant warehouse across the street on 1 East Main — now filled with $1 million condos — became an outdoor gallery. With the street closed to traffic, artists painted murals in giant canvases in the middle of the road, and the paintings hung in the windows, where they remained for years. 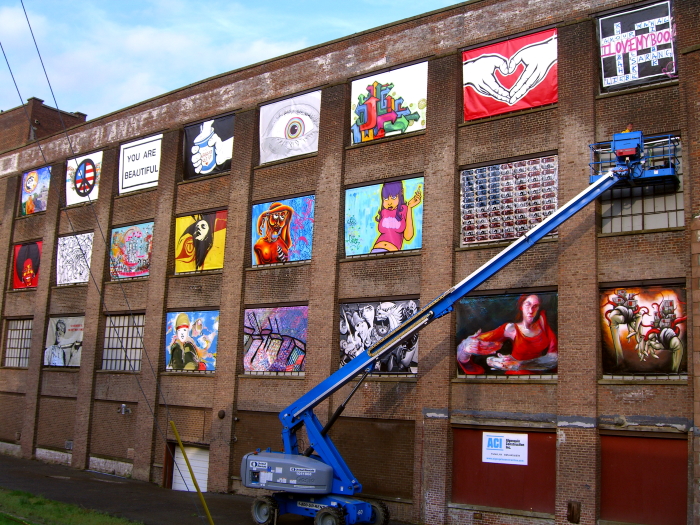 Artwork being installed during Electric Windows in 2008 (Photo provided)

There were also the totems that appeared all over Beacon, made by different artists, to celebrate the Two Row Wampum Renewal festival at the waterfront. Two of the totems stand and double as stops in the mobile-phone game Pokemon Go.

There were the Welcome to Beacon signs made with politicians and artists to greet visitors as they leave the train station. There’s the monthly Club Draw at Quinn’s and the annual Club Draw picnic. And all the while the couple provide branding and graphic design for businesses such as the Beacon Music Factory and Zero to Go and the Beacon Department of Recreation, which resulted in a specific and identifiable “look” for Beacon. 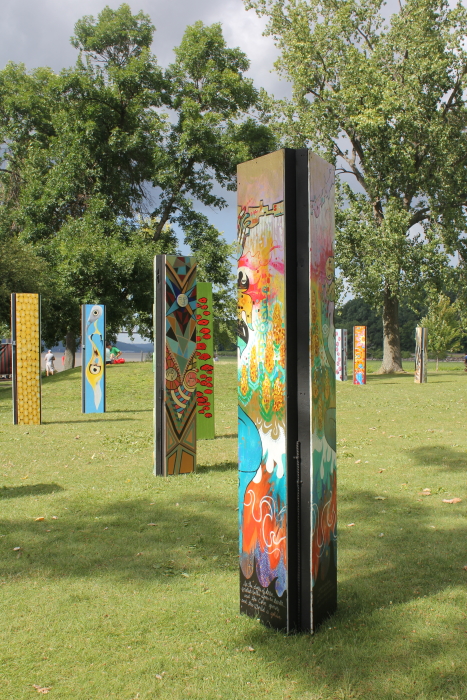 The totem festival in 2013 (Photo provided)

Then there was Electric Projected in 2011, an event that may live forever in the hearts of Beaconites, as well as on YouTube. Hundreds of people turned out one autumn night to see original animated films inspired by the Electric Windows murals projected onto the warehouse. Each film made a painting “come to life,” as balls appeared to pour out of the building, a bear crawled over the face of the building to chase a firefly ducking inside the windows, and an owl seemed to swoop down over the screaming crowd.

The event was initially rained out, but Weise and Rivers raised $20,000 in donations in a month to rent the equipment again.

Five years ago, a fire next door to Open Space took some wind out of their sails. Smoke poured into the gallery, damaging the hanging art. Many of Rivers’ pieces, which she makes from raw wood, still smell of smoke.

After the fire, the couple found themselves using the space less as a gallery and more of an office. “It’s too big a space if we’re just going to use it as a nice storage unit,” said Rivers. “Now it can be utilized for someone else who needs it.”

The couple have settled into a studio a few blocks away in the old high school. “We have big windows, north light and a hardwood floor,” said Weise. “It feels like an upgrade.”

What’s next? “We’ve got some things percolating,” said Rivers. Added Weise: “When it happens, you’ll know.”