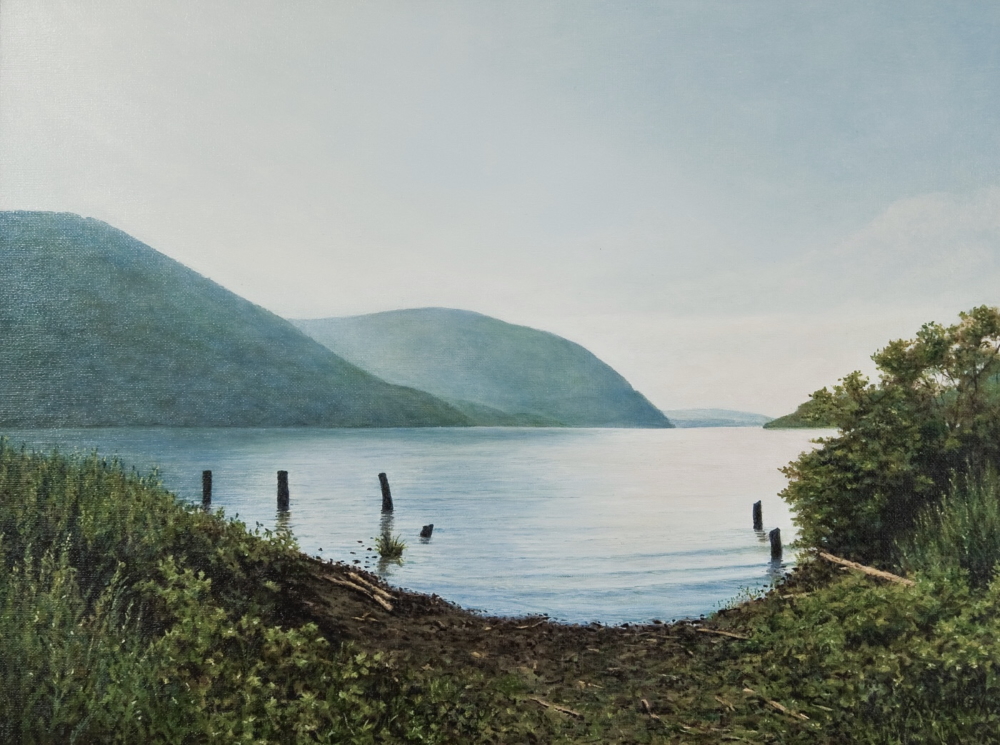 Rick Gedney’s works to be featured at The Current

Rick Gedney’s Hudson Valley landscapes can fool viewers — in the best way — into thinking they are photographs, not paintings. Typically riverscapes, his works also tend to evoke an awe that prompts a look at the actual setting. Perhaps it’s because he waits for the most perfect light, or moment.

Gedney’s paintings will be exhibited at The Current’s new quarters at 142 Main St., Cold Spring, opening next Friday (Dec 6.), with an open house from 6 to 9 p.m., and continuing into January. 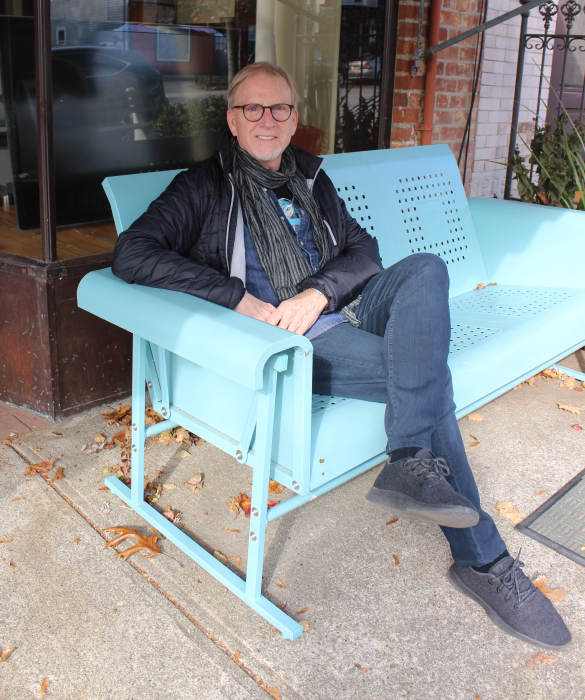 Rick Gedney outside The Current’s new office (Photo by A. Rooney)

“I’m absorbed by details; how we see things, how light hits an object,” says Gedney, who has “a particular love for where the sea, the sky and the air meet.” He grew up in Port Chester and Rye and his earliest memories are of family visits to parks and beaches, “so there’s an affinity for rivers, streams, and water.”

After discovering art in Indiana at Franklin College, Gedney planned to combine a career in painting with teaching guitar. He recalls two Franklin teachers who “made art come alive for me.”

One, Thomas Locker, a traditionalist who painted in the Hudson River School style, “insisted we needed to learn to draw, whereas” the other, Luigi Crispino, an Italian abstract expressionist, “was all about color — how reds balance against greens, darks against lights. I loved Locker’s drawing and his representational work but I also loved Crispino’s colors and his brush work,” Gedney says.

After earning a B.A. in arts and painting, Gedney moved back to the New York area, where he soon found himself mired in a bad economy, married, and unable to find teaching jobs. He turned to banking, initially as a teller because “it was kind of easy and I figured I would paint on the side.” But “kids came along and I had to make a real living, so I didn’t stick with art. I lacked confidence. I’m still self-conscious that I didn’t follow my heart,” he says. 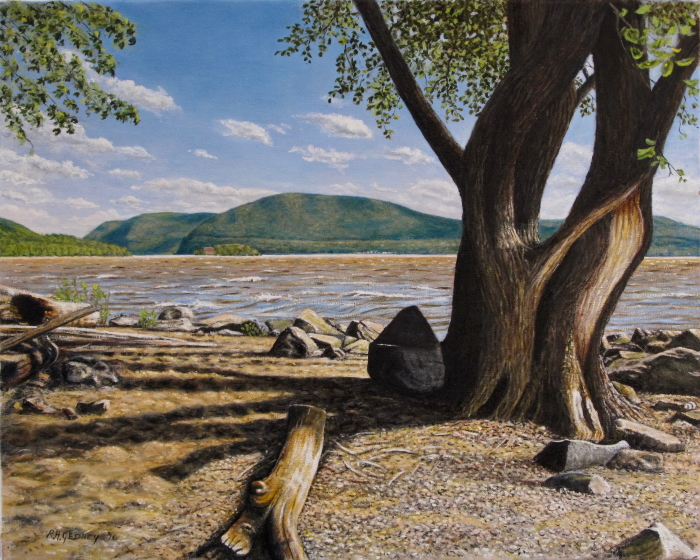 Nonetheless, even as he moved into real estate finance, Gedney never entirely stopped painting. “I set aside a little space for myself in a corner of our family room.  Since I worked with oils, which needed to dry, I was able to do a bit, then stop, deal with family life or go to work, then return to it.”

Along with painting, Gedney loved playing guitar. “Music was much like art,” he states. “I didn’t play in bands anymore, but I always kept playing, privately. 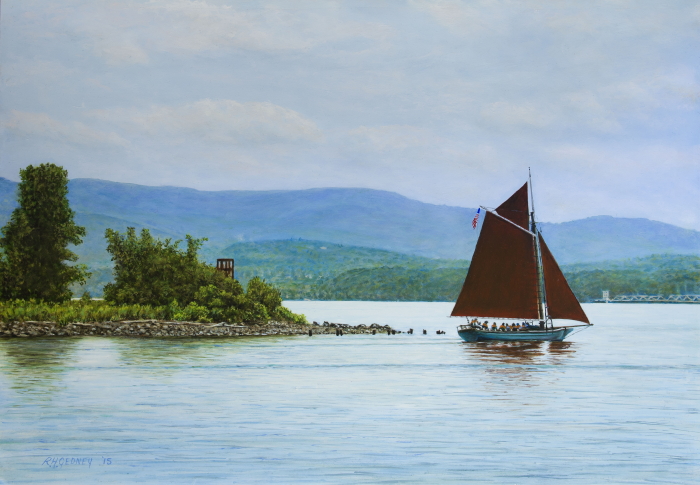 The sloop Woody Guthrie on the Hudson

Then the 2008 economic crisis brought a kind of forced retirement. “I was carrying on this dual career and I saw an opportunity to get out. I knew if I really wanted to paint, now was the time,” Gedney recalls.

Living in lower Westchester, he traveled north, seeking places where Hudson River School landscape artist Sanford Gifford had painted. In 2009, he and his second wife, Michele (The Current’s advertising director), relocated to Philipstown, lured by the area’s beauty and an abundance of friends in the arts living nearby. 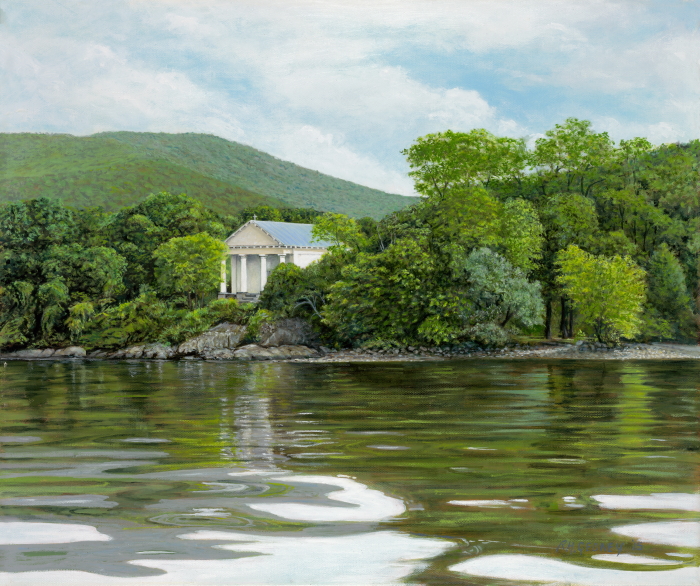 “When I was about 50 it all came together. I was so unhappy, because I had gotten so far away from who I was and what I wanted to be doing; there was no choice. Everything was pulling me away from the arts; I reached a point where I could continue on that path or finally get back on the other one. It took a few years, but once I made the decision, everything opened up.”

Gedney returned to painting and to “a conflict inside my head — a battle between the left and right brain—  the creative side, which wants to push the limits, and the left side, which loves technique and is more analytical.” He also strives to simplify. “Because I love details so much, I tend to overwork things, every blade of glass,” he explains. “I’m trying to pull back now. I’m on that line of trying to find out how to combine the abstract with the realistic.” 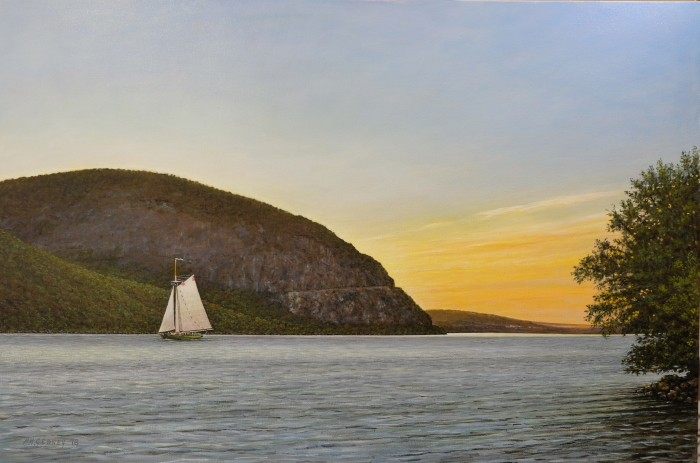 Last Sail of the Day

When he comes upon a scene to paint, Gedney says, “sometimes I do a sketch on site, but usually I just take a lot of photographs. Then I compose the painting from multiple photos.”

He often divides the canvas, “so things are balanced.” Then he considers the mood to be evoked. “It’s about seeing the beauty in that one little moment, when the wind has come down and the water ripples, and the sky is illuminated. It’s about being observant, waiting. I look for those kinds of moments. It’s not about painting a landscape for a view or a historic event, but instead a moment of peace and contemplation.” 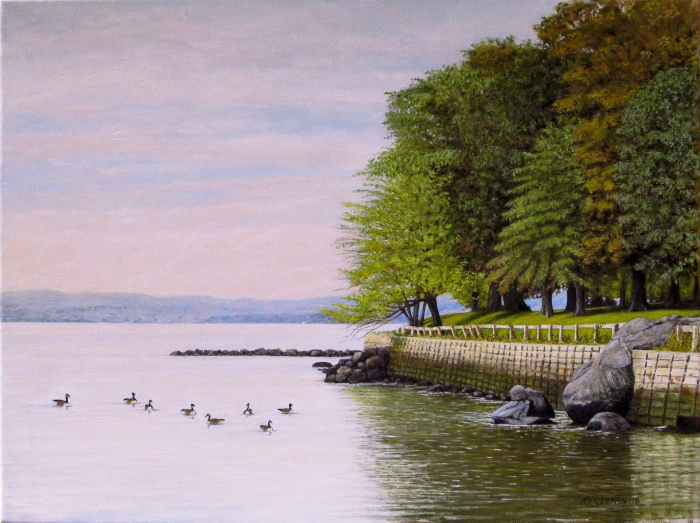 Musically, he also performs with Michele as Open Book, a singer-songwriter duo known for vocal harmonies, interwoven guitars, and stripped-to-the-core emotional content. Open Book has released three albums and appears in the Hudson Valley and beyond.

The reasons for Gedney’s painting and music are clear: “I don’t do either to make a living. I pursue it because I have to; I can’t not do it,” he says. “It’s about listening to your heart, then following your thoughts and your heart when they’re aligned.”