It’s hard to outrun a rain cloud, but after the second somersault, it was clear I didn’t have a choice.

A few weeks ago I was in Maryland, running the JFK 50 Miler, which began in 1963 and is the oldest ultramarathon in the country. The first 15 miles are mostly on the Appalachian Trail and extremely “technical,” which in trail-running lingo means “rocky.” It’s also narrow, which makes it hard to pass people, so you settle in and take it easy until the trail widens.

I fell in behind two runners, a man and a woman, who didn’t know each other but had some familiarity with the race and were swapping stories about the horrific injuries that had befallen others who had previously run the JFK 50. Then the woman started complaining about the rocks. Then she complained about last year’s weather, when 6 inches of snow fell the day before the race. And then she was flying through the air.

I’m not sure what tripped her but it sent her into a flip, with her feet pointed to the sky and her head pointed to the ground. Thankfully, she was OK. Two minutes later, she flipped again. Then the man she was running with tripped. Then I tripped.

What caused us all to start tripping? Mystical bad vibes brought about by recalling injuries? Lack of focus caused by whining about the weather? I’m not sure if the answer is metaphysical or practical, but I have seen it repeatedly in races: If you are in a bad mood, bad things happen. And that bad mood can spread. 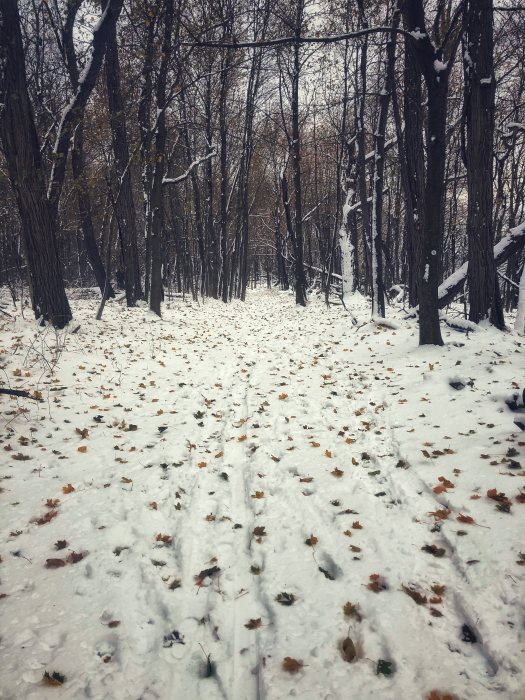 Suck it up, buttercup. (Photo by B. Cronin)

Of course, there are exceptions, especially during a long race. If you hit a rough patch, you sometimes just need a quick pity party. If another runner will empathize, you can recover. People often tell me their problems on the trail. I’d like to think it’s because I have a kind face, but it’s more likely because if you’re running slow enough that I can pass you, you’re probably having a bad day.

At other times, inexplicably, melancholy shrouds you during a run. I don’t feel anyone is responsible for that feeling, or has any control of it. But some people seem determined to wallow in it. This is one reason ultrarunners are conditioned to thank volunteers, aid station workers and first responders they encounter during the race — it’s the right thing to do but also puts you in the right mindset. Each of these people chose to be out there in the cold, the rain and the snow to help you. Realizing that you are being cared for and protected is, as the kids say, a mood.

To escape the bad vibes of the tumblers at the JFK 50, I went off trail, hoping I was at least trampling invasive species. Soon I was running with a group of three women who had come to the race together — one had run it nine times, and the others were newbies. They said they were nervous and terrified, but they said so while laughing. I asked the leader what she thought last year of the snow. “Oh, that was horrible,” she said with a smile. “We’re lucky the weather is so good today.”

We ran into each other a few times throughout the day; whenever we passed each other, we shouted encouragement. “We got this!” I said as day turned to night. “You’re killing it!” they yelled as they passed me in the final miles.

They finished the race about 10 minutes ahead and were congratulating other finishers when I arrived, in a cold rain.

As for the couple I had to run around, I didn’t see them again. Perhaps they’re still up there, complaining.