The Haldane High School’s boys’ basketball team is off to a strong start to the 2019-20 season, with the Blue Devils winning two of their first three games. 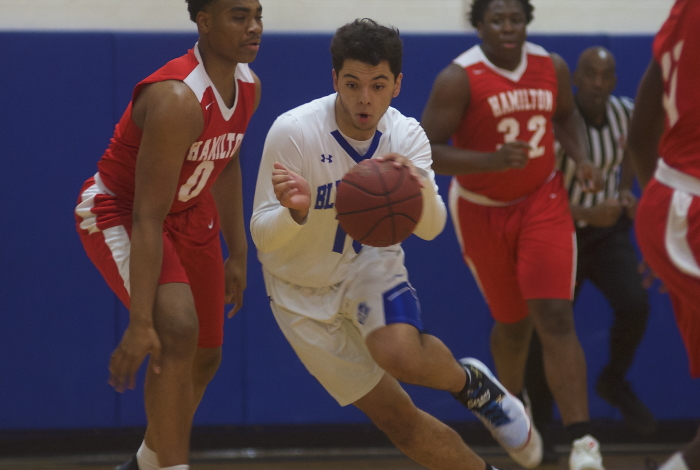 “We got off to a good start, but in the second quarter they shot really well, and turnovers hurt us,“ said Coach Joe Virgadamo. “Mame had a phenomenal game, and Dan has had two great games for us so far.”

The Blue Devils return four starters from last year’s squad, which finished 14-7 and lost in the sectional semifinal to Hamilton, the starters include senior All-Conference forward Matt Champlin; Diba, who was an All-League selection; senior guard Alex Kubik; and Santos. 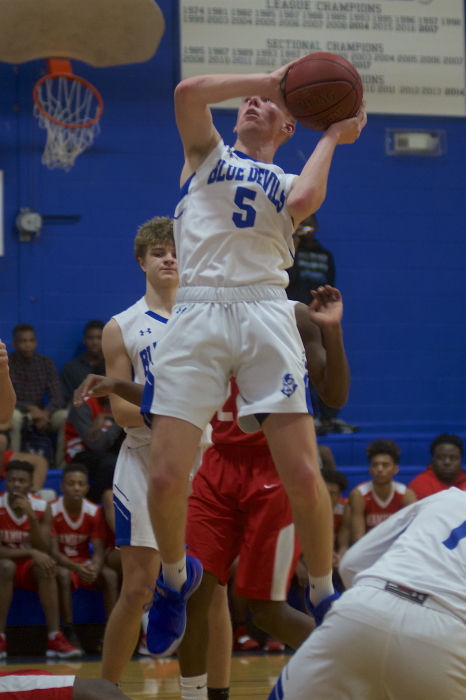 “Our goal is to be as balanced offensively as possible,” Virgadamo said. “Matt and Alex are both on the varsity for their fourth year, and Matt has the potential to be one of the best in the section. Alex has great vision and can score.”

Haldane hasn’t won a sectional title since 2016, after winning three in a row.

“Hamilton is the team to beat,” the coach said. “But we’ll get better throughout the year. Tuckahoe will also be good. The semifinals and finals are at the Westchester County Center this year, and that’s a big deal. That’s where it should be. The kids look forward to it, work hard, and they deserve it.”

Haldane will travel to The Leffell School in Hartsdale on Monday, Dec. 16, and to Tuckahoe on Dec. 20. Its next home game is Jan. 4.

Graduation also was kind to the girls’ basketball team, as last year’s squad had only one senior, Julia Rotando.

The Blue Devils return four other starters for first-year coach Jessica Perrone, who is taking over after Tyrone Searight took a leave of absence after being accused of workers’ compensation fraud. (Searight pleaded guilty to a violation in the case, and the Board of Education will decide on Dec. 17 whether to dismiss him. But the district has said Perrone, who coached the junior varsity and continues to do so, will be the head coach for this season.) 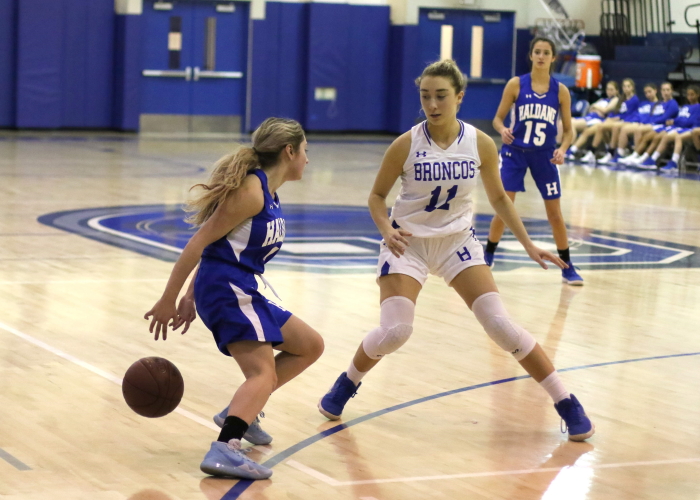 Olivia McDermott goes behind her back against Bronxville. (Photo by Scott Warren)

Haldane finished 5-14 last season but won its sixth consecutive sectional title before losing in the first round of the regionals to Millbrook.

“We have a team with six seniors, so we have a strong core, and they know the deal,” Perrone said. “They know what’s expected. I feel fortunate, and we’re hoping to get further in the postseason.”

The captains are seniors Bela Monteleone and Shianne Twoguns. They are joined by seniors Abigail Platt, Olivia McDermott and Sofia Viggiano, and sophomores Molly Siegel and Madison Chiera. Senior Olivia Monteleone (who sat out last year to focus on volleyball), juniors Essie Florke and Sydney Warren and sophomores Ella Ashburn and Marissa Scanga round out the lineup.

“I feel lucky to have Olivia returning,” said Perrone. “She’s our strongest rebounder, and she can also score. Bela is one of our strongest offensive players. McDermott is probably our best outside shooter and a scrappy defender, too.

“Our strength will be outside shooting,“ she added. “Most of the girls can hit that shot if it’s open. And we are a good fast-break team. We are working harder on boxing out and rebounding, and defensively we’ll be aggressive.” 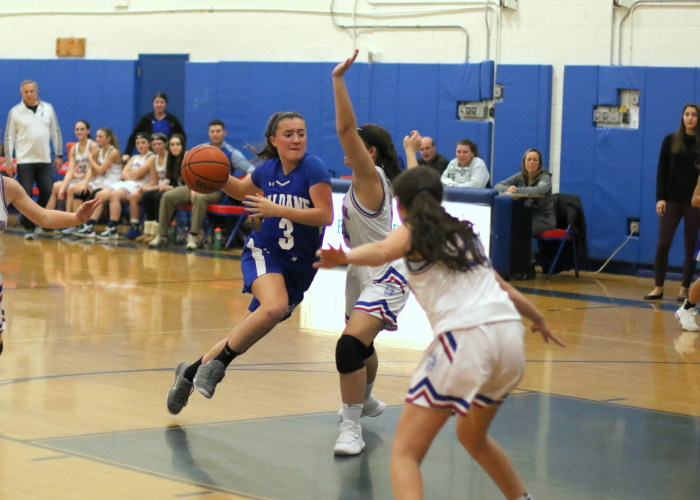 In addition, she said, “we have depth, we can play eight or nine girls, and they can all contribute.”

At Bronxville, McDermott led the team with 20 points and four assists, and Bela Monteleone had 19 points and six rebounds. Olivia Monteleone grabbed 16 rebounds to go with six points, and Chiera had eight points.

Haldane is scheduled to play in a tournament at Croton-Harmon on Saturday, Dec. 14, and in another tournament at Hendrick Hudson next week.