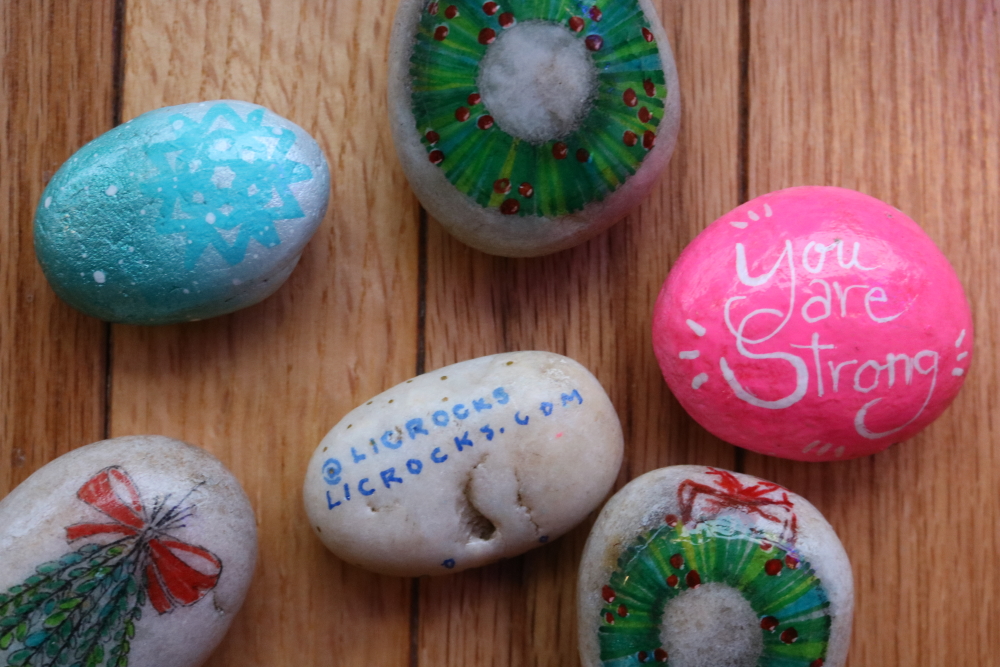 A sampling of rocks (Photo by M. Turton)

Last year, residents of Long Island City in Queens were mystified when hand-painted stones, many bearing messages, appeared in their neighborhood.

Now, these mysterious rocks are showing up in Garrison, Cold Spring and Beacon.

Acting on a tip from a reader, The Current tracked down the mother-daughter team behind the secretive stones. They agreed to meet on the condition they be referred to only as Rock Mom and Rock Girl because no one in Long Island City has been able to identify them. 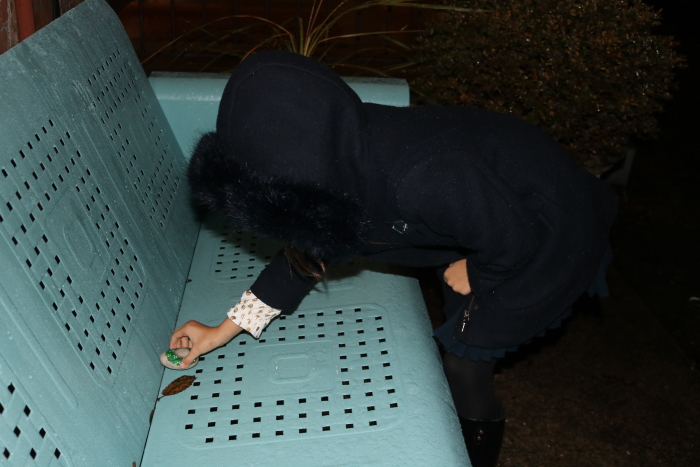 Rock Girl places a rock on the bench outside The Current office in Cold Spring. (Photo by M. Turton)

The team, which calls itself LIC Rocks, visits the Highlands often and recently decided to make its mark here. Stones have been placed at Garrison Landing, on Main Street in Cold Spring and on Main Street and at the waterfront in Beacon.

Cold Spring resident Ed Currelley found two rocks at Beacon’s Long Dock Park, both “hidden in plain sight.” One was simply painted beautifully but the other contained a welcome message. “I found a rock inscribed with ‘You are Strong’ at a moment when I needed the sentiment, at a low point in my day,” Currelley said. “The idea of LIC Rocks is wonderful: Giving without reward, encouraging people to open their hearts and paying forward.”

Both mother and daughter admit to asking neighbors who they think is behind the rock conundrum, as a bit of misdirection.

The adventure began last winter when the two were looking for a project to work on together that didn’t involve plastic. To date they have painted and placed more than 1,000 rocks, usually eight at a time, some with graphics, others with messages. When Rock Mom learned a neighbor was battling cancer, a “Stay strong — you can do this” stone was left at the person’s doorstep.

The biggest drop was on Easter, when they placed 150 “eggs” around Long Island City. Other holidays also have themes. At Thanksgiving rocks may have a “Grateful you are my friend” message. Skeletons were featured at Halloween. This year’s Christmas offering includes seasonal graphics.

Some rocks even have eyes that glow in the dark. “We always experiment,” said Rock Mom. “It’s never the same; we never plan.” 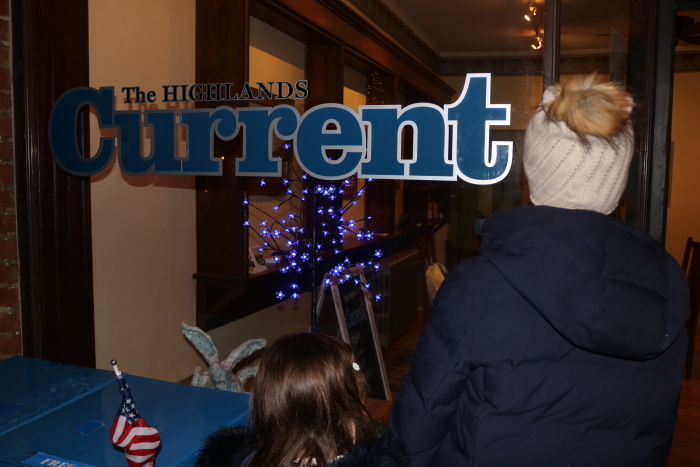 Others are painted but left blank in the hope the finder will add a message of his or her own. “We encourage finders to pass their rock on to others — or simply keep it,” Rock Mom said. Many new rock owners acknowledge their discovery by posting messages at LICRocks.com, Facebook or Instagram. (The rocks include contact information.) “People even post videos of themselves with their rock,” Mom said.

After the team’s visit to The Current office, 25 stones were added in Beacon and Cold Spring, with some discovered as early as the next morning.

A large number of rocks is occasionally left in one place on the Long Island City waterfront. “We should do that in Cold Spring and Beacon too,” Rock Mom mused, adding she sometimes puts hints online to aid searchers.

While the pair primarily work alone to keep their identity secret, they occasionally accept help. “Sometimes we use ‘secret agents’ to help place rocks,” Rock Girl said. “They say placing them is almost as much fun as finding them.”

The shared secrecy is a big part of the satisfaction for both mother and daughter.

“I like that we connect with people, but without them knowing who we are,” Rock Mom said.

“I don’t even tell my friends!” Rock Girl, who is in elementary school, added.

Her mom said they have been asked to consider sponsorship. “We wouldn’t want a sponsor; it’s our own little thing,” something she said costs next to nothing and can be shared even on a rainy Monday. “It’s fun the way it is.”

Asked if anything has surprised her about the project, “people’s kindness” was Rock Mom’s quick reply. “People are very respectful of the project and only take one rock; they’ll often give one to a small kid.”