How many people can say they grew up near Paleolithic caves?

Maria Lago can. A native of the Asturias region of Spain, she says the caves there continue to influence her as an artist many years and an ocean away.

“They say the first seven years of your life give you the knowledge of the rest of your life,” says Lago, who owns a studio and gallery on Main Street in Beacon. “One of the earliest memories I have is walking through the caves, as young as age 3. They gave me such amazing power. Even though I forget the details, somehow they return later, taking me back to that period of time when I was so sensitive and digesting everything.” 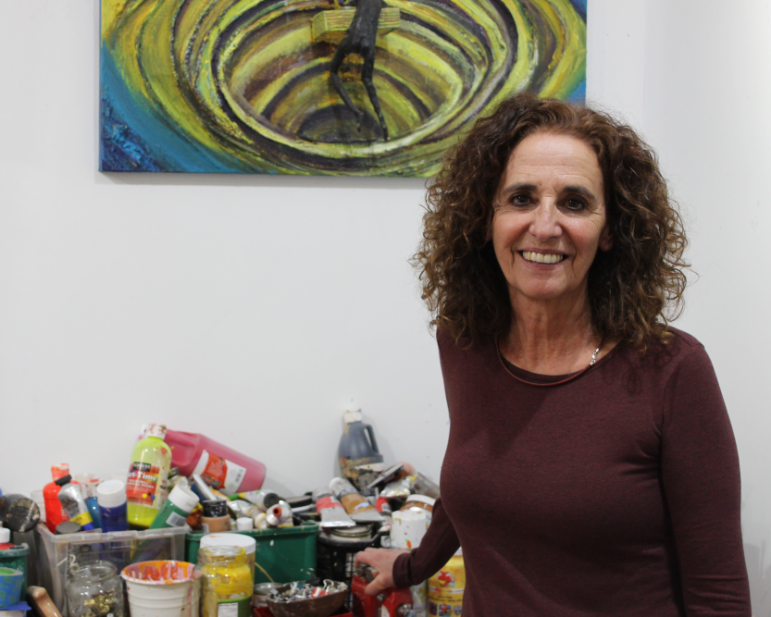 Maria Lago in her Beacon studio (Photo by A. Rooney)

Lago’s studio — named Maria Lago Studio 502, for its owner and street address — has been open for eight years following a move from Mamaroneck. “My family wanted to turn a new page,” she says. “We had always loved the Hudson Valley and were looking for a more artistic place to live.”

Finding her current work space aided the cause. Lago divided a single large room into a back studio and a front gallery. The studio is crammed with the tools of her trade: overflowing tables of paint tubes, and sculpture fragments, and tacked-up paintings vying for space on the walls. The white-walled gallery displays Lago’s large color paintings.

A door, often ajar, separates them. The setup allows Lago to work in her studio, then shift into gallery-owner mode at the sound of the front door.

“In the beginning, I wasn’t sure I wanted the public in,” she says. “I was private, but it’s turned out to be good. The best thing about having the gallery is hearing people’s comments. Nobody sees the same thing. It opens whatever it is in your mind — what you want to see, need to see.” 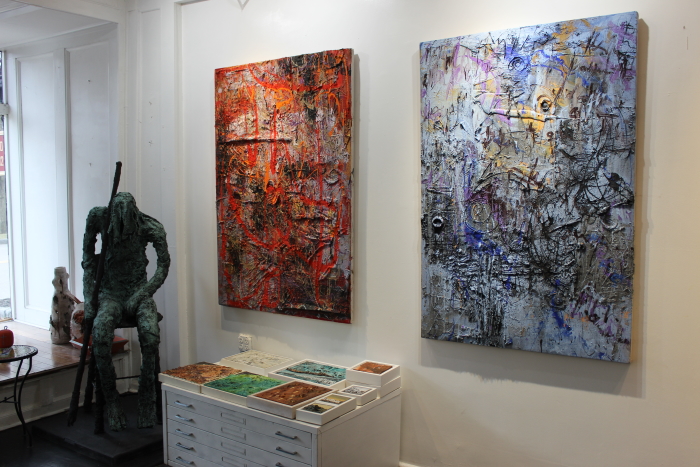 Paintings from Lago’s Ideographic series, along with sculptures and smaller works (Photo by A. Rooney)

For the past 20 years, most of Lago’s paintings have been parts of series. The themes generally come to her before she paints, although sometimes it happens spontaneously while she paints.

“When I start, I know it’s not enough,” she says. “It’s like writing one poem, needing more.”

She began one series, Exodus, eight years ago, as a “personal thing, thinking of the exodus of my life. This is different from the stories we see on the news every day. I didn’t need to escape Spain. I left because I wanted to, but you still miss your roots. I started with small figures and a huge landscape, and at that time my thoughts were that the landscape would be here forever, but not the people. Now that has changed; it could be reversed.”

Because she uses multiple paint layers, and makes large works — “the material is heavy, so I can’t do small paintings,” she explains — Lago’s paintings take a long time to dry, so she usually works on more than one at a time. Most series consist of 10 to 20 paintings. “When I’m done I know I’m never going to come back to that,” she says.

Lago’s personal exodus occurred because of an American — her husband, whom she met in Madrid. “He traveled for a year through Europe. We met, and I’ve been here for 35 years,” she recalls. 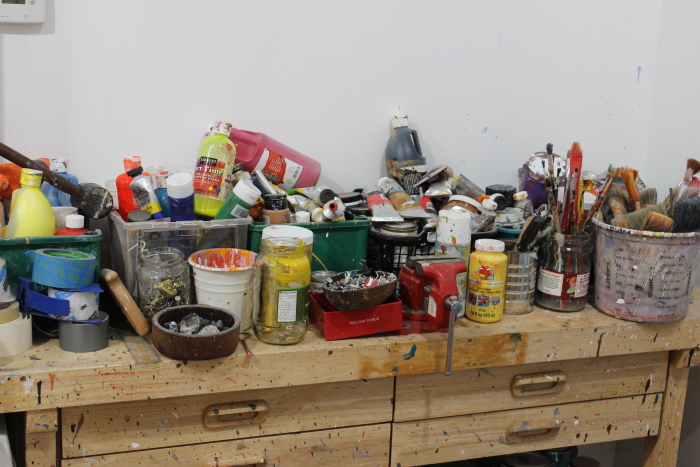 A table in Maria Lago’s studio (Photo by A. Rooney)

At the time, Lago was a fine arts student at university, taking classes in printmaking, sculpture, drawing and painting. “It was very intense, which I loved,” she says. “I started taking special classes in art at around 12, but in high school I wasn’t exposed to anything. For me, university was a chance to explore everything. It’s great to do different things, because when I’m stuck in a painting, I turn to sculpting or etching. I also mix materials. Painting is more crazy, more physical, but I must keep working.”

Arriving in the U.S. at age 23, Lago fell in love with New York City. “Coming from Madrid, there was a lot of life there, but here! The galleries in Soho, the graffiti, so many foreigners made me so comfortable. I started meeting people from around the world. I’ve never found that anywhere else.

“I have two kinds of people who buy my work,” she says. “The first happens more often and is random. It’s usually just one person who comes in, looks at one painting, asks how much is it, then says ‘I want it.’

“The others are people who come back three or four times. They tell me they don’t have the money, then buy a smaller work. A year later, they come back and buy bigger. The thing is, I’m not a salesperson, but it’s not important because people love to talk to the artist.” 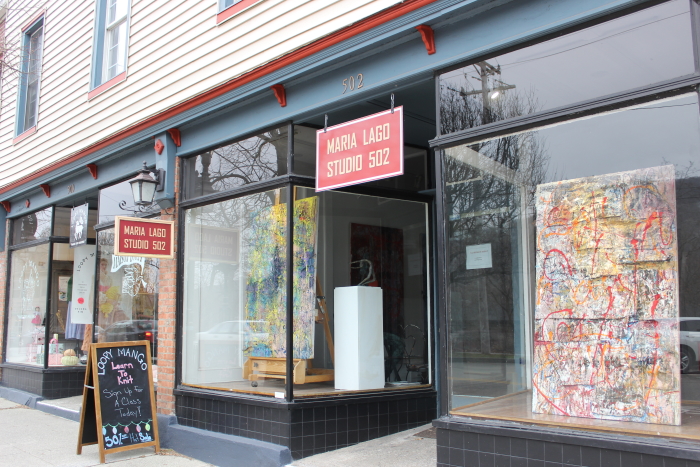 Maria Lago’s gallery is located at 502 Main St. in Beacon. (Photo by A. Rooney)

As one of the few longtime gallery owners remaining in Beacon, Lago has been through ups and downs.

“The first three years here were great,” she recalls. “People were looking for art. Then the city grew, but the galleries started to close because they couldn’t afford the rent. In the last three years it’s started coming around again, but still, people come in, usually from the city. They’ve come up for the day to Dia and ask me where all the other galleries are. They tell me they expected more. What can I say?”