Senior Javon Dortch and freshman Chris Crawford, who each wrestle for Beacon at 106 pounds, both qualified for the Section 1 tournament, which opens Saturday (Feb. 15) at Sleepy Hollow High School.

Crawford (32-3) won the divisional tournament on Feb. 8 at Arlington (including his 100th varsity victory) and Dortch (23-7) finished fourth. The top four wrestlers in each weight class advance.

“A lot of the seniors — Grace Affeldt, Analiese Compagnone, Skyler Kurtz, Anita Rodriguez, Dior Gillins and Catherine Mitchell — have been with me since the seventh grade, and we did not go to the playoffs last year, so I’m happy we are fulfilling that goal,” said Coach Christina Dahl. “When we stay focused, we can compete. We have some experience; we just have to come ready to play.”

The Haldane girls won at North Salem, 50-45, on Feb. 5 to close their season at 10-10. Shianne Twoguns led the way with 19 points and four assists, Maddie Chiera added 18 points, four rebounds and three steals, and Molly Siegel and Liv Monteleone each had 10 rebounds.

After finishing the season with three consecutive wins, the Blue Devils are the No. 2 seed of four teams in the Section 1, Class C tournament and will face the Leffell School (9-8) on March 3 at The Westchester County Center. The winner will advance to the title game on March 7.

At the Section 1 championships on Feb. 11, Beacon junior Stephen Quintero took ninth in the 200-yard freestyle in 1:49.40, setting a school record. 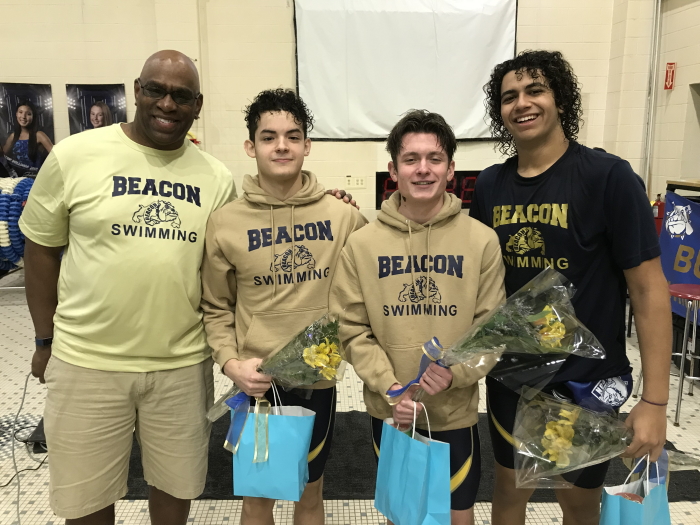 Senior Selena Virtuoso will represent Beacon as one of six members of a Section 1 all-star team when it competes on March 14 at the state tournament in Syracuse. She also qualified as a sophomore in 2018. Her season average was 195.