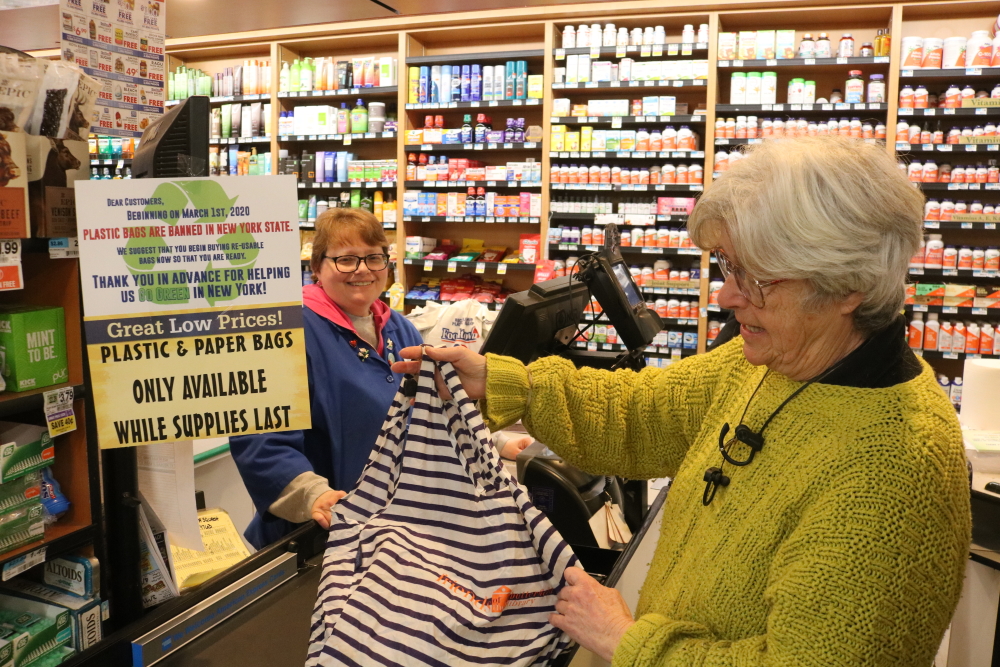 Ruth Eisenhower (right) of Cold Spring shows off her cloth grocery tote at Foodtown on Feb. 26. (Photo by Michael Turton)

Beginning Sunday (March 1) single-use plastic bags will be banned in grocery stores, drug stores, malls and at any other retailer that collects state sales tax, including in the Highlands.

Paper bags don’t have to be offered, although retailers have the option of providing them and can charge a fee for each.

Some local retailers, including Foodtown in Cold Spring and Key Food in Beacon, are adding heavier-duty, washable and recyclable bags. Key Food said it would charge 20 cents for plastic bags that can be used at least 125 times and 5 cents for each paper bag. The store also sells reusable cloth bags for 99 cents.

At Foodtown, Co-President Noah Katz said the store has been selling thicker plastic bags but will discontinue those in favor of “several varieties of reusable bags for varying price points” that will be available within the next week.

Gov. Andrew Cuomo signed the ban into law on Earth Day 2019, and the state Department of Environmental Conservation has since distributed more than 270,000 reusable bags to low- and moderate-income communities with the help of Feeding New York State, the state’s food bank organization. Eight other states also restrict the use of plastic bags.

Dutchess County passed its own single-use plastic bag ban that took effect on Jan. 1, but the county did not enforce penalties during the first two months of the year before the state law was implemented. 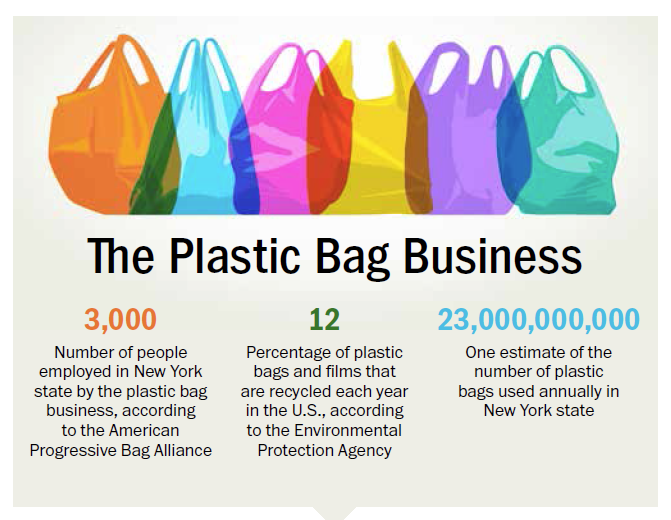 Mo Dabashi, a Key Food manager, said the grocery had been giving customers 5-cent credits for each reusable bag they use, which he felt helped prepare most shoppers for the ban. Still, he said, the store has heard complaints about the Dutchess regulations from shoppers “who didn’t think there was any reason for the ban.”

Foodtown has signs at its checkouts and entrance reminding shoppers that the ban takes effect on March 1 and they would need to bring their own bags.

New Yorkers use an estimated 23 billion plastic bags annually, and about 85 percent end up in landfills, recycling machines, waterways and streets. The DEC estimated that each bag is used for only 12 minutes before being disposed of.

The ban is not absolute. Among its exemptions are plastic bags used to wrap uncooked food that could contaminate other items; bags used to wrap delivery or takeout meals; bags for bulk-item purchases, including fruits or candy or, in hardware stores, nails or screws; bags used in newspaper deliveries; trash bags; food storage or sandwich bags; garment bags, such as those used by dry cleaners; and bags provided by a pharmacy to carry prescription drugs.

Stores will also be required as of Sunday to collect clean, dry plastic bags (including bread bags and other recyclable varieties) that cannot be picked up with residential recycling, and to keep records showing the bags were recycled.

In 2017, Cuomo created a state Plastic Bag Task Force, which analyzed the impacts of single-use plastic bags and provided legislators with options for a statewide solution. Approximately 2,500 public comments were collected during a 60-day period last year before the final regulations were released in November.

One thought on “It’s Time: Bring Your Own Bags”