But legislator says employees asking for tests before return

Ken Clair, commissioner of the Bureau of Emergency Services, told a May 12 session of the Legislature’s Health-Environment Committee that personal protective equipment (PPE) “requests have slowed down. That seems to be a good sign.” Nonetheless, he cautioned, around the county first-responders “are still dealing with more EMS [medical] calls than fire calls.”

Dr. Michael Nesheiwat, the county health commissioner, added that residents generally “are not looking for diagnostic testing as much as before” but seem more interested in knowing if they harbor COVID-19 antibodies.

As of Thursday (May 21), the region still needed to meet two of the seven criteria: a sustained decline in daily hospital deaths over 14 days, or a three-day rolling average of five or fewer new hospital deaths daily; and to have in place about 1,800 tracers, who identify those who came into contact with someone confirmed to have COVID-19.

Nesheiwat said his department is working “aggressively” with the state on more intensive tracing efforts. He agreed with a suggestion by Legislator Nancy Montgomery, who represents Philipstown, that “we should focus more on that.”

According to Nesheiwat, tests for COVID-19 “are now widely available” in Putnam at the periodic drive-thru clinics the Health Department conducts at its Brewster headquarters, from private physicians and medical practices, and at Putnam Hospital Center in Carmel.

The county has held six drive-thru clinics for residents with symptoms, giving priority to first-responders and medical personnel, and plans to have another. 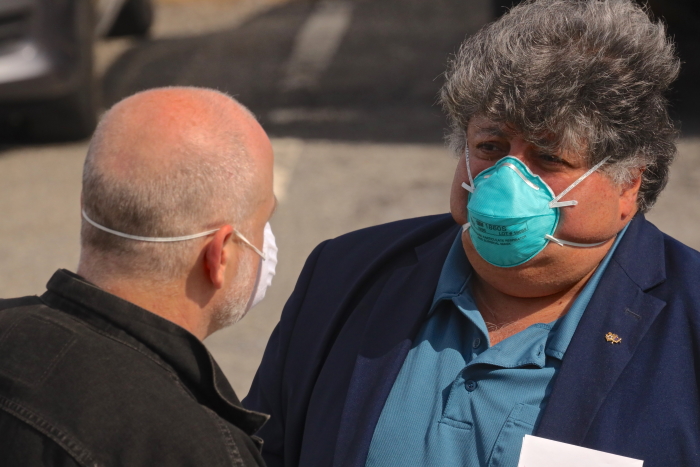 He recalled that for a recent clinic, the Health Department had 150 tests but only 86 people wanted to be tested, so the department staff called residents who had previously sought tests and tested 141 people. The public is “now more interested in antibody testing” than in the basic test for a COVID infection, he said. However, “I don’t know the validity of the antibody test,” which the county does not offer, anyway.

In the drive-thru clinics, 70 percent of those tested were from eastern Putnam, he said. Nesheiwat said he has been advised that creating test sites other than in Brewster is “not feasible because of the equipment, the computer access, the nurses we need” are at the agency headquarters.

On May 7, in emailed responses to questions from The Current, Nesheiwat explained that his department initially approached the state and Nuvance Health, which operates Putnam Hospital, Vassar Brothers Medical Center in Poughkeepsie, Northern Dutchess Hospital in Rhinebeck, and four hospitals in Connecticut, about establishing “a permanent drive-thru testing site within the county. In response, the state and Nuvance determined that Putnam County residents could access the regional sites established by the state as well as the Nuvance sites in neighboring counties.”

He also wrote that before New York began readily providing tests, Putnam bought 400 from a company for $1,500. He added that Putnam must ensure its tests can be processed by the state’s Wadsworth laboratory and that a private laboratory would charge $50 to $75 per test.

Clair and Nesheiwat reported that the same day the Health Committee met, the state sent more than 1,000 tests.

Clair said the Bureau of Emergency Services acts as the clearinghouse for personal protective equipment in Putnam.

Montgomery proposed that its distribution chain include county-founded agencies that provide mental health care, anti-drug addiction programs, aid to women and children in distress, and similar social services. “I’m just surprised that we’re not” supplying it already, she said. “They are all looking for PPE.”

Clair said that agencies must complete an online survey listing their needs, and that “we’re ready” to help the groups Montgomery mentioned. “We have plenty of PPE to go to anybody.”

Ken Clair, the commissioner of the Bureau of Emergency Services, told county legislators last week that, as of May 12, his agency had distributed:

Montgomery also observed that Putnam’s COVID-19 data only mention cases at Putnam Hospital, though residents of western Putnam typically rely on NewYork-Presbyterian Hudson Valley Hospital in Cortlandt Manor and Vassar Brothers. She asked the Health Department to contact those facilities “if not daily then three times a week to see how many Putnam residents they’ve admitted” with COVID-19.

“We’ll investigate and get back to you,” Nesheiwat promised.

Montgomery said some county employees had told her they wish to be tested for COVID-19 before the county, which has been promoting a general reopening, resumes regular office hours.

Legislator Paul Jonke of Southeast wondered “why employees are going to a legislator and not the Health Department if they’re demanding tests.”

Legislator Ginny Nacerino of Patterson said she “was taken aback,” too, to learn employees are avoiding “the proper channels” of authority. “That just doesn’t make sense,” she said, urging Montgomery to identify those involved.

Legislator Neal Sullivan of Carmel-Mahopac said employees who want tests typically would alert a union leader because “the union is going to bring it to the Safety Committee,” which includes union representation and coordinates county government reopening plans.