Disciplinary histories will be available to public

Police departments in New York will no longer be able to deny public access to the disciplinary records of officers under a law enacted by Gov. Andrew Cuomo on Friday (June 12) in response to the death of George Floyd in Minneapolis, who died after an officer kneeled on his neck for nearly nine minutes.

Democrats in the Senate and Assembly passed bills earlier this week to repeal Section 50-a of New York’s civil rights laws, a 44-year-old statute that kept confidential “personnel records used to evaluate performance toward continued employment or promotion” for police and corrections officers, firefighters and paramedics.

Passed in 1976, the law had been used by police departments to limit access to the complaint and disciplinary records, over the protestations of defense attorneys, criminal justice advocates and the state’s Committee on Open Government.

Capt. Lisa Ortolano, a representative for the Putnam County Sheriff’s Department, cited the confidentiality law in an April memo to Legislator Paul Jonke, chairman of the Protective Services Committee, while disputing that lawmakers were “entitled” to see the disciplinary records of deputies.

The records are now subject to release through the Freedom of Information Law, with personal information such as addresses, phone numbers and Social Security numbers redacted. Departments can also withhold reports of minor violations of administrative rules. 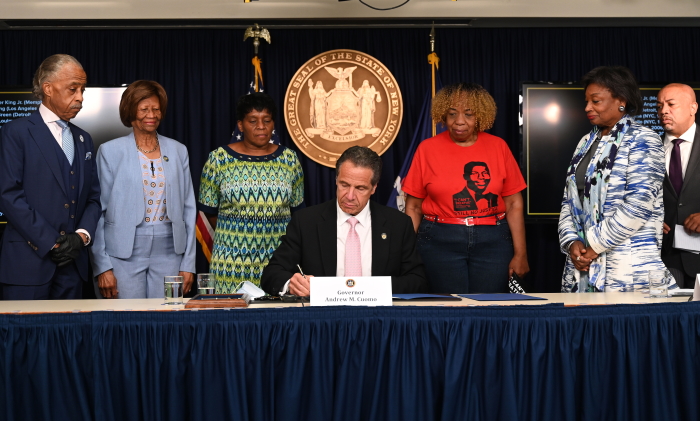 Gov. Andrew Cuomo on June 12 signed an order requiring local police agencies to develop a plan, based on community input, that includes limiting the use of force. (Photo by Kevin Coughlin/Governor’s Office)

In 2014, the Committee on Open Government said that while 50-a was designed to be a “narrow exemption” to the FOIL law, it “has been expanded in the courts to allow police departments to withhold from the public virtually any record that contains any information that could conceivably be used to evaluate the performance of a police officer.”

In addition to repealing 50-a, the Assembly and Senate passed  nine other laws to regulate police behavior, including a ban on chokeholds.

“It was time to help restore public trust in our criminal-justice system,” said Jacobson, who voted “yes” on all 10 bills.

Galef also voted yes on the bills. She noted on Thursday (June 11) that before Floyd’s killing, the COVID-19 pandemic had already raised questions about racial inequities in health care and wages, “and then you get to the compiling of all of these events that have gone on around with black men being killed on the street. Sometimes it’s timing, and this was the time.”

In a statement on Thursday, Serino said she could not “in good faith” vote to repeal 50-a. While there must be “zero tolerance for police brutality, racism, hate or violence,” she said the bill “goes too far in allowing for the release of false accusations, unfounded and unsubstantiated claims.”

The law was created to “ensure first responders could safely testify in court on behalf of victims,” said Serino, who accused lawmakers of “rushing through legislation negotiated behind closed doors that will have serious ramifications when it comes to public safety.”

On Monday (June 8), Democrats in the U.S. House and Senate introduced a bill that would ban chokeholds, prohibit racial profiling by police and establish a national registry of officers fired for misconduct.

Rep. Sean Patrick Maloney, a Democrat whose district includes the Highlands, co-sponsored the Justice in Policing Act in the House. “Those who support honest, community-based law enforcement, as I do, can agree that tragedies like the killing of George Floyd require these sensible reforms,” he said in a statement.