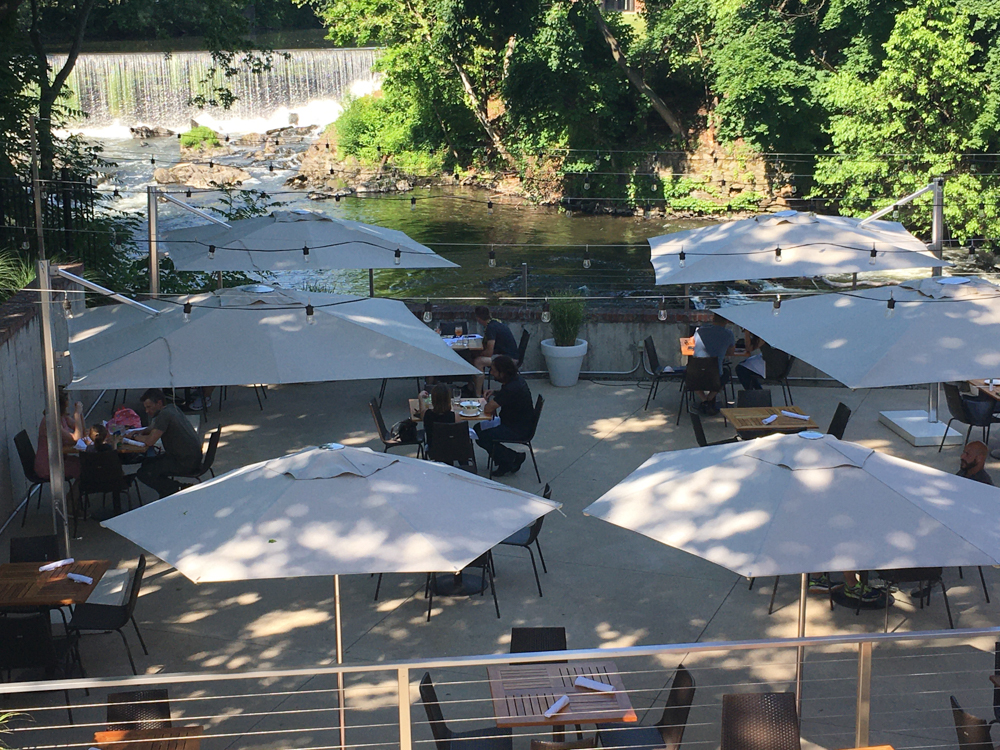 The patio tables at the Roundhouse in Beacon, which reopened on June 9. (Photo by L. Sparks)

For the first time in months, the bucolic Fishkill Creek waterfall outside the Roundhouse Beacon restaurant has some company.

Five minutes into the Roundhouse’s reopening at 3 p.m. on Tuesday (June 9), couples and families were arriving at the outdoor patio for meals. By 7 p.m., the tables were full.

But Tuesday marked, in the Mid-Hudson Region, the beginning of Phase 2 of the state’s four-phase reopening plan, which allows restaurants to begin offering outdoor dining as a prelude toward a return to indoor dining. In Beacon, tables were moved onto the sidewalk in front of the Yankee Clipper Diner; a tent was erected in the parking lot of the Melzingah Tap House; and sidewalk seating at Max’s on Main stretched around the corner onto North Walnut Street.

The state also allowed churches in Phase 2 to resume indoor services at 25 percent of capacity, and a number of them, such as St. Joachim & St. John the Evangelist in Beacon, took advantage. The church resumed morning Masses on Wednesday (June 10).

“The parish is more like a family,” said the Rev. Richard Smith, its pastor. “So it feels like a family reunion.”

During the shutdown, many local restaurants have been allowing customers to call-in orders and pick up their food outside. A return to serving seated customers was not expected until Phase 3 of the state’s plan, but Cuomo unexpectedly announced last week that outdoor dining would be permitted in Phase 2 as long as social-distancing and other health and safety requirements were met.

Roundhouse had received quick approval for the federal Paycheck Protection Program, a COVID-19 relief program under which businesses could receive loans to keep employees on their payrolls as unemployment skyrocketed during the pandemic. (The Current also received a loan under the program.)

With that funding ending this week, Roundhouse’s employees would have been looking at unemployment at least until Phase 3, Guerra said.

“We don’t have to do that now,” she said. “We can keep everybody on payroll and working.”

The Roundhouse is also improvising to make use of its outdoor creekside event space, normally used for weddings and other private events. The space is being transformed on Fridays, Saturdays and Sundays into “Smoke on the Water,” a pop-up outdoor barbecue restaurant featuring cherry wood-smoked ribs and brisket. It will open on June 19.

“Instead of throwing up our hands and saying that business is not there this summer, and laying off those staff members, we figured there’s got to be something that we can do,” Guerra said.

Like Roundhouse, Hudson Hils Cafe in Cold Spring had to remove tables to comply with the state’s mandate that there be 6 feet of space between them. On Wednesday, the restaurant began serving diners at four tables on its covered porch, after having removed five.

People are happy to again be able to dine out, said co-owner Hilary Hayes. “So far people have been pretty respectful in terms of keeping their masks on and social distancing. So far it’s positive.”

Phase 3 is expected to begin in the Mid-Hudson Region on June 23. In addition to allowing the reopening of personal-care businesses like massage therapists, hair salons and tattoo parlors, restaurants will be able to offer indoor dining at 50 percent of capacity.

The Yankee Clipper in Beacon had a “bunch” of customers Tuesday after setting several tables outside, but owner Katina Pertesis and her staff are already planning for Phase 3.

“We have it all figured out — what we’re going to do and how it’s going to look,” she said.

Optimism is warranted, but local restaurants likely face a “long road to recovery” after the shutdown, said Guerra. “I don’t think there’s a person in this industry who thinks that it’s all-good now.”

Local churchgoers are enjoying the return of another kind of nourishment. 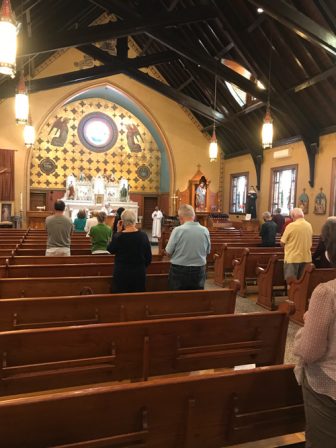 About 30 parishioners gathered on Tuesday (June 9) at Our Lady of Loretto for the first time since March. The Cold Spring church is holding Mass at 8:15 a.m. daily, except on Sunday. (Photo by John Scherer)

In addition to St. Joachim & St. John the Evangelist, Our Lady of Loretto in Cold Spring opened its doors this week. Dozens of people attended Mass on Tuesday, including longtime member John Scherer.

“I was looking forward to it since the day they said we couldn’t go to church,” he said.

St. Joachim & St. John the Evangelist held 7 a.m. and 8 a.m. Mass on Wednesday after preparing by marking off pews to maintain social distancing, buying hand sanitizer and recruiting ushers to help with seating.

One parishioner brought Hershey Kisses to give out “because she couldn’t kiss [people] for real” during the shutdown, Smith said. The church also received notice from the Archdiocese of New York that weekend Masses can resume, and it held on Wednesday its first funeral since early March, he said.

“People have been dying alone all these months,” Smith said. “So it’s wonderful that you’re able to grieve in a human way.”