Ending a debate that lasted nearly three years, the Nelsonville Village Board voted 4-1 on Monday (July 20) to add a 4.1-acre parcel on Secor Street to the easement that protects the Nelsonville Woods from development.

Trustee Dave Moroney cast the sole “no” vote against including the Secor property in the easement, administered by the Open Space Institute over the 112-acre woods. The 4.1-acre Secor parcel had once been eyed as a cell tower site.

The board also added 2.9 acres of village land along Gatehouse Road to the easement, which was established 20 years ago. 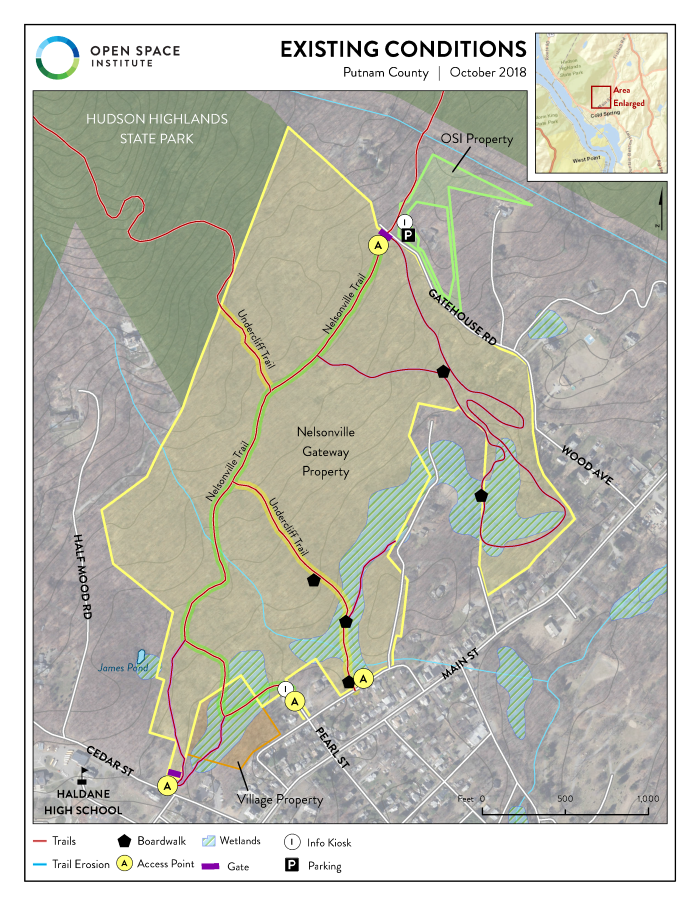 The roughly hexagonal 4-acre “Village Property” on the lower left is being added to the conservation easement protecting the Nelsonville Woods under an agreement with OSI ratified by the Village Board.

The easement agreement allows the village to place a modest building, such as a washroom or education center, or create a playground or tap underground water, on the Secor acreage but forbids its use for a cell tower.

Village officials had presided over several often-heated public sessions on the issue since the fall of 2017. The Village Board’s composition changed in the meantime, in part because of dissatisfaction with prior members’ handling of the issue and a cell tower proposed for Rockledge Road.

Little discussion occurred on Monday and the board did not entertain public comment before the vote. One resident later maintained that three board members who live near the Secor parcel should have abstained from voting. But another resident praised the board for “protecting us from things like cell towers” on Secor Street. Letters to the board also backed the easement enlargement.

In January, anticipating 5G technology’s widespread use for data transfer, the board began considering a law to regulate installations. It held a public hearing in February.

The 21-page law adopted Monday closely corresponds to the draft. According to its introduction, it was enacted to “provide for new wireless technologies,” such as small-cells and distributed antenna systems (DAS), encourage the placement of small wireless telecommunications facilities (SWTFs) on existing structures; protect residents and businesses from unspecified “potential adverse impacts”; and manage SWTF development.

For basic installations, the law compels 5G companies to obtain a permit from the Planning Board. It also prohibits the installation of 5G or SWTF poles on single-family houses, duplexes and any “accessory structure” on a residential lot.

Likewise, it bans SWTF installations within 50 feet of any occupied residential structure (the draft called for 30 feet) and says no SWTF will be approved if it has “a significant adverse impact on scenic or historic resources.” The Planning Board can require that SWTFs be painted to blend in.

The law also requires applicants to demonstrate “the need for the SWTF to provide service primarily and essentially within the village” and justify the height of antennas and structures.

Dove Pedlosky, the trustee who led the drafting effort, noted that the village is constrained by federal law when attempting to control telecommunication projects but that, under the circumstances, the board made the law “as strong as we could. I do think it protects the village.”