In 2016, Michael Rutkoske was one of three newcomers elected to the nine-member Beacon school board during a time of upheaval in the district. Over the next four years, newcomers filled five of the six other seats. 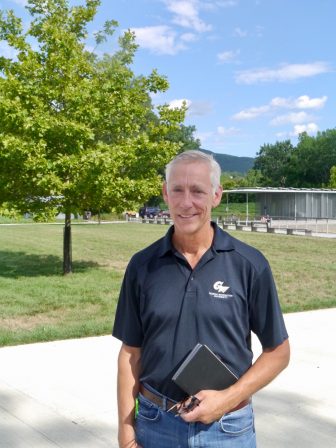 You announced your resignation from the board last month, a year into your second term. How did you arrive at that decision?

I have more responsibility at work, even with it being remote, and I’m also doing a lot at my church [Christ Church United Methodist]. My wife, Melissa, and I have been working on a project that you may hear about soon. Plus, the district is doing well. With all of those factors, it felt like time to say goodbye.

Four and five years ago, Beacon school board meetings were must-see TV. Not that you need to be reminded, but there were shouting matches, parents with picket signs, sessions that went past midnight and the infamous meeting with 400 spectators but no quorum. What happened to change that atmosphere?

When we [Rutkoske, Antony Tseng and Meredith Heuer] were elected in 2016, we wanted stability. The district had nine superintendents in however many years [10], and we needed it to become an anchor position. We spent a lot of time listening to the public. Over time, participation at meetings has tailed off. You always want to have public involvement, but back then there were so many people who didn’t feel they were being heard, and, I believe, had no confidence in the district.

How do you feel the district is doing now?

There’s a lot of momentum. Dr. [Matt] Landahl has a great plan to bring the district to excellence. We’ve laid out a pathway of three-year views, that is, here’s our budget this year, but where do we want to be in three years? What’s the curriculum we want and how are we going to get there? He’s a leader with a strategic view, and the board is continuing to build upon that.

One of the big accomplishments was getting Chromebooks for every student. When it was presented to us it was going to happen over four years, and I asked, “What’s it going to take to do this in two?” We got to 1:1 [computer for every student] last fall and it allowed us to address distance-learning this spring.

When we came in, there was clearly a path we had to take. Now there’s a new plateau. Listen to things going on in the country and in Beacon that are important to parents and put plans in place to address them.

Not everyone was happy with the turnover from old to new. Was it difficult to remain objective in the face of criticism?

Not at all. We had goals — to hire a new superintendent, to change our legal representation, to address a backlog of contracts that had expired. We tried to lay the foundation for the district to follow the city as it grew.

What stands out from your term?

The capital project was exciting. That’s what I do for my job, so pulling that together, communicating with the public and then seeing it come to fruition was rewarding. The new learning spaces are fantastic, and seeing the community come together last fall for a game under the [newly installed] lights was one of the most moving experiences I had while on the board.

Your colleagues ribbed you during your last meeting for being a stickler for details. Does every board need someone like that?

It’s my nature. I work in nuclear power and we’re deep into details. Understanding how things work and the scope of things like contracts is how you make sure you get what you want for the money you’re spending. It’s always good to have somebody keeping an eye on that.