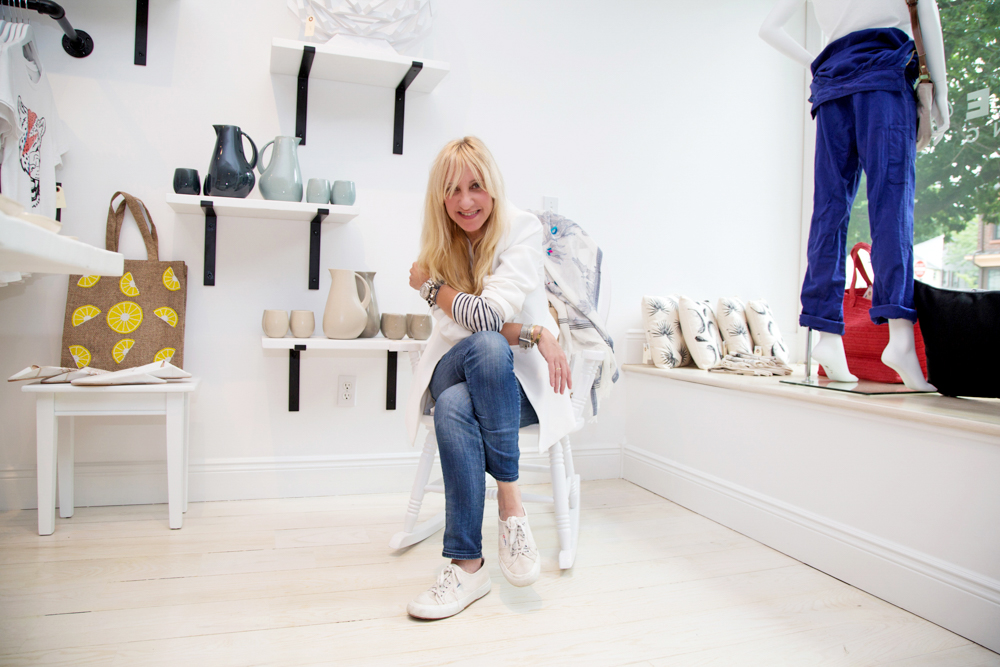 Amid pandemic, a new clothing store and cafe

Jacqueline Azria grew up in Paris and spent years in Manhattan before moving with her husband last year to Brewster.

And that’s how she found Cold Spring, where last month she opened a women’s clothing store called Paulette, which is named for her mother and includes a coffee and pastry shop that opens weekdays at 7 a.m.

“I fell in love with the town,” she said of the couple’s day trips to the village. “I’ve been in America for 35 years and love the idea of the classic American beauty. This town has so much of that — the beauty, the story, the history. The atmosphere reminds me of the movies I watched as a child. It still feels faithful to its own identity.”

Paulette, at 114 Main St. (the former home of the marketing firm Tightrope Interactive, which moved to Beacon), stocks apparel, accessories and home goods. 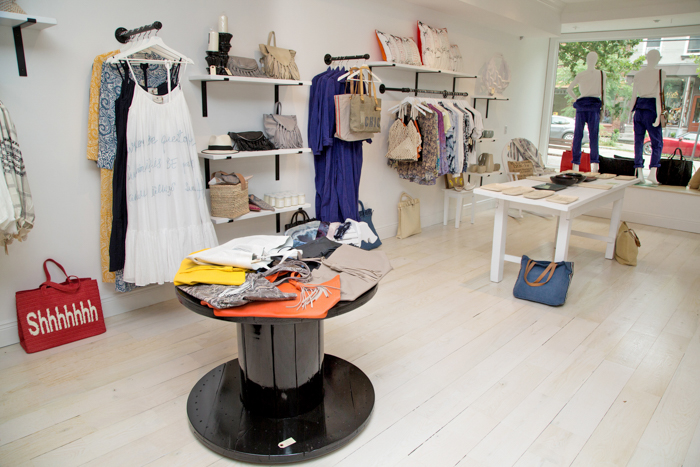 Inside Paulette (Photo by Gabrielle Toth)

Its offerings, many displayed on sculptural, repurposed wood tables made by M. Francis Millwork (also for sale), include pieces from clothing lines like Saint James and Johnny Was, along with Bensimon shoes, plus breezy pillows, scarves and more by illustrator Izak Zenou for La Maison Izak.

There are classic French sailor shirts, ceramics from Franca, homewares from Archive NY, Moroccan shoes, lots of reasonably priced jewelry and Paulette’s own Second Life collection of objects transformed from antiques to something contemporary.

The cafe has coffees from Irving Farm and teas, bread and pastries from Bread Alone, and other goodies from Il Pastaficio, with seating at the front.

“I like the idea of a non-linear, multidimensional place where you come for a coffee and then see a T-shirt,” Azria says. “Everywhere you look there is a mix of relaxing, stimulating fun; from pastries to tote bags, you’re surrounded by many things that can make you happy.” 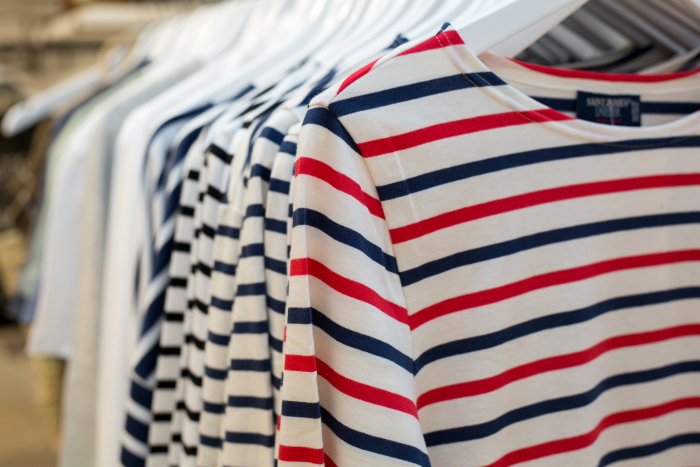 Azria says she was “forever thinking about opening her own place” during her years as an editorial creative director. “I’ve been working in magazines forever but that was always the dream — to create a place where people can choose clothing and accessories to bring their own stamp to their look, at prices that are not Prada. I want to help a woman figure out what she’s going to ‘say’ any given day. I don’t want her to feel she is having a shopping experience at a store that dresses women in clothes which are like uniforms.

“The dream is for people to walk in, fall in love with something, look at the tag, expect the worst and go, ‘Oh, wow, the price is great.’ I don’t think fashion is superficial — it’s what one presents every day. It’s not neurosurgery, but it’s important in its own way.”

Azria, whose mother was a hat designer and whose father was a lawyer, says she was a late bloomer. 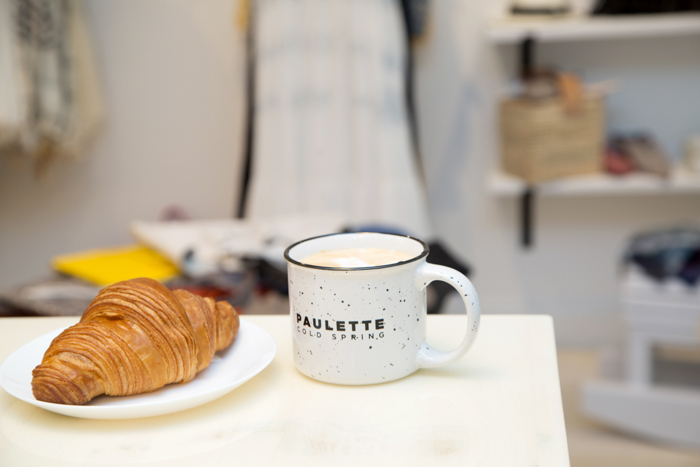 The cafe has coffees from Irving Farm and teas, bread and pastries from Bread Alone, and other goodies from Il Pastaficio (Photo by Gabrielle Toth)

“My dad thought I had the brain for law, so I went to law school, but my mom passed away when I was young and I decided to quit law school and assist at a magazine instead,” she says. “I did a brief stint in public relations, met a fashion editor, asked her if she wanted an assistant and discovered a world I loved because of the power of it in ways you don’t realize. For example, you can swap a pink-striped shirt for the flowy tee and suddenly the impact of the outfit changes. It can be magical.”

Although she did not yet have a green card allowing her to work in the U.S., Azria met someone from Seventeen who figured out a way to hire her. “It was the beginning of many good things,” she says. “I’m so grateful to be here and to have met so many good people who have given me so many opportunities. So much is through connections. If you work hard enough in this country, people give you chances.”

By the time of the 2008 economic crash, Azria was creative director at Cosmo Girl. The magazine folded and she moved to Women’s Health, then freelanced for Oprah and other magazines and did art direction for Eddie Bauer. 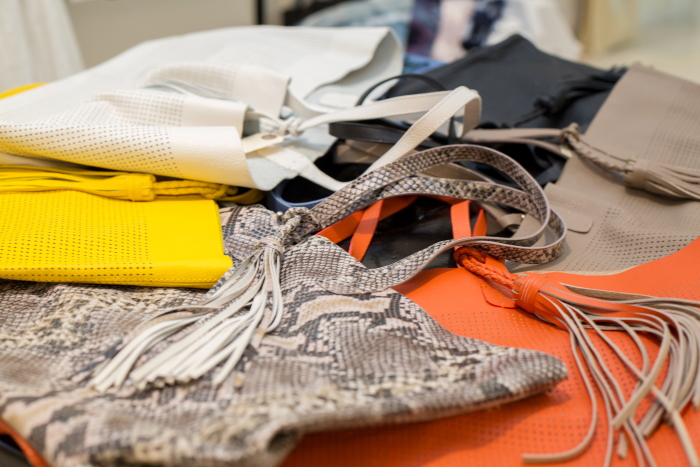 “One in every color, please” (Photo by Gabrielle Toth)

When the shutdown began earlier this year, she was about to leave for an assignment from Eddie Bauer, but the trip was canceled. “Even though it was terrible timing, I wanted to pursue my dream now,” she says. The cancellation “gave me the kick in the butt. Having been in corporations forever, I knew it was good as a woman to be carrying this whole thing alone on my shoulders.”

Azria admits she’s been “tempted to pull the plug” on Paulette at times because of the shutdown but says now “we all need a smile. We’ve all been scared for months. My dad was an absolute optimist; I am the same. I want to believe that there still is a joy of yes — shopping, being together a little bit: in bad times having a good time. The space was created to embody that idea. It’s bright and colorful and hopefully communicates the passion that I have.”