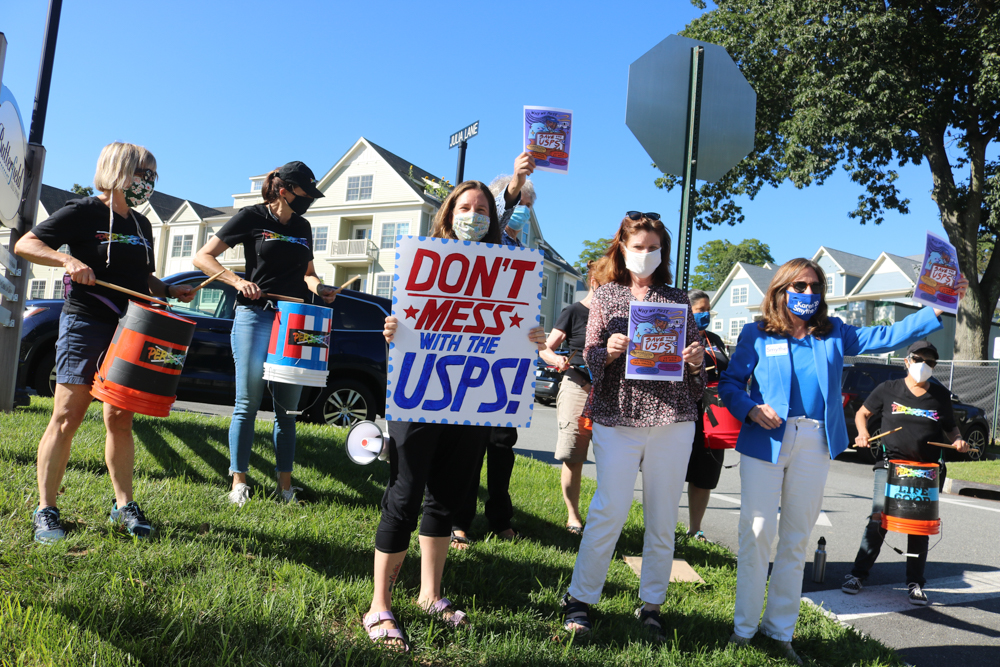 Protestors, including Karen Smythe, the Democratic candidate for the state Senate seat that represents the Highlands (second from right), protested changes to USPS on Thursday (Aug. 20) on Route 9D in Cold Spring near the village post office. (Photo by M. Turton)

Linda Weaver, a Cold Spring resident, said she began noticing delays with her mail in mid-July. Weaver uses the U.S. Postal Service “informed-delivery” service, which allows residents to see their incoming mail. On some days, she said, informed delivery “says it’s coming but it doesn’t come.”

She initially attributed the delays to the pandemic-induced jump in orders from Amazon, which “has so overworked these guys” at the post office. “So, when it first started happening, I didn’t pay attention to it. But then it became a thing. And I thought, ‘I wonder if this has something to do with No. 45 [President Trump].’

“If my mail comes one day or the next day, I’m not going to get nuts over that,” said Weaver, who contracted COVID-19 in March and hopes to vote by mail in the Nov. 3 general election. “But considering that I want a ballot, and I want to vote in this election, I’m deeply concerned with what’s going on.”

Postmaster General Louis DeJoy, who started the job in June and is a donor and friend of President Trump, has been instituting operational changes at the USPS, which faces massive financial losses.

Because the changes are happening as Trump claims that mail-in voting will lead to widespread fraud, and his campaign is suing states over expanded vote-by-mail rules for the November election, DeJoy is facing accusations that he is deliberately slowing the mail.

Some of the changes, spelled out in a memo obtained by The Washington Post, included not allowing carriers to work overtime, even if that meant “mail left behind or on the workroom floor or decks.” DeJoy has also been accused of removing mail-sorting machines and street mailboxes.

“Every piece, every day used to be our motto,” one local carrier who asked not to be identified told The Current. “Not anymore.”

In response to criticism, DeJoy on Tuesday (Aug. 18) said he is suspending his changes “to avoid even the appearance of any impact on election mail.” Post office hours will remain unchanged; no mail-processing facilities will be closed or equipment and collection boxes removed; and overtime will be approved as needed, he said.

Cold Spring’s mail carriers have been reassigned from Garrison to the Mohegan Lake post office “in the interest of service and efficiency,” the U.S. Postal Service said this week.

As of Saturday (Aug. 15), carriers assigned to six routes covering the 10516 ZIP code begin will begin their day in Mohegan Lake, said George Flood, a representative for the postal service, which is overseen by the federal government but funded by postage sales.

“This behind-the-scenes move, which is relatively transparent to the public, is freeing-up much needed space in Garrison to enable us to better handle the increased package volume,” said Flood.

The number of packages handled in Garrison between Aug. 8 and Aug. 14 was 56 percent higher than during the same week in 2019, he said.

Cold Spring’s mail was sorted in Garrison after the post office closed in Foodtown Plaza in January 2014 and was replaced by a trailer. The post office is now in a new space at the Butterfield complex but remains too small for sorting.

Rep. Sean Patrick Maloney, whose district includes the Highlands, was one of 131 House Democrats who called for a bail-out of the USPS in the next pandemic relief legislation. The House version of the bill includes $25 billion for the USPS and $3.6 billion to help states with their elections.

“This pandemic has only highlighted the critical service the USPS provides our communities as more people buy groceries, medication and goods online, and look to conduct important activities — like voting — through the mail,” said Maloney.

President Trump opposes any bail-out, saying USPS should raise its rates instead. On Tuesday, the postal service announced a temporary rate increase on commercial parcels through Dec. 27.

The USPS is expected to handle a record number of mail-in ballots for the November election. An analysis by The New York Times of each state’s rules concluded that as many as 80 million people could vote by mail, double the amount in the 2016 election.

To prevent gatherings that might contribute to the spread of COVID-19 during the June 23 primary in New York, Gov. Andrew Cuomo allowed anyone to vote by mail. As a result, the Dutchess and Putnam County Boards of Elections received thousands of mailed ballots; it took Dutchess more than a week to count them all.

On Thursday (Aug. 20), Cuomo signed three bills into law that will allow voters to request absentee ballots for the general election based on the risk of COVID-19; request them immediately (rather than 30 days before the vote); and allow boards of election to count absentee ballots postmarked up to Election Day and received by Nov. 10, and those received by Nov. 4 with a Board of Elections time stamp but no postmark.

The USPS had told 46 states, including New York, that it may not be able to deliver mail-in ballots by their statutory deadlines.

In a letter dated July 30 addressed to the state Board of Elections, the USPS warned that “certain deadlines for requesting and casting mail-in ballots may be incongruous with the postal service’s delivery standards,” creating a risk that “ballots requested near the deadline under state law will not be returned by mail in time to be counted under your laws.”

(Dutchess and Putnam will also offer early voting in late October, but Putnam plans to have only one polling place, at the Board of Elections in Carmel. Dutchess will have five locations, including Fishkill Town Hall.)

Greg Williams, a Cold Spring resident who said he is “enormously concerned” about slow mail affecting the election, lived in Seattle for 16 years. Washington is one of five states that have all-mail voting.

Ballots there are mailed to registered voters as part of a package that includes descriptions of the candidates and ballot measures, he said. Voters can return ballots by mail or use drop boxes. The system “makes voting a straightforward, painless and rewarding experience,” said Williams.

“You don’t have to do lots of your own research, although, of course that helps; there’s no waiting in line; there’s no having to schedule it around work,” he said. “Why we shouldn’t do that everywhere in the United States, I can’t imagine.”

3 thoughts on “What’s Up with the Mail?”