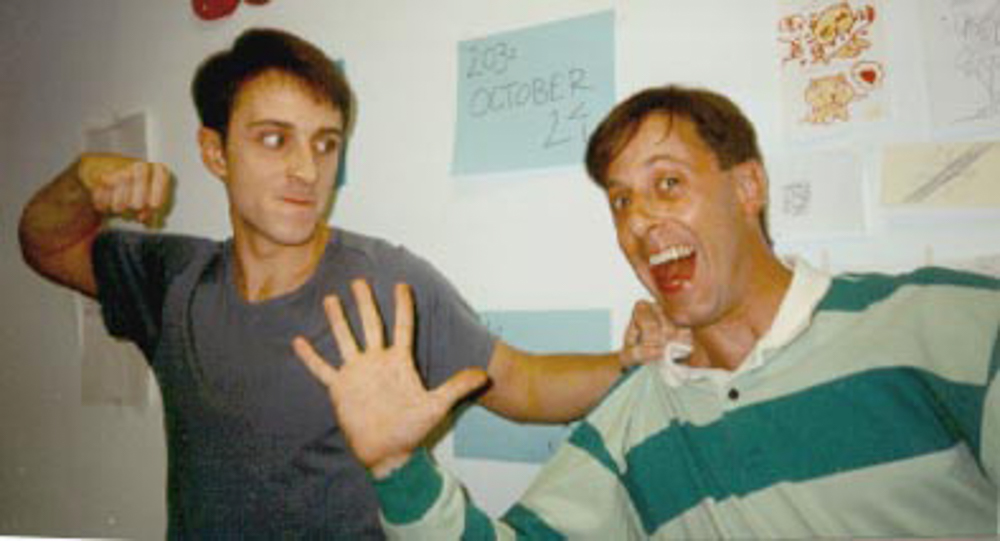 Adam Osterfeld, who lives in Philipstown with his wife and their two sons, is a first-grade teacher at the Manitou School. He spoke with Alison Rooney.

Back in the 1980s, soon after MTV had started, my teachers at the Pratt School of Design in Brooklyn didn’t get what music videos were all about. “How does this selling-the-song thing work?” they’d say. “It’s not commercial.”

Meanwhile, I had friends who kept trying to get me to work with them on music video projects. And I did. While still at Pratt, I worked on the video by The Waitresses [best known for “I Know What Boys Like”]. Looking at it now, it’s corny as heck, but it’s what we thought videos should be back then.

I was creating animations. People would ask what computer I was using and I’d say, “Light boxes and crayons!” I came up with a name for it: xerography, which sounds fancy. It was similar to rotoscoping, which is projecting film that you trace, frame-by-frame. I turned it into animation using photocopies.

After that I went to Nickelodeon — I had friends there — you got jobs then just by showing up! It was the 1980s and 1990s, and it was casual and all by word-of-mouth, like, “You wanna work this week?” I did a lot of work for Viacom; they owned everything: Nickelodeon, MTV, lots more. I was an original designer on [the children’s shows] Blue’s Clues and Wonder Pets, and I art-directed Little Bill.

On Blue’s Clues, the producer would ride in the hallways on one of the little bikes we all used to have, with a bell and a basket, delivering the animations. The place was kooky. The adults would go home at 6 p.m. and the rest of us would stay and play. They did focus groups to figure out how kids were learning, and we made artwork based on that. At the time, I looked kind of like the guy who played Steve, the host. We went out together once on Halloween and a child came running up yelling “Steve!” — only she was pointing to me!

Next I was hired at a company called Broadcast Arts, where I worked on the title sequence for the Madonna movie, Who’s That Girl? It was done on 11-by-17-inch animation cells with greased pencils and paint. The place was part of the wild animation scene that was developing. There were punks on ladders, hanging things, and a live chicken running around because someone was animating one. [Future heavy-metal singer and filmmaker] Rob Zombie was our bike messenger. It was a time when being an artist meant you would cross paths with famous people: Paul Simon, John Goodman, Dr. John. It was fascinating who you would meet if you stayed up late enough.

After Broadcast Arts, I bounced around doing freelance work, lots of commercials and package design, which is where I made my money. I did animation sequences for weird things like an MTV pilot called Art School: Girls of Doom, which was about strange girls who were club rats, as well as assignments like the credits for a Yves Montand performance at Lincoln Center.

I hung out at Todd’s Copy Shop in Soho. It’s where [painter Jean-Michel] Basquiat came to get his copies. Todd and I would stay there all night, cranking tunes, making Xeroxes. I started messing with the Xerox machine to get a different kind of look. It was a moment in time. I was a graphic designer, not someone who drew. I was a typography person who could give things a polish. I was also good at coordinating, putting the crew together, getting the artists in. 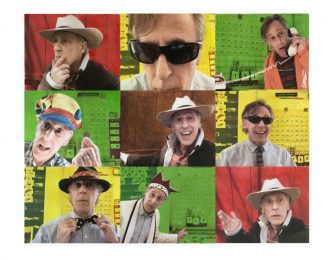 A collage created by Adam Osterfeld of his many moods

I ended up freelancing at most every studio. We’d all wait for jobs to be announced, or to turn up. There were only so many studios and about 500 animators. Pan was where I started — it was in a loft in Dumbo, which was a mess, pretty dangerous. We’d ride our mountain bikes over the Brooklyn Bridge, and they’d lower the key to the street with a fishing rod.

After a while, animation work began being exported to Ireland and South Korea. The mom-and-pop studios didn’t last.

For a while, I was a graphics designer at Oxygen Media, which was owned by Oprah Winfrey. I never met Oprah, but I saw the back of her head once. I worked there until my babies were born. Because of the Family Leave Act, I was able to take six months at home with my child, which was amazing. Everything shifted after that when the Towers fell. Oxygen let go a third of its people. 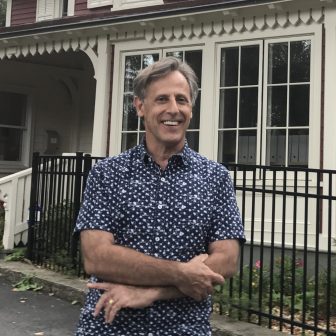 Once I had my own babies, art didn’t have as much importance to me, and I made the career change. The economy hit the skids and I had to reinvent myself anyway. The days without schedules came to an end. At age 48, I went back to school to earn my master’s degree and become an elementary teacher. Now I teach children to read, write and do math, and I love it.

In many ways, Blue’s Clues led me to wanting to become a teacher. The process of learning to speak and read through the cognitive learning models I saw there made a big impression. It taught me how to ask questions instead of giving answers. Also, both of my parents were teachers.

It’s funny that in my youth I was kind of an “edgy” person and now I’m more of a “community” person. In both roles, tapping into what children do has been easy for me — I get how they’re thinking, why they’re thinking it. My wife says I’m like a 2-year-old at times, but I say, “Not 2 — more like 5.”