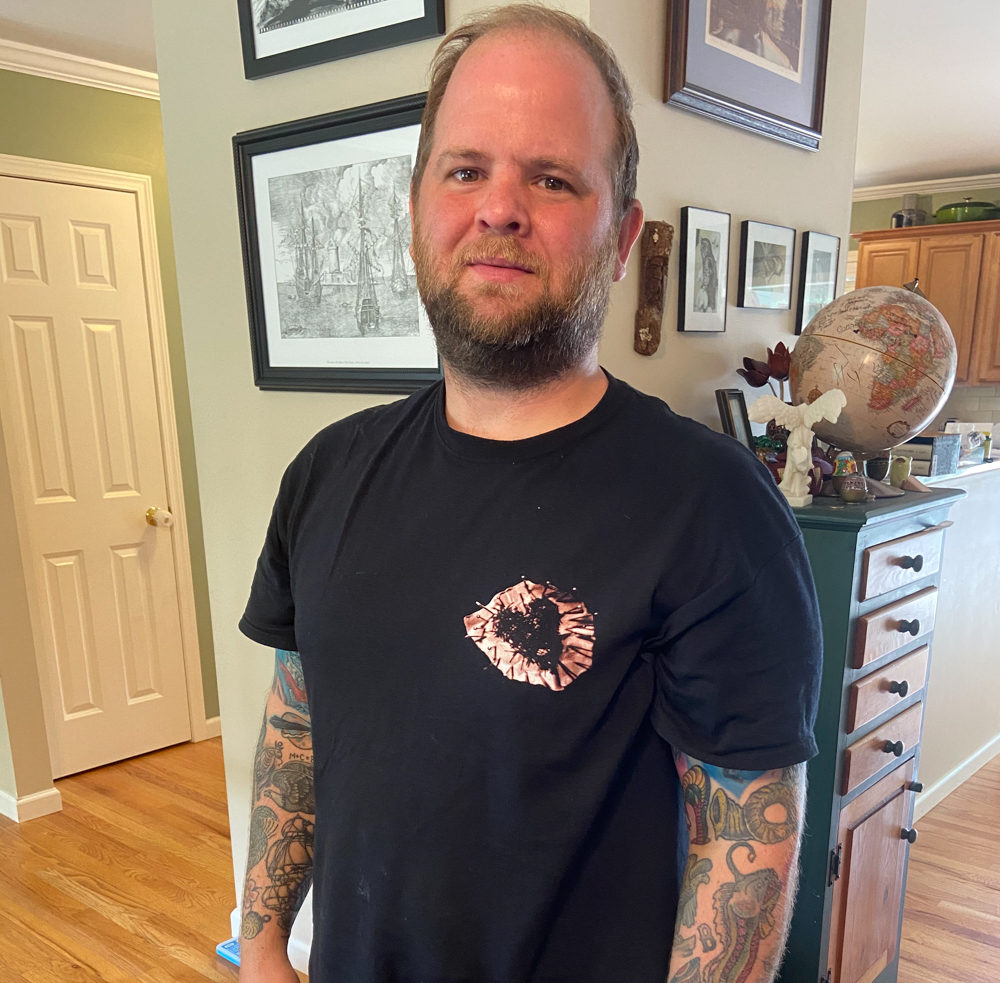 When Mark Darnobid started getting into tattoos, the designs posted on parlor walls and in stylebooks — known in tattoo lingo as “flash” — struck him because of their accessibility and boldness.

“It’s a simple execution of a design, but it has to be readable,” he explains. “It’s done by craftspeople.”

While not interested in becoming a tattoo artist (he is committed to his career as a social studies and special education teacher), he decided to use the basic tools of tattooing — ink pens and black watercolor — “to learn on my own how to dilute the watercolor in order to get different values. Then I started adding other colors to my palette. I had some pointers from people along the way and watched the occasional video, but mostly I bought art books and tried to dissect works of artists I appreciated. I wanted to learn on my own before getting a proper education.”

Initially, Darnobid studied designs by artists from as early as the 1930s who are considered to be early masters, such as Norman Keith Collins, known as “Sailor Jerry.”

“He joined the Navy and was tattooing in Hawaii during World War II,” Darnobid says. “He worked through to the early 1970s. He incorporated lots of Japanese work into his designs.”

Despite occasional forays into acrylics and oils, Darnobid has stuck with ink and watercolors while experimenting with drawing surfaces such as clamshells, or the edges of books. “I like the unpredictability of watercolors, and their portability,” he says.

Darnobid is also inspired by the work of illustrators such as Gustav Dore, William Pogany and Albrecht Dürer. Much of his art is thematic. A rundown on Facebook of drawings for sale during the past holiday season described them as including “something for lovers of Star Wars, sea life, roses, owls, maritime art, history, Lord of the Rings, horror, birds and everything in between.” 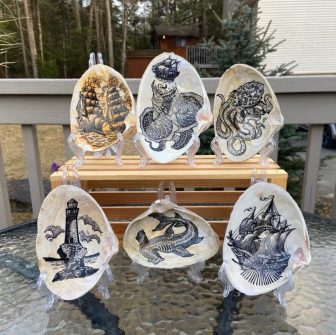 He is drawn to coins, both ancient and classical American designs by Augustus Saint-Gaudens and Adolph Weinman, which “have to provide a bold, recognizable image because they wear so much over time. Every once in a while, I do a painting with a motif I’ve lifted off an ancient coin.”

One of his favorite subjects is travel — particularly any kind of journey with a boat, which “represents the journeys I have been on,” he says. “When the journey is so active, the destination becomes an afterthought.”

Another is marine creatures, because “you don’t have to look to [outer] space for weirdness. What about the octopus? There’s not much of a difference between crypto-zoological creatures that people imagine and real marine life.”

Growing up in Wappingers (he now lives in Sullivan County), Darnobid says he enjoyed drawing but “I never felt I had a real gift for it, and it seemed inaccessible. I liked sci-fi, fantasy and, once I got to high school, comic books, but it wasn’t until I started drawing myself that I developed an appreciation for them. Now I try to draw from a lot of different sources.”

Before he became a teacher, Darnobid spent a few years working with a heavy metal band called Shai Hulud. His experience criss-crossing North America, loading equipment and selling merchandise, has stayed with him. “It guided how I do things,” he says. “I learned you can achieve some level of success as an artist rather than being a commercial success. The success comes from reaching people.”

He has shown his work at galleries in Cold Spring and Beacon (including a two-artist show last year at Catalyst Gallery) and sold it at festivals, but with the shutdown has “found that connecting one-on-one with people is kind of my approach. I’ve found this niche where there aren’t a lot of artists, so I find what I do resonates with people; I have a lot of repeat customers and commissions. Though I do sell some things on Instagram, it’s hard to get a foothold in social media; there are just so many artists.

“I’m very self-conscious about feeling that I’m ‘selling’ all the time,” he says. “Luckily, I’ve never had to rely on it as my main source of income. There are so many artists struggling during this time.”

The pandemic has had an upside for Darnobid. “For me, the past few months have actually been OK,” he says. “I’ve found that working and having a young child [he and his wife, Cassie, have a 3-year-old son, with a daughter due soon] actually helps me manage my time better. Nap time or when my son goes to bed are the only times I have available, but if I didn’t have a 3-year-old I might get more distracted. The situation has helped me maximize my time and efficiency.”