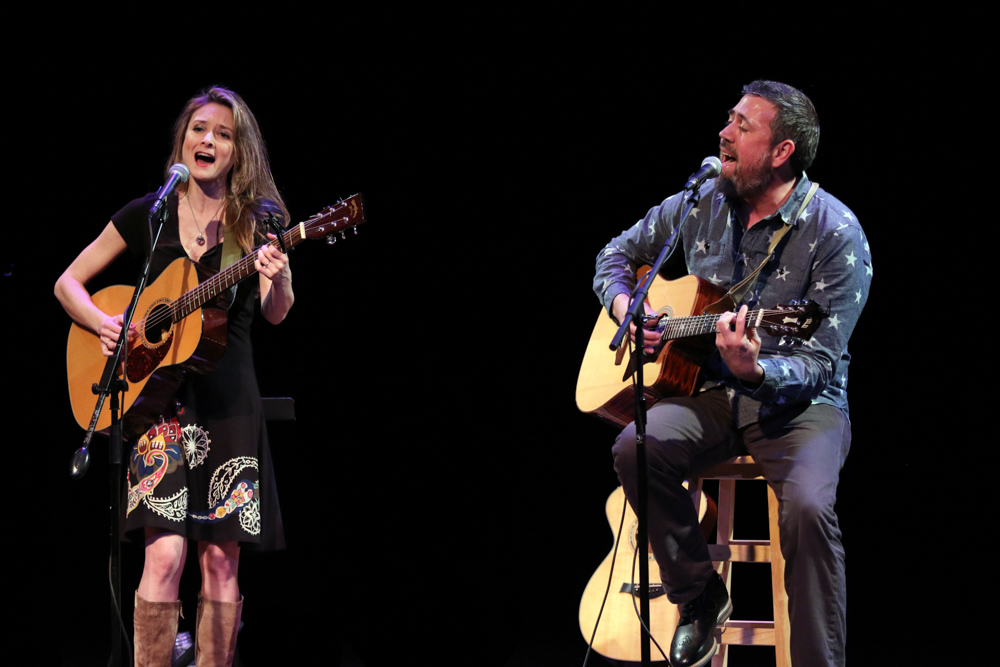 Like many musicians, when venues shuttered because of the pandemic, Annalyse McCoy and Ryan Dunn had to think fast about how to make a living.

The Beacon couple turned to livestreaming, although they faced hurdles: inexperience with the technology, lack of equipment and little funding.

“We were supposed to be playing a gig in New York City the weekend following the shutdown [in March], and we just changed it to livestream right away,” Dunn recalls.

“We started with our iPhone and a ring light and we figured out how to run sound through our computer,” adds McCoy. “We had livestreamed here and there but it never turned out well. When this hit, it was so abrupt, we knew things would be bad. We realized that so much would be lost so quickly.”

They began streaming performances through their Facebook page and later partnered with venues such as Rockwood in Manhattan and The Falcon in Marlboro. And now, they are hosting a monthly online series with the Howland Cultural Center called The Valley Hour that has so far featured songwriters BKSi and Greg Mayo; songwriter Andy Stack with drummer Dave Tedeschi; and songwriter and musical theater composer Jeremy Schonfeld.

Coming up are Cindy Cashdollar, with Stack, on Nov. 7 and Bruce Molsky and The Whispering Tree on Dec. 5.

“We’re really enjoying this,” Dunn says. “People see what we’re doing and say, ‘This must have been a lot of work.’ Yeah, well, what else were we going to do? We’re in a pandemic!”

McCoy says that after the shutdown began, the duo’s first thought was to keep playing, hoping that online performances could be a source of income “in the face of gig after gig after gig being canceled. It was scary for a long time, but it helped keep the chops up, keeping us focused on creating new stuff every week. Normally, when you’re touring and facing a different audience every night, you can play the same songs night after night, but you can’t do this with the same people every Monday.”

A chance encounter on the street with Anda Onesa Lieberman, a board member at the Howland Cultural Center, led to a discussion about how the center “was kind of frozen, not knowing how to proceed and not having any livestreams,” McCoy recalls. With encouragement from Lieberman, the pair began educating themselves on the software people use to broadcast.

After coming up with a name, The Valley Hour — a nod to old radio shows — the couple jettisoned their initial idea for a variety show, with comedians and other non-musical acts. Instead, they decided to “make it what we know,” McCoy says.

They reached out to their fans and raised enough money to hire a production team — technical director Matt Dickey and videographer John Slackman — for at least four shows.

Each show, which usually takes place on Second Saturday, features two musical guests, along with Annalyse & Ryan. McCoy says that following afternoon sound checks on the day of the shows, the musicians “didn’t stop playing. It’s palpable how happy they are to be playing again.”

Before the show, each of the performers sets up in an isolated area. The cameras and other gear are placed in the middle of the Howland Center and rotate to whomever is playing.

“You can feel the love in the room,” Dunn says. “The Howland has been so wonderful and open-minded to work for and try new things out; we’re all learning.”

When Dunn and McCoy moved to Beacon nearly three years ago, they were performing as a house band at the Opry City Stage in Manhattan but decided to make some changes.

“We wanted to become Annalyse & Ryan and do our own thing,” McCoy says. This was after spending years in a band they created called 2/3 Goats —two of the three members were Capricorns — which recorded three albums and toured steadily.

The couple met in 2007, when each was straddling the worlds of songwriting and musical theater (in which they earned college degrees), but eventually they gave up the latter.

“We took a one-year break, then never went back,” Dunn explains. Years later, while preparing for their first European tour, they spotted a Craigslist ad for an apartment in Beacon, a place they had explored many times while hiking. Within four days, they had signed a lease. “We thought the Hudson Valley was a great place to be,” McCoy says.

Their sound comes from their distinct backgrounds. McCoy grew up in the eastern part of Kentucky, near West Virginia, where she felt connected to the “huge storytelling roots in Appalachia, and before that Irish and Scottish. It’s kind of at the forefront of my music and important to me. My family unit focused a lot on social justice, and that influenced my storytelling.”

Dunn is a Jersey boy. “I come at it from more of the groove and song structure,” he says. “We work together using Jersey’s great musical heritage: doo-wop, classic rock, jazz, country. What I love as a songwriter is making connections with people. The story that I tell through song is all about that emotional arc, how it takes you down into sadness, or makes you want to stand up and fight. The chords, the melodies are just as important as the lyrics.”

The Valley Show is available through an on-demand link that provides access for up to seven days after the live broadcast; the shows begin at 8 p.m. Tickets are $12 at howlandculturalcentertix.com. For more info and a schedule, see thevalleyhour.com.