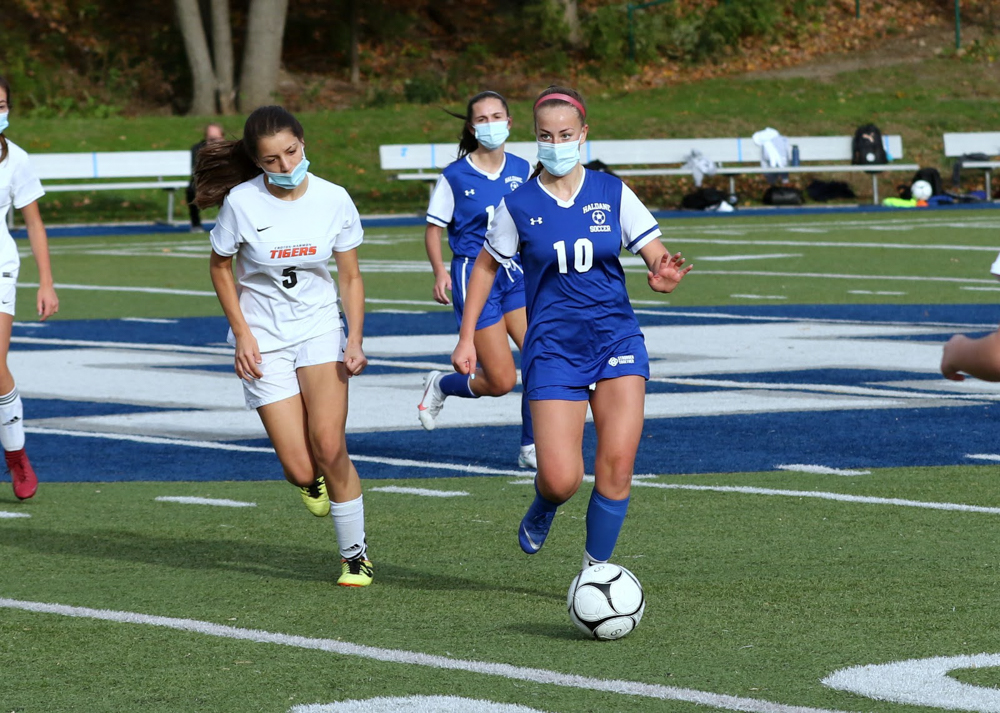 Mazzie Maxwell controls the ball at midfield against Croton-Harmon. (Photo by Scott Warren)

The Blue Devils had their opportunities at Arlington High School on Wednesday (Nov. 4), but the Admirals secured a 4-1 victory. 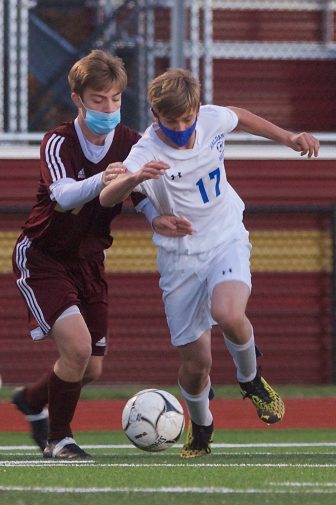 “I’m so proud of the boys, to hang with a big school like that,” said Coach Ahmed Dwidar. “You watch and you learn from mistakes. Remember, we’re a young team with eight freshmen, but we’ll be dangerous in the future.”

Defensively, John Dwyer and Matt Silhavy both had strong games, he said.

A day earlier, the Blue Devils were shut out at North Salem, 3-0. Kiter made six saves in the loss.

The game was played on a grass field and “our team is not used to that,” Dwidar said. “We also have some key injuries, and North Salem is a tough matchup. They have some big players, and we’re a small team. We did have a lot of good opportunities, including a missed penalty kick.”

The Blue Devils are 3-7, but Dwidar said he is not disappointed in the record. “We’re rebuilding,” he said. “We already have one more win than last year, and we’re playing a good style of soccer, improving all the time. We’ve been right there in several of our losses, so I don’t believe our record is indicative of the way the team has played.”

Haldane is scheduled to travel to Poughkeepsie to face Lourdes on Saturday (Nov. 7).

Despite a number of offensive opportunities on Tuesday (Nov. 3) afternoon, Haldane wasn’t able to find the back of the net in a 2-0 loss to visiting Croton-Harmon.

Ruby Poses had 11 saves in goal for the Blue Devils.

“We played a pretty good first half but just couldn’t cash in,” said Coach Steve Schweikhart. “Croton had an energetic start for the second half, and they burned us on a couple of through balls that led to breakaway goals.”

“Bianca Harmancin and Chloe Rowe had strong games on the wings,” he said. “They were dangerous all day. Essie Florke and Ella Ashburn did a solid job defensively; Mazzie Maxwell did a great job in the middle, especially in the first half; and Finola Kiter was a force all afternoon.”

The Blue Devils fell to Croton Harmon, 5-0, last week before sweeping a doubleheader against Valhalla and edging North Salem, 3-2.

Defeating rival North Salem was “a big step toward next year,” said Coach Simon Dudar. “They’re a talented and strong team. We’ve been playing our best tennis lately and gaining confidence in our talent and ability.”

Haldane got singles wins from Mairead O’Hara (8-1) and Caroline Nelson (8-3), and a doubles win from Emilia Osborn and Fiona Shanahan (8-3). Amanda Johanson lost at singles (8-4) and Ellen O’Hara and Betsy McBride fell in doubles play (8-4).

“Our captains, Mairead, Caroline and Amanda, have begun embracing their leadership roles,” Dudar said. “They’ve been critical in pushing us toward competing for a team sectional championship.”

Haldane was scheduled to face Beacon today (Nov. 6), and O’Hara and Nelson will be competing in a regional postseason tournament next week.

Running against North Salem and Croton, the boys’ and girls’ teams each won league titles on Saturday (Oct. 31) at the Section 1, Conference 3 championships in Milton. 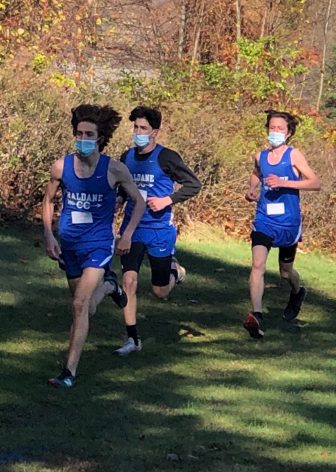 “What a fantastic effort,” said Coach Tom Locascio. “Everyone exceeded expectations. I’m so happy for the boys. The feeling of accomplishment was magnified as a result of earning it through hard work.”

“Caroline and Celia ran their best races of the year,” Locascio said. “They both held off strong individual performances from North Salem and Croton runners.”

The Blue Devils teams will compete in the Section 1 championships on Nov. 14 at Milton.