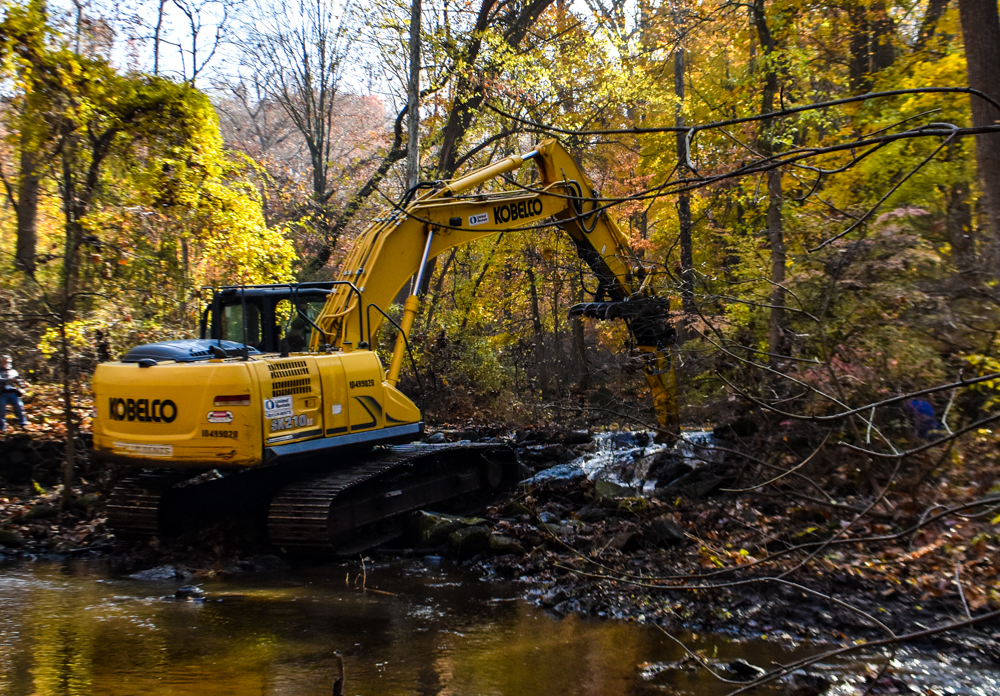 An excavator removes the Furnace Brook dam in Cortlandt earlier this month. (Photo by B. Cronin)

American eel and river herring that return to the Hudson River to spawn next spring are in for a welcome surprise: Access to two ancestral spawning grounds that have been blocked for nearly 300 years.

On Oct. 27, the New York State Department of Conservation (DEC), working with the nonprofit Riverkeeper, removed the Strooks Felt Dam on the Quassaick Creek in Newburgh.

Two weeks later, on Nov. 10, onlookers clapped and cheered as an excavator hammered through a 5-foot-high, 75-foot-wide colonial-era dam on Furnace Brook in Cortlandt’s Oscawana Park.

Over the following few days, the fieldstone from the dam was used to regrade the stream bed, the remnants of a collapsed bridge were removed, and aquatic life was again able to make its way upstream.

Also this month, the DEC awarded $113,800 to the Open Space Institute to study the removal of the Sloan Dam on Arden Brook at the Highlands Country Club, which is part of the Garrison Grist Mill Historic Site that the nonprofit oversees. It is the only dam in Philipstown that is not on private property or owned by the town.

There are about 1,600 dams in the Hudson River Estuary watershed. Riverkeeper and the DEC in 2016 removed a dam in Troy and next year plan to remove a fourth dam upstream from Furnace Brook.

“In order to bring the fish back, we have to bring the habitat back,” said George Jackman, a retired New York City police officer turned aquatic ecologist with Riverkeeper. The fish “are in bad shape. They’re getting hammered out in the ocean with bycatch [being caught unintentionally], so they’ve been overharvested.”

American eel and river herring such as American shad are diadromous fish, which means they can survive in saltwater and freshwater. They swim up the river where they were born in the spring to spawn, then return to the ocean.

Many diadromous species are in peril as a result of a recent development (industrial deep-water fishing for species such as Atlantic herring that indiscriminately scoop up eels and river herring) and a centuries-old one (small dams blocking the tributaries of the Hudson).

Jackman said that the dam removals will be a boon not only to diadromous fish, but freshwater fish and freshwater mussels.

“Freshwater fish are the most imperiled organisms in this country, if not the world,” he said. “And it’s because of dams,” which he noted also change the chemical and thermal properties of the water.

The history of the Furnace Brook dam is unknown, although Jackman said that its fieldstone composition points to the colonial era. The brook was known to Native Americans as Jamawissa Creek, meaning “Place of Small Beaver.”

In 1734 it was named Furnace Brook, perhaps because the dam was built around that time to provide power to a nearby furnace that made cannonballs. “There was no Con Ed back in the day,” he explained. “You wanted power, this was your form of power.” 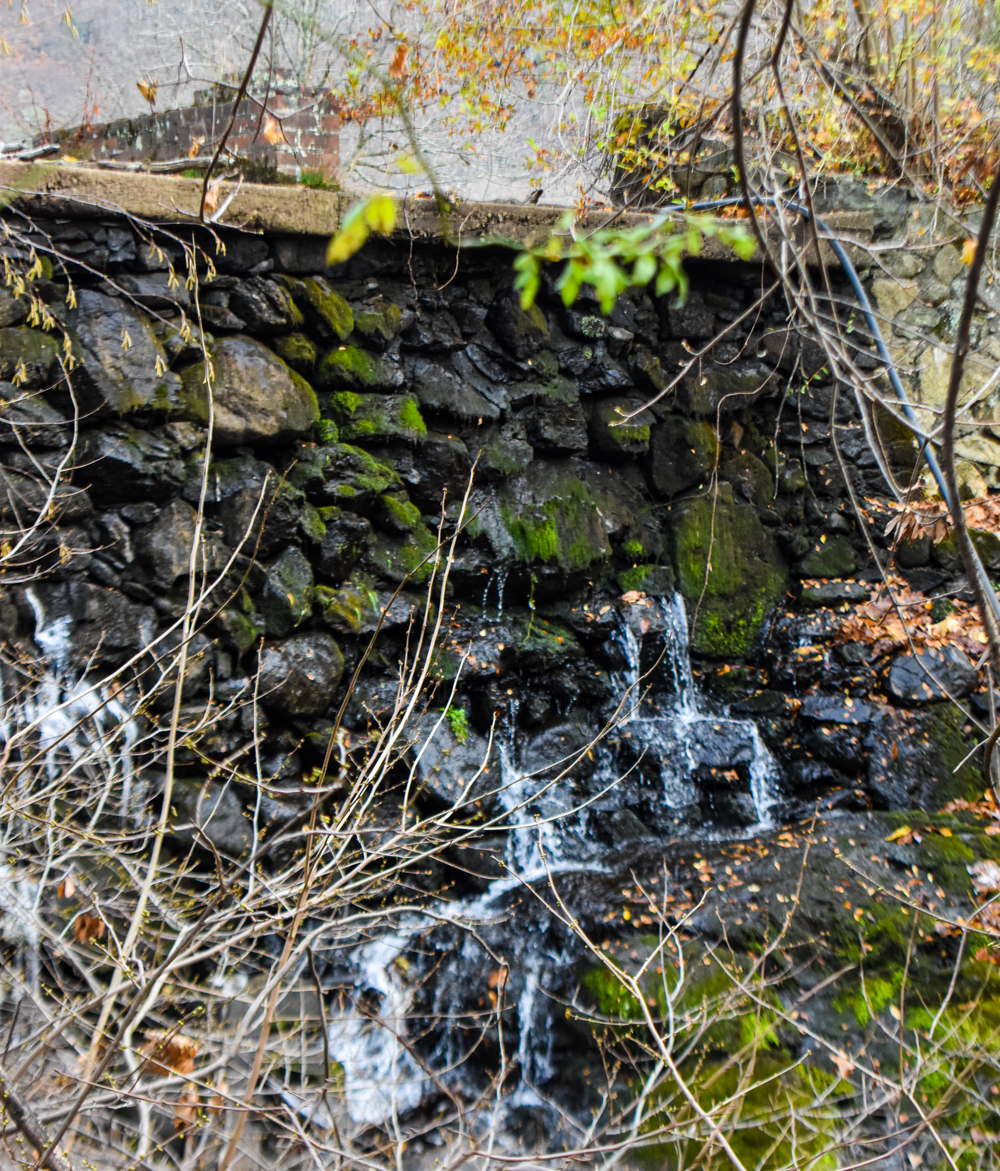 Using a state grant, the Open Space Institute will study whether to remove the Sloan Dam in Garrison, a portion of which is shown here. (Photo by B. Cronin)

While the dams blocking tributaries up and down the Hudson are symbols of colonial industry, Jackman said it’s time for them to go. “This is not a low stone wall in the forest,” he said.

In Garrison, the Sloan Dam on Arden Brook, as well as a succeeding spillway and culvert, are part of the Grist Mill Historic Site, which OSI restored in 2018 while also confirming that the dam was structurally sound. But when Riverkeeper asked the group if it would consider removing the dam to restore the stream, OSI agreed.

Kathy Moser, the chief conservation officer for OSI, and a former deputy commissioner for natural resources with the DEC, is more than familiar with the benefits of the move. But the Sloan Dam project highlights some of the obstacles that must be overcome. Besides the issue of a dam being on private or town property, there’s the fact the state considers the Sloan Dam to be historic — the grist mill is one of the oldest in Putnam County — which would usually make it untouchable. But the state also considers the dam to be damaging to the local environment.

Moser said the study will determine whether there are alternatives to removing the Sloan Dam, such as a “fish ladder” or eel passage. It also will examine the sediment behind the dam for toxins and consider the downstream consequences of removing it.

If the dam is taken out, the pond would give way to natural wetlands and restore about 4,660 feet of stream on Arden Brook. 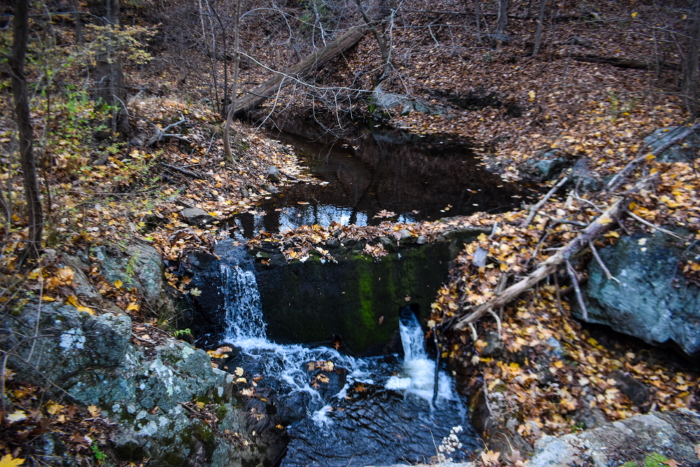 Spillway just downstream of the Sloan Dam in Philipstown (Photo by B. Cronin)

It may seem hard to believe that fish that only live a few years will notice the restoration of spawning grounds that have been off-limits to them for centuries. But when the Wynants Kill dam was removed at the start of the 2016 spawning season, fish were pouring upstream just four days later.

Jackman is optimistic that the same thing will happen at Jamawissa Creek: Last spring, he noticed four herring that had squeezed through the ruins of the collapsed bridge in order to make their way to the Furnace Brook dam, where they hovered, waiting.

One thought on “A Leg Up for River Fish”