Coach Jim Henry said the boys’ team competition was a race to see who would finish second to John Jay, which repeated as county champions. 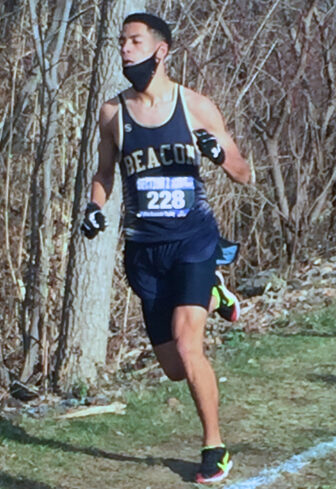 Beacon’s Zach Cader was the first runner to finish the five-kilometer course, in 16:29.4, edging John Jay’s Louis Montano by a tenth of a second. Evan LaBelle was fourth in 16:48, a personal best.

“The highlight of the day was Zach’s amazing finish to catch the John Jay leader at the finish, after trading the lead multiple times throughout the race,” Henry said.

Henry said he was thrilled to get the season in, especially for his seniors, Cader and Schneider, although the season did not include the usual invitational meets, so there were no opportunities to improve on their times at Bear Mountain, Van Cortlandt Park or Bowdoin.

“And yet, throughout the whole season, I felt a sense of purpose amongst my team that indicated that they recognized and appreciated both the opportunity that we were getting and the fragility of the season as a whole,” Henry said. “After coaching a couple of decades, some of the seasons tend to blur into each other, but this one will stand out both for the unique circumstances and for the quality of the kids.

“Every week felt like a bit of a gift,” he added. “I’m grateful to our athletic director and superintendent for believing in and supporting our athletes. It would have been far easier to pull the plug, but so much more would have been lost.”