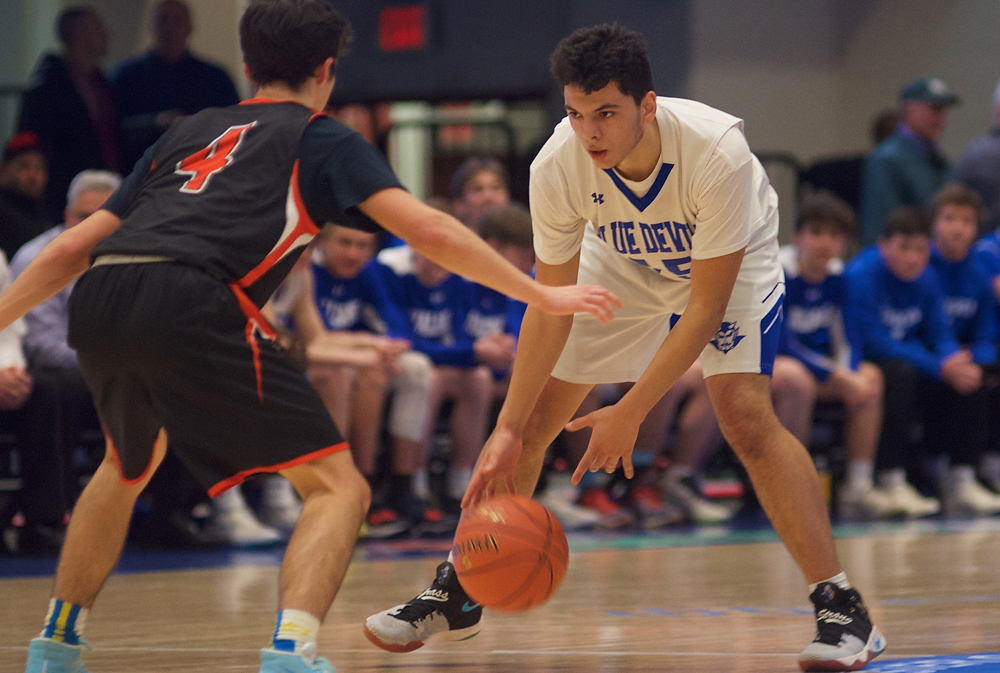 Haldane's Dan Santos in a game last season; winter sports have been given the OK to begin on Feb. 1. (File photo by S. Pearlman)

The roadblocks that have delayed high school winter sports deemed to be “high-risk” because of the COVID-19 pandemic fell like dominoes this week, opening the door for basketball and wrestling to begin at Haldane and Beacon on Monday (Feb. 1).

State officials early this week didn’t give their OK but instead left the decisions to school officials in each district. On Wednesday (Jan. 27), executives from the seven counties in the Hudson Valley issued a joint statement authorizing the sports to begin as of Feb. 1, followed by similar approval from athletic officials in Section 1, which includes schools in Dutchess and Putnam counties.

Low-risk sports such as track and swimming had already received approval. The new plan calls for contact sports such as boys’ and girls’ basketball, wrestling and ice hockey to begin Monday and continue through March 14. Fall sports that were postponed last year, including football and volleyball, would begin March 8 and run through April 25. Spring sports would begin April 19 and continue through June 3.

Both Haldane and Beacon field boys’ and girls’ basketball and indoor track teams, while Beacon has wrestling and Haldane hockey players compete on the Hendrick Hudson squad.

At Haldane, Eric Romanino, the interim athletic director, said the only remaining hurdle is approval from the Putnam County Department of Health, although he was optimistic that would happen.

“Our coaches and athletes are champing at the bit, ready to go,” he said.

Romanino said schedules are being put together as quickly as possible, but that regional playoffs could be a challenge. (The state tournaments for fall and winter sports have already been canceled.)

Ryan McConville, who coaches the Haldane football team, said he was “absolutely happy and super-excited, and so are the other coaches and the athletes. We’re all working to get it off the ground for Feb. 1. The kids are happy to follow any protocols we need to follow if they can play.”

At Beacon, Athletic Director John Giametta called the decision to proceed with winter sports “all good news, and we’re ready to go, but everyone realizes there’s more to it. We need to process all the information. With wrestling, no one knows right now how that could look” because it involves much closer contact between athletes than other sports.

Giametta said that for many student-athletes,the approval to start the season is  “the best news they’ve had since March. When you’re not able to do something you love — I can’t imagine. Sports helped mold me into the person I am. For a huge population of students, it’s a motivator, and as leaders we need to allow them the best possibility to enjoy this great experience.”