With the OK for high-risk winter sports coming early this week, the Haldane High girls’ basketball team is anxious to get back on the court in search of its eighth consecutive championship. 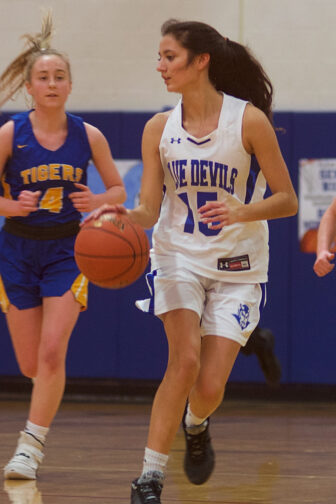 Maddie Chiera is one of two returning starters for Haldane. (File photo by S. Pearlman)

The state tournament for winter sports has been canceled due to the pandemic shutdown, so the Blue Devils will not be able to chase a sectional title. Instead, they will have a chance to win a regional championship, with match-ups arranged to minimize travel.

But that’s not until next month. Coach Jessica Perrone said the immediate challenge for her team will be getting into game shape on short notice.

“So far we’ve been having open gyms twice a month,” she said this week. “Everyone has been distancing, just working on skills.”

The Blue Devils — who last season went 12-10 before losing to Millbrook in the first round of the regional tournament in a gym emptied of spectators — will miss starters Bela Monteleone, Liv Monteleone and Shianne Twoguns, along with Abigail Platt, who all graduated.

Chiera and Siegal will play important roles because “they know the plays, know what we need, so they’ll set the tone,” Perrone said. “We’ll still be a high-intensity team. Even though it looks like a rebuilding year, we can be competitive with other teams in the league,” which includes Putnam Valley, North Salem, Pawling and Croton-Harmon.

Perrone said the approval last month to start the basketball season, and the quick preseason, has been a bit of a surprise, “but the girls are mentally prepared. They’ve been hoping for this; now it’s a matter of getting ready.” Playing in masks will be a challenge, she said. “We may need to have 30-second mask breaks. Girls who played soccer know how hard it can be, but they also know it beats not playing at all.”

Teams in Section 1, which includes Dutchess and Putnam counties, are planning a 12-game schedule. The Blue Devils will play at Beacon today (Feb. 12) and host the Bulldogs on Saturday, followed by home and away games next week against North Salem. Spectators will not be allowed. 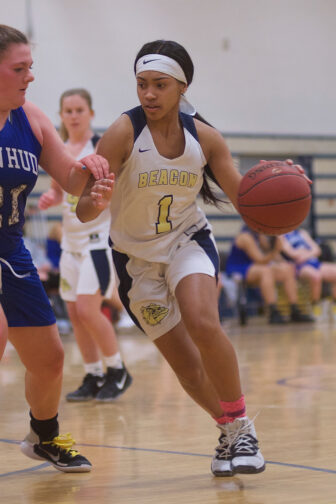 Tianna Adams is one of five returning players for the Bulldogs. (File photo by S. Pearlman)

The Bulldogs finished 9-12 last season, losing to Harrison in the first round of the playoffs. The squad graduated six seniors, including All-League selections Dior Gillins, Grace Affeldt and Analiese Compagnone.

Dahl said seniors Lejdina Gecaj and Dania Gillins are her captains and both “phenomenal student-athletes, at the top of their class, and very coachable. They are great leaders, great players and great kids.”

The Bulldogs, both junior varsity and varsity, will be playing against larger schools, “so we will be battle-tested,” Dahl said. “They’re young and inexperienced, but there’s no lack of tenacity and effort. We will get better as the season goes on.”

She said the season has the potential to be a “day-to-day scheduling nightmare” for teams because of potential cancellations due to quarantines. “But it’s some kind of sense of normalcy for them, and it’s a great way to transition the [younger] girls.”

Beacon’s 12-game schedule is to begin today (Feb. 12), with the Bulldogs hosting Haldane, followed by a visit to Cold Spring on Saturday. Next week the Bulldogs will play Arlington twice (home and away) and host John Jay East Fishkill. Spectators will not be allowed.