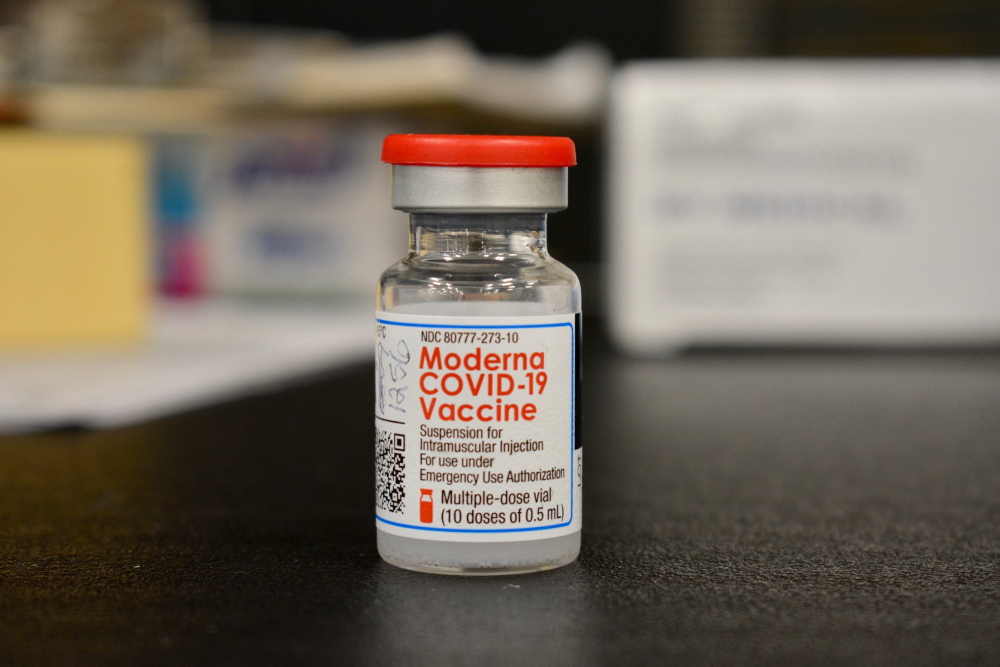 ■  The state is working with local health departments to develop vaccination sites designated for residents 65 and older, and provide transportation to and from those locations and help with paperwork, Cuomo said on Friday (Feb. 26). Counties, which so far have focused on inoculating essential workers, will receive additional Moderna vaccines for those sites starting next week, he said. Locations, dates, times and hours will be announced, said Cuomo. Dutchess spokesperson Colleen Pillus said the county was told of the expanded access and will receive additional doses. “While we weren’t given an amount, we are prepared to distribute whatever we secure,” she said.

■ Counties can now begin vaccinating hotel workers along with other essential employees, Cuomo said on Friday (Feb. 26). Hotels are being used to isolate COVID-19-positive people in some areas of New York, exposing their staff to infections risks, according to the state.

■ Dutchess County received an additional 700 doses to supplement the 1,200 it has been receiving. The extra doses “will help us move the needle a little bit more,” County Executive Marc Molinaro said during his weekly town hall on Feb. 23.

■ The Town of Philipstown announced on Feb. 23 that Haldane High School seniors are volunteering to help elderly residents unable to navigate multiple websites find vaccination appointments. Residents can email their phone number and consent to be contacted by a student to town Councilwoman Judy Farrell at [email protected]

■ Putnam County received on Feb. 22 a shipment of 500 Moderna doses that was delayed from being delivered last week because of winter storms. Of the doses, 200 will be used for people ready for second doses; 100 for those with developmental disabilities; and 200 for essential workers and residents with eligible underlying medical conditions.

■ Assemblyman Jonathan Jacobson, whose district includes Beacon, is calling on the state to establish permanent vaccination sites in Newburgh and Poughkeepsie and to simplify its “haphazard and frustrating signup process” for vaccines. The state held “pop-up” vaccination clinics at the Newburgh Armory and Beulah Baptist Church in Poughkeepsie, but “residents need reliability and consistency,” said Jacobson. He also said the state needs a “user-friendly” system where people can sign up by phone or online and receive an alert when an appointment is available nearby.

■ Dutchess County Executive Marc Molinaro is lobbying the state to open a mass-vaccination site at the former JCPenney space at Poughkeepsie Galleria, which is used by the county health department to administer vaccines. In a letter to Gov. Andrew Cuomo on Feb. 19, Molinaro said the space, at 185,000 square feet, is “ideally situated” to hold large vaccination clinics. “With current vaccine allocation of less than 1,000 doses per week from New York State, the site is currently operating well below its capacity,” he said. 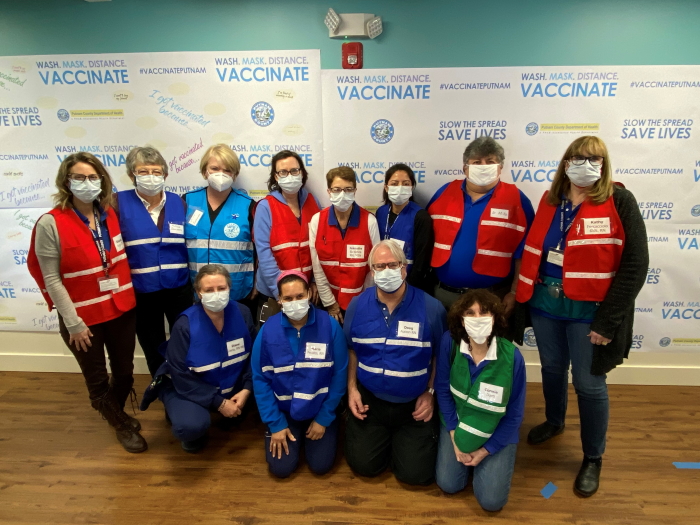 Medical Reserve Corps and Putnam County public health nurses posed with Commissioner of Health Dr. Michael Nesheiwat on Feb. 4 before the doors opened at the first second-dose clinic held in the county, at the Carmel senior center. (Photo by Susan Hoffner / Putnam County)

■ Dutchess County had to cancel about 500 vaccine appointments because a link the county sends to school districts, fire departments, police agencies and other employers was shared on Feb. 16 “with the broader public,” Molinaro said on Feb. 17 during his weekly Facebook town hall. The county, following state guidelines, prioritizes teachers, firefighters, police officers and other essential workers for vaccines, sending links for reserved slots to their employers. “I understand you got an appointment, it was canceled, it’s unnerving, but equally unnerving was the fact that there were 500 people who were already told they were getting an appointment and they couldn’t schedule them. And so those people had their opportunity taken from them,” said Molinaro.

■ Putnam County said on Feb. 17 that a shipment of vaccine doses it expected to receive on Feb. 16 was rerouted back to Kentucky due to weather and a need to keep the doses at the right temperature. The county also said it has yet to receive second doses for people who received their first ones on Jan. 21. The state Department of Health has said the doses will be sent, but has not given an arrival date yet, the county said.

■ Dutchess County rescheduled a vaccination clinic from Feb. 18 to 21 because of “weather-related shipping issues.” Residents with appointments will be notified by phone or email.

■ The Federal Emergency Management Agency will open four more mass-vaccination sites, in Buffalo, Rochester, Albany and Yonkers, that will administer doses to 1,000 people a day beginning the first week of March, Cuomo said on Feb. 15. The first two sites proposed by FEMA were at Medgar Evers College in Brooklyn and York College in Queens. Each site will initially limit eligibility to people in the surrounding communities to reduce disparities in vaccination rates among racial groups.

■ Appointments are booked through April 16 at nine of the 13 state-run vaccination sites, including the one at the Westchester County Center in White Plains, Cuomo said on Feb. 16. About 251,000 people booked appointments on Feb. 14 at the state sites, the largest single-day registration since the first ones opened last month. The state fairgrounds in Syracuse, SUNY Potsdam and SUNY Stony Brook, and the Rochester Dome are the only sites not yet booked through April 16.

■ Residents of any age with certain medical conditions, including cancer, diabetes, heart conditions and pulmonary disease are eligible to book vaccine appointments at the state’s Am I Eligible website starting on Feb. 15. Local health departments will also receive vaccines for those residents, Cuomo said on Feb. 13. People will need to prove their eligibility with a doctor’s letter, medical documents or a signed certification. A full list of conditions can be found at the state Department of Health’s vaccine eligibility webpage.

■ A walk-in vaccination clinic for military veterans who are essential workers or 65 and older was held on Feb. 13 at the VA hospitals at Castle Point in Wappingers Falls and at Montrose. For information, call 845-831-2000, and press “3.”

■ More than 100,000 people received first and second doses in a 24-hour period and about 10 percent of the state’s residents have been given a first dose, Cuomo said on Feb. 11. “We’ve hit a significant milestone in the COVID war,” he said.

■ Nancy Berlinger, a research scholar with the Hastings Institute in Garrison, was interviewed by the New York Times and the Philadelphia Inquirer for articles about queue-jumping, in which people ineligible for vaccines in their home states are traveling to other states to get their shots and others are using money, connections and deception to bypass eligibility guidelines. 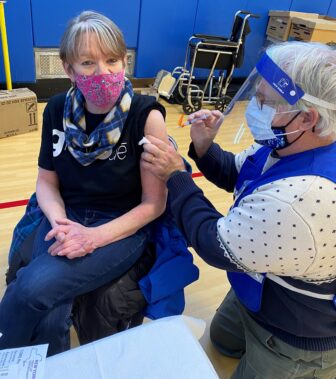 Maureen McCabe, who works in the meat department at Foodtown, is one of the first employees at the grocery to receive a COVID-19 vaccine during a clinic held on Jan. 28 at the Philipstown Recreation Center. (Photo by Susan Hoffner)

■ The Federal Emergency Management Agency will open mass-vaccination sites at Medgar Evers College in Brooklyn and York College in Queens, Cuomo and Jeff Zients, the White House COVID-19 response coordinator, said on Feb. 10. Each site is reserved for residents of those boroughs to improve vaccine access for Black and Latino residents and is expected to give shots to 3,000 people per day. The state is working with FEMA on opening additional mass-vaccination sites focused on “socially vulnerable” residents, said Cuomo.

■ Dutchess County has replaced the online form residents fill out to receive email notifications about upcoming vaccination appointments, a change that requires the roughly 25,000 people currently receiving updates to complete the form again, Molinaro said on Feb. 9. The new Vaccination Information Request Form asks residents to identify their vaccine eligibility category, such as health care or essential worker, or senior 65 and over. Anyone without internet access can call the county’s COVID-19 hotline, 845-486-3555, to get updates about vaccine availability. Seniors can use the number to be added to the Dutchess Office for the Aging’s notification list.

■ On Feb. 9, Cuomo announced that 11 new pop-up vaccination clinics, including ones in Kingston and Spring Valley, are opening this week at community centers, public housing complexes and cultural centers. The community-based sites are part of the state’s strategy to boost access to the vaccine in Black and Latino communities.

■ Cancer, diabetes and high blood pressure are among the health conditions that qualify New York residents to be vaccinated starting on Feb. 15, Cuomo said on Feb. 5.  People with underlying health conditions represent about 92 percent of the state’s nearly 36,000 COVID-19 deaths. The full list includes:

■ Dutchess County is accepting applications from people interested in temporary positions administering COVID-19 vaccines. Applicants must be at least 18 and either medical personnel qualified to give vaccines or employed as a dentist, dental hygienist, emergency medical technician or advanced emergency medical technician, licensed practical nurse, midwife, pharmacist or podiatrist. Students in eligible education programs, such as dentistry and nursing, can also apply. Applications can be downloaded at dutchessny.gov.

■ New York State began vaccinating prisoners 65 and over on Feb. 5, said Melissa DeRosa, secretary to Cuomo. DeRosa said that 1,075 prisoners are eligible. Corrections officers and other prison staff had already been eligible to receive vaccinations.

■ Questions? Dutchess County posts vaccine updates at dutchessny.gov, has a hotline at 845-486-3555 and accepts registration for email updates on vaccine appointments at bit.ly/3olVr23. Putnam County posts info at putnamcountyny.com. New York State has a vaccine hotline at 1-833-697-4829 and a webpage at covid19vaccine.health.ny.gov, which is also where you can find appointments at state-run testing sites. The state also created an email list to provide updates. The federal Centers for Disease Control and Prevention posts updates at cdc.gov.