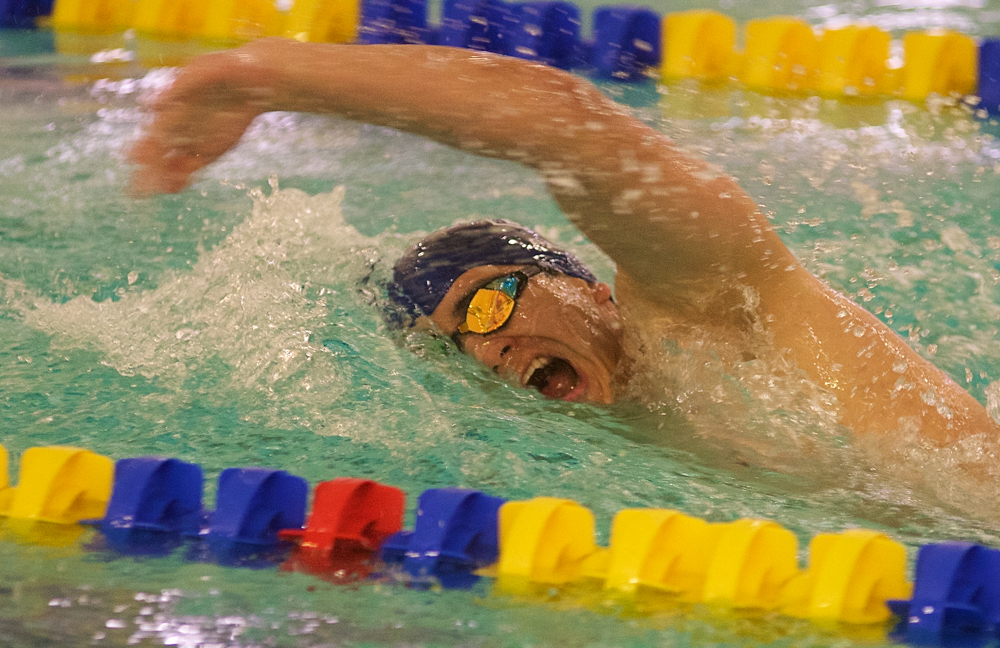 James Patino anchored the 200 and 400 relays for Beacon at this week's Section 1 championships. (Photos by S. Pearlman)

The Beacon High School 200- and 400-meter freestyle relay teams performed well at the regional championships on Tuesday (Feb. 23), according to Coach Larry Collins.

The Bulldogs hosted the meet at their pool. Two other teams competed in-person, while 17 others from Section 1 submitted times from swims at various sites. The meet was scheduled to conclude on Thursday.

The relay team of Lucas Vermeulen, Hunter Ingold, Justin Piciacchio and James Patino finished 14th in the 200 freestyle and 15th in the 400 freestyle.

“That was their best swim of the year in the 200 by six seconds,” noted Collins. “In the 400, they bettered their time by eight seconds. That’s significant improvement. It was a great job by Bottino and Justin, our senior captains. Lucas gave us a fantastic lead off and Hunter did a good job holding the spot.”

Collins said he’s been impressed with the success and progress of the team in this shortened season. “We’ve had some personal and team bests,” he said. “It’s amazing how they got in shape in such a short time.” 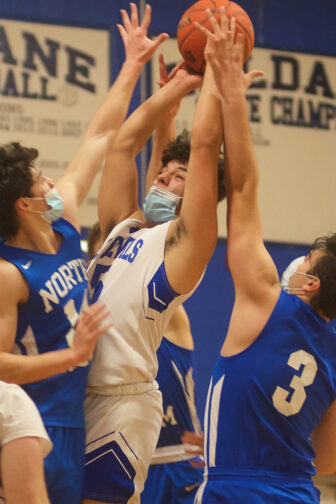 Haldane’s Dan Santos gets a shot up in a crowd Tuesday against North Salem.

“I can’t say I’m surprised, because I knew we had good players and the potential to do it,” Coach Joe Virgadamo said of the undefeated start. “The guys have a will to win, which is big. It’s impressive to see how well we’re playing, sharing the ball, seven games in. Hopefully, we can continue as we start to see better teams.”

Against Beacon, Cervone led the way with 19, Holmbo had 16 and Dan Santos had seven. Virgadamo said Vincenzo Scanga provided “phenomenal defense and rebounding.”

For Beacon, Darien Gillins led the Bulldogs with 20 points and Dillon Kelly had nine. The Bulldogs had a chance to tie the game at the buzzer, but a three-point shot didn’t fall. On Feb. 12, Haldane also narrowly defeated Beacon, 60-57.

The Bulldogs lost another tough game on Tuesday at home, falling to John Jay, 64-53. Gillins led the scoring with 20 points and Kelly added 14. 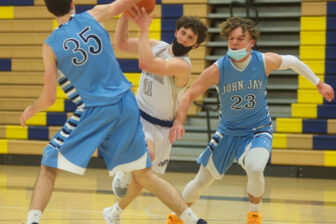 The Blue Devils were scheduled to visit Croton today (Feb. 26) and host Pawling on Saturday before traveling to Putnam Valley on Monday. Beacon was set to host Lourdes today, visit Poughkeepsie on Monday and host Poughkeepsie on Wednesday. Spectators are not allowed, although select games are streamed online.

The Haldane girls’ team picked up its first victory on Saturday (Feb. 20), coming from behind to defeat Peekskill, 48–33.

Peekskill led by four points at halftime and stretched its lead to 10 during the second half, but “we played the right way and stuck with it” for the win, said Haldane Coach Jessica Perrone. Marisa Scanga made two 3-point shots to swing the momentum, she said.

Haldane (1-4) had a tougher game at Croton on Wednesday, losing 61-24. Chiera led the way with nine points and seven rebounds, and Molly Seigel added four points and seven rebounds. Croton is scheduled to visit Cold Spring for a rematch today. Haldane travels to North Salem on Saturday (Feb. 27) and hosts Putnam Valley on Sunday. Specators are not allowed, but select games are streamed online.

It’s been a frustrating winter for track teams, which lost their indoor venues because of pandemic restrictions, then saw repeated snowstorms wipe out any chance to compete outside.

In response, coaches organized a meet at the Hudson Valley Sports Dome in Milton on Saturday (Feb. 20) for athletes from Haldane, Beacon, Hendrick Hudson and Poughkeepsie high schools.

Daniel Phillips and Roy Smith finished 14th and 16th, respectively, in the 1,000, and senior Ben McEwan finished 12th in the 55-meter and 600-meter races. 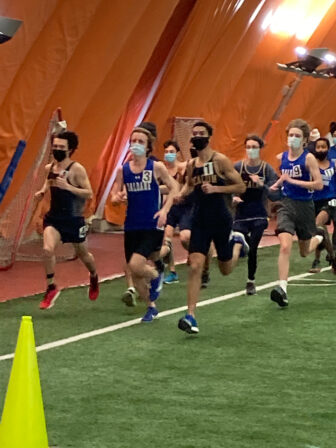 “They’ve been working so hard every day with no competition in sight,” Coach AJ McConville said. “The meet was a last-minute thing — for some it was their first competition; for others, it’s been over a year since they’ve been in a meet. They all did very well.”

With time running out on the season, McConville said some Rockland County coaches devised a plan to compete on Saturday (Feb. 27) at the Palisades Mall underground parking garage, where a 300-meter track has been constructed.

“It’s awesome to see the creativity from our area coaches,” McConville said. “This weekend is our last date for competition and the section has refused to extend our season two weeks as it did in other sports. We have no regional tournament. Milton was our first meet. Hendrick Hudson let us come down and scrimmage [in the Sailors’ mini-dome] and I can’t say enough about their staff for having us.”

McConville said he was happy to “salvage something” for the season, but that there has been no guidance from regional or state officials. “And it’s a shame we have no regional tournament. I don’t know why some sports can have championship events and others can’t. The kids are happy to compete, but confused as to why other sports are going for the next two weeks. It’s been a rough winter.”

Beacon Coach Jim Henry said he also liked the way coaches and schools came together to organize the meets at Milton and the Palisades.

“After losing the New York City Armory indoor track to a vaccination center, and the heavy snow, we were looking for any place to hold a meet,” he said. “Thankfully, the Beacon athletic director and superintendent felt the same way and stepped up to front the money to rent the Milton facility and sponsor the meet. Other area schools, including Haldane, stepped in to share the costs. It’s an excellent example of schools working together to accomplish something that no school could pull off individually.”

At Milton, Beacon’s Sal Migliore won the 600 meters and Zach Cader and Evan LaBelle were first and second in the 1,600 meters. Nathalia Thomas took first in the 55-meter high hurdles.

“The feeling of being able to race was fabulous,” Henry said. “I was pleased with how our athletes raced after endless parking lot workouts.”

Beacon was hoping to compete today in what Henry called a “kind-of” league meet against Hendrick Hudson and Peekskill outdoors at Yorktown, before closing its season at the Palisades Mall.

Dan Gilleo led the boys with a high game of 237 and was named to the All-Section and All-League teams. Will Hockler and Mike Juzfyk also bowled well, said Coach Brian Mahon.

“As a team, we got off to kind of a slow start,” he said. “But our scores got better in the afternoon. Our last game was our best.”

The girls were led by Cadence Heeter, Vanessa Campanelli and Maura Lane.

“Cadence finished at around 800 for the day,” Mahon said. “She’s a first-year bowler but was the best bowler of the day for the team. Vanessa is also new and has improved the most this season. And Maura had a solid day.”