The western Hudson Highlands in Orange County contain six state parks and more than 500 miles of trails, including three long-distance interstate trails that pass through the region (Highlands, Long Path and the Appalachian), but not much in the way of connectivity to link all of these parks and trails together.

It wouldn’t take much to change that, however — only about 20 miles of new trails, according to Peter Karis, director of capital projects and design for the Open Space Institute (OSI).

Although half of the proposed trails could be built on land that is already available because it’s in a state park or privately conserved, OSI projects that it will take at least 10 to 15 years for its vision to be realized.

“The best thing about having a plan like this is that if everyone is like-minded and everyone has the same approach, then we know that we can move swiftly when things become available and opportunities present themselves,” said Eileen Larrabee, a spokesperson for OSI. “It’s something that we’re putting out there for us and our partners to achieve and collaborate on.” 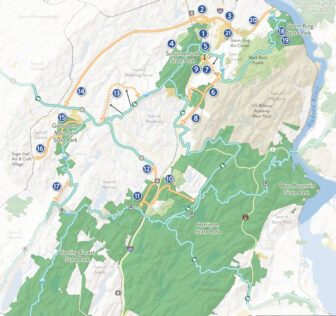 A map created by OSI shows proposed new trails in yellow and existing trails in light blue. The dotted lines are alternative routes. The numbers indicate spots where access would be improved.

Along with new trails, the plan calls for the state’s first “land bridge” to be built over the state thruway near Schunnemunk State Park to allow wildlife to cross and prevent collisions on the highway.

Karis and Larrabee said that the increased trail usage and state park overcrowding seen over the past year following the COVID-19 shutdown demonstrates the need for the project, which will link two Metro-North stations to the trails. Breakneck Ridge in the eastern Highlands owes part of its popularity to the fact that a train stop lies just across the road from the trailhead. The hope is that by adding public transit to trails on the western side of the river, some hikers may be diverted to trails other than Breakneck.

“This will provide more options for people, especially coming from the south,” said Karis. “You can get as great an experience at Schunnemunk as you do at Breakneck.”

Over the past year, OSI’s River to Ridge Trail, which connects downtown New Paltz to the Mohonk Preserve, had more than 200,000 visitors, more than double the number from the previous year.

OSI is also finishing a project on this side of the river: improvements at Fahnestock State Park that began last year and should be done by late spring. They include Big Woods Drive off Route 301 that will provide easier access to trailheads in the northern section of the park and more parking near the Appalachian Trail crossing.

“We’ll be coming back as soon as the snow is gone to put in a lot of the finishing touches,” said Karis.