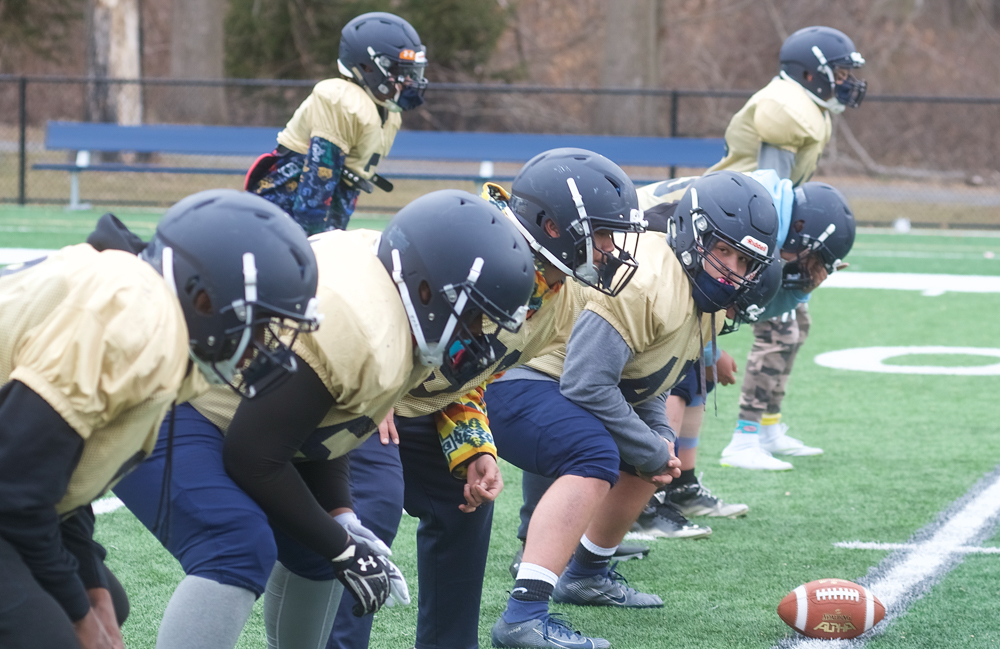 Beacon opens its season on Saturday night under the lights at Brewster.

After delay, teams gear up for spring

After a six-month postponement because of the pandemic shutdown, the Beacon High School football team is poised on Saturday night under the lights at Brewster to open what the state athletic association is calling the “Fall II” season.

It will be the first day of spring.

The football season typically begins in September. Instead, local high school football teams will each play five games in March and April, barring quarantines, followed by a sectional tournament. On Monday (March 15), Section I officials said they will allow attendance by two spectators per player at home and away games for Fall II sports.

Beacon this season will miss two experienced linemen lost to graduation: Santino Negron, who was All-Section, and George Pinkhardt, who was All-League. But everyone else returns. 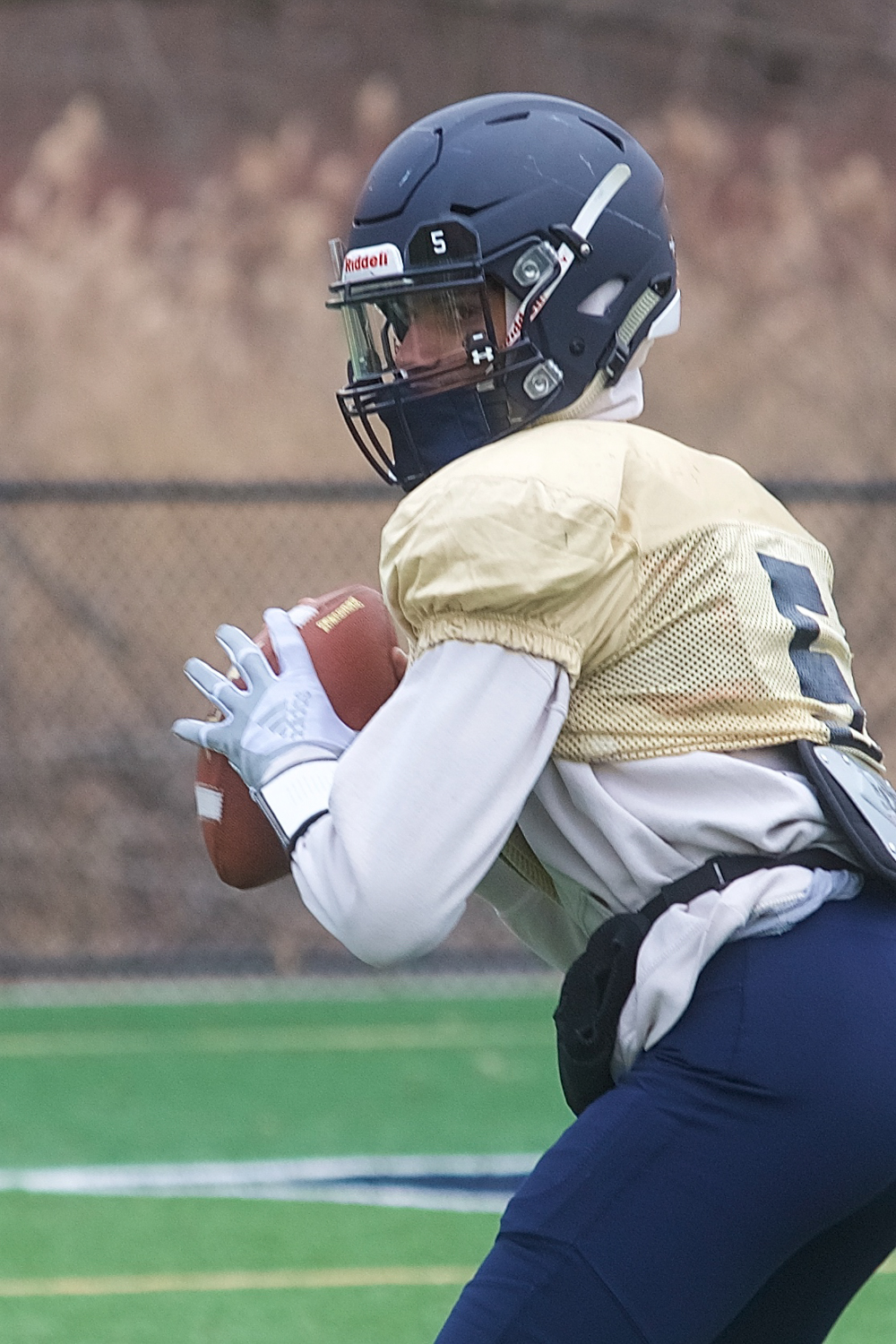 “That allows us to move a lot faster” getting ready for the season, said Coach Jim Phelan. “We’ve also picked up some new faces; our special teams are much improved with the addition of some soccer players.” He said he may also deploy some of the soccer players at the wide receiver position. “These guys can catch the ball.”

Last year the Bulldogs went 2-6. As the No. 16 seed in the playoffs, they lost to John Jay Cross River in the first round.

“With the short season, we need our experienced guys to not only step up their play but their leadership,” Phelan said. “Defensively we’ll be much more athletic and physical.”

The Bulldogs will have their hands full. After Brewster, they will take on Tappan Zee, Mahopac, Somers and Lourdes.

“I always believe the only way to get better is to play the best teams and coaches,” Phelan said. “The boys are fired up; it’s been a long eight months.”

Coach Ryan McConville compared his Blue Devils football team this week to a hungry, caged animal waiting for the gate to be opened.

The six-month wait for the season to start included many moments of doubt, he said.

“Now that it’s reality, we’re going to smile and enjoy ourselves, no matter what happens,” he said. 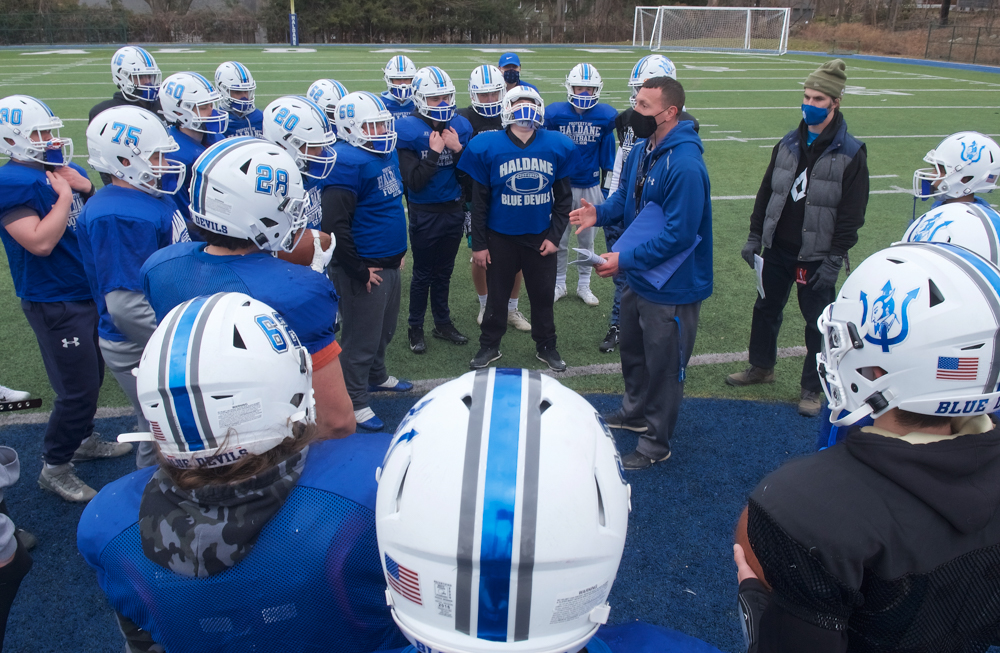 Coach Ryan McConville instructs his team during a practice this week; Haldane will open its season on Saturday at Dobbs Ferry. (Photos by S. Pearlman)

Last year’s team went 2-7, losing to Tuckahoe in the Section 1 championship game. (As the only Class D teams, the teams play each year for the title.)

This year McConville is going all-in on analytics. He said that because of the condensed preseason, his team is focusing on maximum effort and maximum attention to detail, putting three hours of work into half that time. The idea is to avoid burning players out in lengthy practices.

“The goal this season is to compete with some teams we haven’t played in a few years,” he said. “We will play Tuckahoe for the championship, so we’ll build toward that. There might be some early bumps in the road, but we’re focused on our key concepts.” 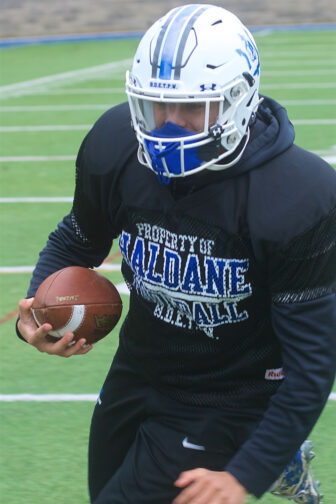 The Blue Devils had no seniors last year, so they return the entire squad. Key players include seniors Dan and Darrin Santos. Dan is an All-Section honorable mention and second-team All-State quarterback who will be a third-year starter. Darrin is an All-League running back and linebacker.

“Those are our playmakers,” McConville said. “We have a good group of running backs and receivers, and I’m looking for them to create some big plays. And, hopefully, some of the success will carry over from the basketball team [which finished 10-1], because we have of a lot of the same guys.”

The Blue Devils are scheduled to open the season on Saturday at Dobbs Ferry, followed by Blind Brook at home on March 27 at noon. They will also host Woodlands and Valhalla, and travel to Rye Neck.