The stockholders of Fishkill Landing created two seats on its governing board and filled them, then sued the board to test the legality of the action.

Three Newburgh residents skated on the Hudson River to Albany, a distance of about 90 miles, in seven hours and five minutes. 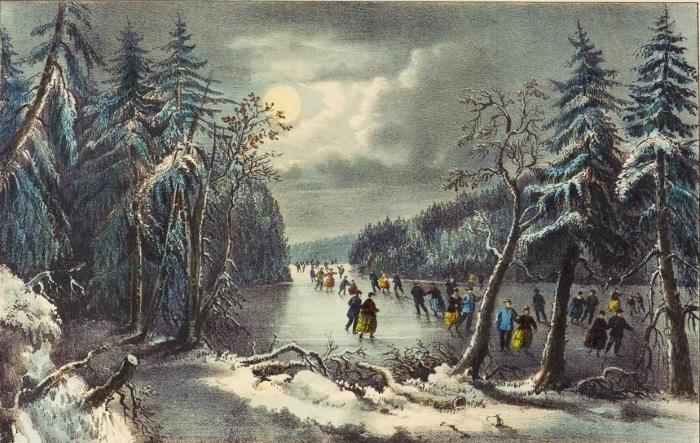 Skating on the river, by Currier & Ives

Sarah Brown and Mary Conelly of Fishkill Landing were each jailed for 30 days for drunk and disorderly conduct.

The Matteawan Review was put up for sale.

Nine employees of the Seamless Clothing Manufacturing Co. quit their jobs after being refused an increase in pay.

A “clergyman at Matteawan” related the story of his 6-year-old son, who had been given a top. When the minister began to say the blessing at dinner, the boy spun his top on the table and said, “Now, pa, see which beats,” prompting a short prayer.

A Los Angeles art gallery held an exhibit of photogravure reproductions of rare images, including one of an “old Dutch house at Matteawan, N.Y.”

William Carroll & Co. in Matteawan placed an ad in the Boston Globe seeking “3 or 4 experienced hot blockers on men’s straw hats” for “steady work for balance of season, fare paid one way.”

Robert Smith, who left Matteawan at age 15 to become a grocer in New York City, died at age 43 of Bright’s disease [of the kidneys] and was returned to Matteawan for burial in his family plot. About the same time, Charles Brown, also a native of Matteawan who left at age 21 for Brooklyn and became a manufacturer of patent models, died at age 61 of heart failure.

Three Civil War veterans from the 56th New York Volunteers — Alexander Bush and John Carnes of Company A and Abraham Van Vlack of Company D — died at Matteawan in the same week.

Debate teams from Newburgh Academy and Beacon High School faced off on the question of closing immigration into the U.S. for two years. Beacon, which took the negative, was declared the winner.

The Rev. Michael Aylward, 61, the pastor at St. Joachim’s church, died in the Leonard Street rectory after a lengthy illness during which he was attended by his brother, the Rev. James Aylward. Michael had been one of the first altar boys at St. Patrick’s Cathedral when it opened in New York City in 1879.

During a court hearing over whether a former employee had stolen his technology, J.J. Gantevoort, owner of the National Oven Co., showed motion pictures of his process and that of his competitor. Gantevoort wanted an injunction to prevent David Hanna from making ovens.

Running on a pledge to reduce taxes, the Republican challenger for mayor, Irving Stafford, easily defeated incumbent Samuel Beskin with 61 percent of 3,300 votes cast. Republicans also won races for commissioner of public works (by 455 votes) and finance (by 21 votes).

The Fishkill Electric Railway, which had been sued by Beacon for $22,000 in unpaid assessments for paving Main Street in the 1920s, offered to settle for $2,000 and 3 percent annually of its gross operating revenues in Beacon.

The estate of Alex Grippo sued the city for $3,000. In 1940, Grippo was one of two men killed by a fire at a cigar store at 156 Main St. The family said the estate deserved compensation because Grippo was a volunteer firefighter, although he was a customer at the store and not on duty.

The state Division of Housing said it would recommend that Beacon be approved to build a 50-unit apartment complex for veterans but Mayor Lewis Bolton said former Army barracks would probably need to be installed at Hammond Park.

Bolton declined to appoint a committee to arrange and pay for a welcome-home celebration for World War II veterans, telling the commander of the American Legion post that it seemed “hypocritical” to spend $1,200 on a party while so many other needs, such as housing, had not been met.

A 13-year-old boy living with his grandparents was reported missing after he did not come home the night before. He said he slept in the ferry house after being scolded for staying out too late.

A 36-year-old woman was charged with assault after shooting a 55-year-old woman in the face to end an argument in front of the Bank Square Tavern. Police said the victim had been in the tavern at about 6 p.m. on a Sunday night when she spotted the other woman walking by. After she rushed outside to confront her, the younger woman pulled a .22 from her purse. The bullet entered the victim’s cheek and lodged in her jawbone, doctors said.

The Beacon Urban Renewal Agency paid the city $29,000 for the annual property taxes on 56 properties it had acquired on Beekman, Chandler and Ferry streets and for an apartment complex at Davies and South avenues.

Rep. John Dow, whose district included Beacon, helped speed up the citizenship application of Donald MacKenzie, 26, so he could return to the city police. The officer, a native of Scotland, was removed from the force after more than a year on the job when the state noted he was not a U.S. citizen.

The City Council was told that it would cost about $14,000 to paint the city’s three firehouses inside and out to “spruce them up” before Beacon hosted the annual Hudson Valley Volunteer Firemen’s Association convention.

Superintendent Robert Musgrove said he planned to form a student advisory committee to address racial and social problems in the district after he closed the high school early following two fights on the same day. The first was a fistfight between a white and Black student that interrupted an assembly on human relations, and the second occurred after someone pulled a fire alarm. “Too many of our young people of differing races do not generally relate well to each other,”Musgrove said.

A 17-year-old Newburgh girl was arrested for assault after she allegedly kicked a police officer in the groin when he tried to break up a fight on Beekman Street.

The school board president told the City Council that a new high school planned for a 65-acre tract on North Road would cost $7.9 million. If approved by voters, the proposal would raise property taxes by 34 percent, he said. The Beacon-Fishkill Area Chamber of Commerce approved a resolution supporting the project, but, notably, only 12 of the 21 directors were present, and the vote was 5-4 with three abstentions.

Lt. Warren Hughes, the acting police chief, was the only one of three applicants for the job to pass the civil service exam.

After defeating Brewster, 84-83, on two free throws by Jerome Williamson with 17 seconds left, the Beacon High School basketball team fell in the second round of the Section I tournament to Woodlands to finish 11-9. 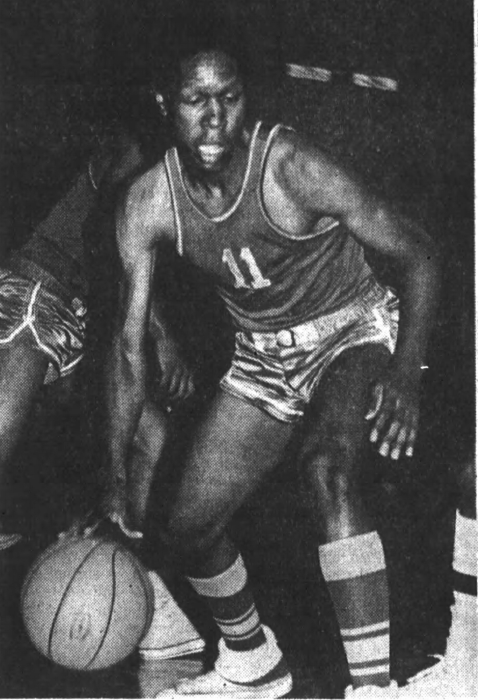 Jerome Williamson made two key free throws for Beacon in a 1971 tournament win over Brewster.

Digger Phelps, the basketball coach at Fordham University, and three other residents of the Jessen Park neighborhood asked the City Council to pressure the developer to fix the muddy roads.

A jury found Martina Banks, 30, guilty of second-degree manslaughter for killing her husband in their Chandler Street home. Banks, a mother of five, testified that the .22-caliber pistol went off accidentally as her husband broke through a basement door she was attempting to nail shut because he threatened to “blow out my brains.” She also was convicted of illegal possession of the gun, which she said she had found in a kitchen drawer.

Two teenagers were arrested on charges they robbed a 21-year-old Glenham man of $12 after he offered them a ride on Fishkill Avenue at 3:45 a.m.

The Rev. Leonel Mitchell, rector at St. Luke’s Episcopal Church, announced he would be leaving to join the theology faculty at the University of Notre Dame.

Five Beacon teenagers were injured when their car struck a guard rail and utility pole and overturned on Route 9D in Fishkill. Although the driver and a passenger were thrown from the vehicle, no one was seriously injured, police said.

The Beacon High School boys’ bowling team set school records of 1,068 pins in a game and 3,038 pins in a series to win the Section I title. John Spear led the team with a 192 average.

City Administrator Joseph Braun said that $200,000 in federal funding had been approved to repair the ferry dock but that the money was being held up by the state. Service was suspended in 1963 with the completion of the Newburgh-Beacon bridge but city officials thought reviving it would attract tourists.

Irvine Bryer Sr. died at age 79. An Army veteran and retired IBM lab technician, he was a Ward 2 supervisor in 1961, a manager of the Beacon Recreation Commission in 1968 and chair of the county Planning Board in 1969.

In a survey of police departments, The Poughkeepsie Journal found that Beacon had one minority and two female officers and that Dutchess County had no minority detectives and no minority or female supervisors.

Following a yearlong cleanup by residents, the state Department of Environmental Conservation dropped 1,350 trout into Fishkill Creek at Beacon.

The 18,000-square-foot Beacon Municipal Building under construction on Route 9D was running at least $400,000 over budget. City officials said the overruns were largely related to a decision to expand the footprint of the project to include not only the Police Department and courts but City Hall. The soil below the construction also was found to be filled with debris and had to be replaced.