A note to readers: This column is about what my children have told me they’ve learned on TikTok, the crazily popular app on which people post short video clips. The reporting is tricky because it requires me to listen closely for the nuances of what they have experienced during conversations at bedtime, in the kitchen or in the car without writing anything down, which would burst the magical moment of spontaneous trust. (They have approved of everything I have written about here; I need my sources to trust me.)

That said, here is a collection of TikTok conversation highlights that many parents may find familiar — I think. You let your kids use TikTok, right?

The ABCs of LGBTQ 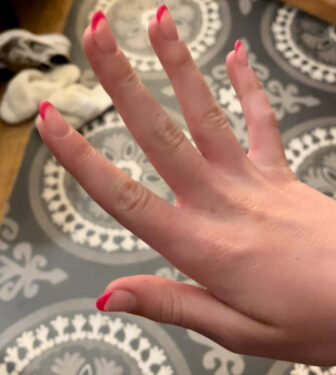 TikTok nail research, with lead to countdown videos, is one highlight in this month’s reporting batch.

My 8-year-old son stopped unwrapping his fruit roll-up to ask me if I knew what LGBTQ meant. He went on to define it for me: Lesbian, Gay, Bisexual, Transgender and Queer or Questioning. We questioned what Questioning meant and discussed it. My 10-year-old daughter suggested there might also be a P in there for Pansexual, but she didn’t know what that meant, but had her ears open for the answer.

Days later, while outside in our driveway shooting hoops, my son and I discussed if girls and boys should play together on the same teams. We wondered if there needed to be girls’ sports and boys’ sports, and if a person who was identified as a boy at birth but transitioned to a girl as a teen should be able to play on a girls’ team.

Later, my son found a report on YouTube on Lusia Harris, who was selected in 1977 as the 137th pick in the NBA by the New Orleans Jazz. Lusia was unable to accept, because she was pregnant at the time (Arghh!).

Olivia Rodrigo has a hit song called “drivers license.” It’s about breakup, longing and mourning. It’s my daughter’s and my current favorite song. The speculation on TikTok is that it is based on her on-screen on-again-off-again boyfriend Joshua Bassett in High School Musical: The Musical: The Series, who is speculated to be an actual ex-boyfriend in real life, but took up with “that blond girl; who always made me doubt; she’s so much older than me; she’s everything I’m insecure about” after (one of) his and Olivia’s supposed breakups.

Speculation is that the “blonde girl” was another singer named Sabrina Carpenter, who felt defensive about the call-out and wrote her own scathing song in response. It is a modern-day Fleetwood Mac lyrical love intrigue.

Creating challenges is trending on YouTube. Over on TikTok, people are posting “behind-the-scenes” videos. It started with the “5 a.m. Challenge” in which kids wake up at 5 a.m. instead of 7 a.m. or 8 a.m. (I wondered if my daughter would become bored in those dark, solitary hours before dawn and, sure enough, this challenge only lasted for three days. The wakeups got later.)

The “Stay in the Tent for 48 Hours Challenge” was the highlight of our pandemic spring break. (Who’s kidding whom? We never go anywhere anyway for spring break.) The neighborhood children pooled together tents from their attics and sheds and stayed in them during a 40-degree night — it was the night I got my vaccine at the former JCPenney in Poughkeepsie.

The kids lived on Lunchables and made mad dashes inside for warm garlic pasta. Every blanket and couch pillow was brought outside, because we aren’t campers and don’t have sleeping bags. But thanks to social media, our kids were inspired to take themselves camping in the backyard — and they survived.

My daughter has always loved doing her nails. We used to do them at night together. Now, thanks to TikTok, she knows about gel versus powder acrylic nails. A desire to get her nails done professionally under the blue light overcame her, and she begged for paid cleaning jobs around the house to earn enough money to pay for these. For a while, I had a very clean house!

On the way to the nail salon, she asked several times: “How long until we get there?” As I discovered later, it’s a thing to publish videos on TikTok counting down until you get your nails done. As we hunted for a salon on a Sunday near Beacon (difficult), we discussed what happened at the spa salon in Atlanta and what the solution might be for Asian and Hispanic women who work in nail salons and maybe aren’t getting paid very well and maybe don’t get to keep those tips.

As we Googled a New York Times feature story about nail salons from a few years ago, and the reactions to that article, we pondered opening our own salon and paying everyone at least $15 per hour plus tips.

This is how dreams are made. You never know what is going to catch.