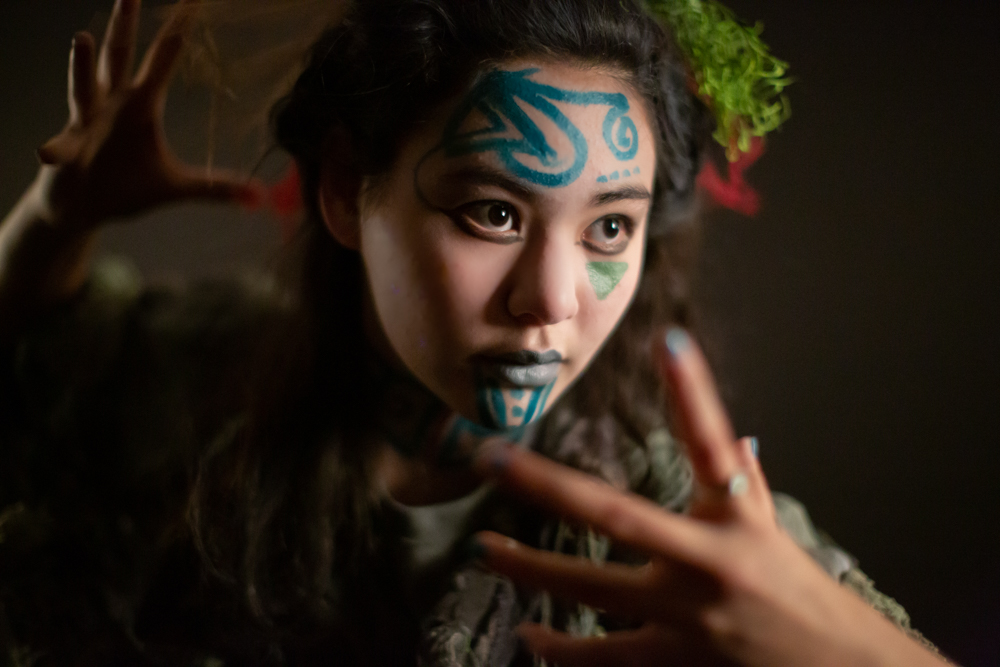 Maya Gelber in "The Greek Trilogy," which will be performed at Haldane High School next week (Photo by Jim Mechalakos)

The natural rhythms of the school year are in disarray this academic year, and the traditional timings of high school drama and musical productions are as much a casualty of the pandemic as team sports.

Usually, like clockwork, Beacon High School presents a musical in the fall and spring; Haldane High School has a drama around Thanksgiving and a musical in March; and James O’Neill High School in Highland Falls, which many Garrison students attend, has the same schedule plus a gala.

Not this year. A tangle of hybrid, all-virtual and in-school learning, as well as an abundance of snow, wreaked havoc on rehearsals.

But, in the grand tradition of the stage, and the typical upbeat energy of theater kids — the shows will be going on.

Here’s an update on each school’s plans for the spring.

At Haldane, rehearsals for the spring production of The Greek Trilogy have been a hybrid of in-person and virtual; the performances will be in-person for limited audiences and also filmed and shown online.

Martha Mechalakos, who directs Haldane Drama, says she decided early in the school year that staging the usual drama and musical was going to be out of reach for 2020-21, hampered by the inability to congregate in person as well as frequent quarantines that affected the parent volunteers who usually build sets, paint, do electrical work and make costumes. 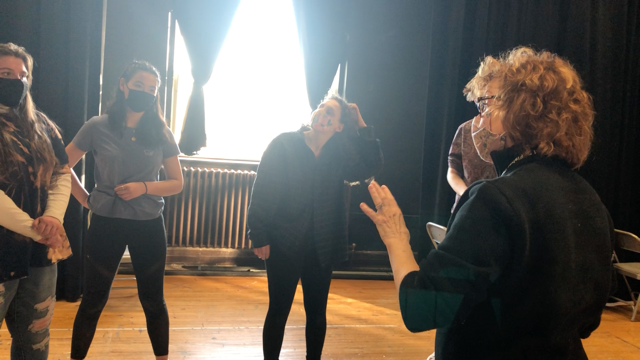 Martha Meckalakos works with the Haldane actors during a rehearsal. (Photo by Jim Mechalakos)

She opted instead for a spring play, and then, to facilitate small groups, broke that into three plays: Helen and The Trojan Women, by Ellen McLaughlin, and Eurydice, by Sarah Ruhl, each derived from Greek myths and stories, all presented from women’s perspectives. “I felt when I picked the three I could do a kind of one-step solution,” she says.

Rehearsals began in January, largely in-person, one play at a time. “I’ve felt we shouldn’t build or paint,” she says. “We just needed a location, or locations, and outdoors ones are easy.” That also allowed for distancing, because she wanted the students to perform unmasked. “We can’t have actors cut off two-thirds of their expressiveness,” she says.

Plans are changing fast. Initially the plan was to record the performances, then they were OK’d for a livestream, and now for a small audience. They will still be filmed and posted online, she says.

“When Broadway shows were shutting down a year ago, I didn’t think we would still be going through this,” Mechalakos says. “I feel for them. My understanding is that across the country this is the way it is. There’s lots of push for athletics, lots of, ‘We have to get them back to sports’ — but what about theater?

“We’re trying to move forward, to give them all a performance opportunity, and some kind of hope, though it’s killing me that we’re not doing a musical this year,” she says. “Still, the kids are grateful. We were rehearsing a few weeks ago when a student told me, ‘I’m just so glad to be here.’”

The Greek Trilogy plays will be performed in rotation from Thursday (April 22) through Sunday (April 25). In-person tickets are limited to 75 for each performance; masks and reservations are required. Tickets are $12, or $5 for students and free for senior citizens at bit.ly/greek-trilogy.

While the Beacon Players’ performances of Rent will take place at 975-seat Seeger Theater at the school, with full sets and lighting, only 200 people will be allowed to watch each of six performances under state pandemic guidelines.

Based loosely on Puccini’s La Boheme, Rent follows a group of impoverished artists and musicians struggling to survive and create in New York’s Lower East Side, under the shadow of AIDS. It was the 1996 winner of the Tony Award for Best Musical and the Pulitzer Prize for drama. The students will present a “school version” that removes some language and one song (“Contact”). 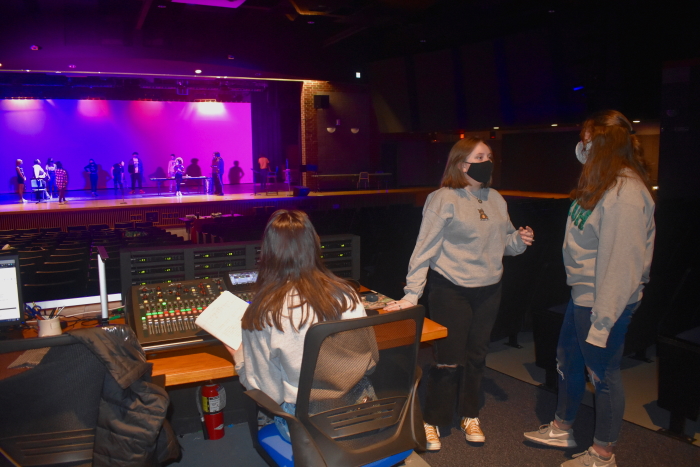 The tech crew sets the lighting for Rent. (Photo by Ila Harvey)

Anthony Scarrone, the director and adviser of Beacon Players, the high school’s drama and theater arts organization, says that most rehearsals and design meetings, which began in February, have taken place in person, with masks and social distancing. He said the set is being built following the same guidelines.

Scarrone notes that “singing without masks is permitted with a 12-foot distance. We opted to use clear masks as an additional precaution.”

The director described the actors’ morale as “great. Kids are excited to have had the opportunity to perform. Theater and the arts is a wonderful release for so many high schoolers. Having a place to go, to interact with their peers, is so critical. We crafted our season to provide some sense of normalcy within the structure of precaution and safety.” 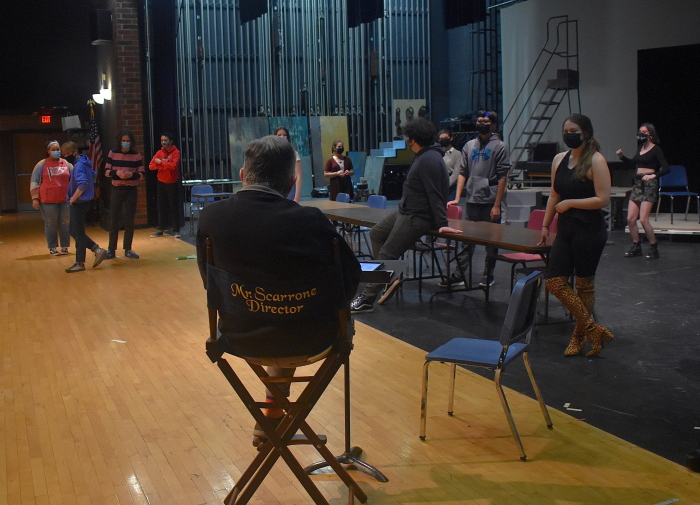 The Beacon Players this year also launched an art and set design apprentice program for eighth-graders that is designed, Scarrone says, to “provide some sense of normalcy for the middle school kids who had nothing this year regarding their drama programs, as well as giving them a head start on high school.”

Rent will be performed by two alternating casts on May 14, 15, 16, 22 and 23. Tickets are available at beaconplayers.com.

Natalie Arneson, the Putnam Valley resident who directs the O’Neill drama program, says getting word in early September that the school would not be opening until November was the kind of hurdle she could jump over.

She proposed to the administration that her students could do an all-virtual fall play. They agreed, and she licensed Clue, conceding, that “it was nobody’s first choice, but it was that or nothing, and the kids and parents were grateful to have this outlet, particularly as they were still on remote.”

Usually O’Neill presents a spring musical and follows it with an end-of-year gala. For 2021, they swapped them. “We did the gala first, and streamed it live with technical help from alumni,” Arneson says. 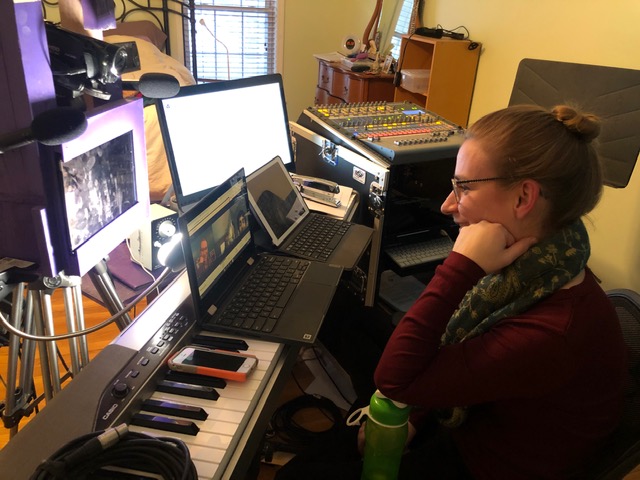 Before the pandemic shutdown began a year ago, Arneson had planned on mounting Crazy for You as the spring musical. “We had such big plans — it’s a tap musical, and we were preparing to bring in Broadway tappers for workshops, and fundraising for this lavish, expensive grand plan.”

With that off the table, Arneson downsized for the spring to a musical adaptation of Little Women, which, she notes, “is one of the few musicals available now for livestreaming with remote rights. It’s not a big show; there are no big dance numbers, so it lends itself well for a concert.”

Believing that the actors would not be able to perform for a live audience, Arneson says she developed three plans: an outdoor concert, with audience and actors spaced out but no movement on stage, filmed for online; a performance filmed at Trophy Point at West Point; or filmed remotely and edited.

Although Arneson has scheduled Trophy Point for May 27, 28 and 29, her current plan is to film the show on the O’Neill stage as soon as feasible. That way, she says, if an actor tests positive or is required to quarantine in the week leading up to our show, “we at least have something to stream. Things will likely be in the air for a while still.”

The school board on Tuesday (April 13) gave the drama club the OK to begin in-person rehearsals with weekly testing.

Despite the restrictions, things have been going well with online auditions and rehearsals, Arneson says. “There have been a few students who said, ‘I’m not up for the virtual experience, I’m overloaded with online,’ but for the most part they are doing whatever it takes.

“There are such hardcore drama kids — they just have to have that outlet,” she says. “And I was determined these seniors would get their show. There’s clear guidance from the state for sports, but not for theater or singing — it’s frustrating. I know what it would have meant to me to lose an entire year of high school theater — I would have been devastated. There’s no way I’m going to let this happen.”

Wanting to give her students “something extra special,” Arneson arranged for a virtual meeting with Mindi Dickstein, who wrote the lyrics for Little Women, and Allan Knee, who wrote the book. “We were delighted and inspired, and so grateful to them,” Arneson says.

For updates on the production, see instagram.com/oneilldrama.

One thought on “The Shows Will Go On!”