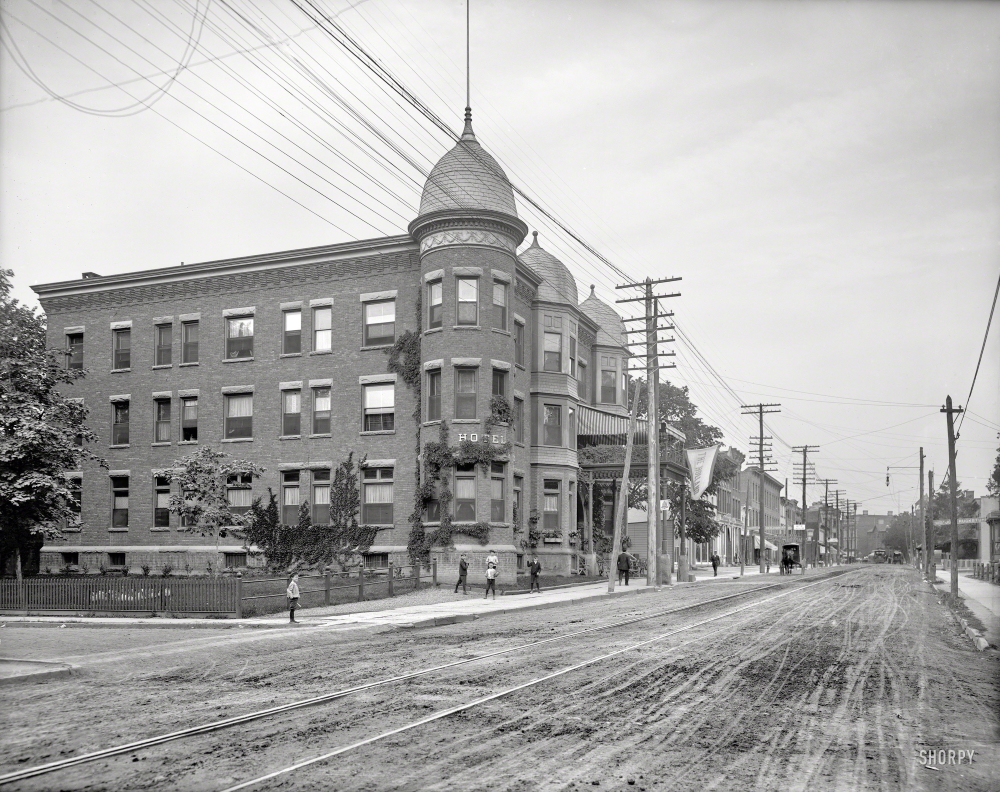 In 1921, Katherine Gordon, the owner of the Holland Hotel, sued to break a lease with John Hyatt. The hotel stood on the site of the current DMV. (Shorpy.com)

The Rev. Father Farrel of Matteawan was granted a vacation by his parish, which he will spend in England for the benefit of his health.

The Dutchess and Columbia Railroad Co. began making alterations at Dutchess Junction in anticipation of it becoming the terminus of the line rather than Fishkill Landing.

A man named Farmer was arrested in Newburgh for “preaching on the street on something besides a religious topic.”

An inmate at the Matteawan State Hospital expressed no remorse for striking and fatally injuring another inmate, John Curtis. “I know Curtis is dead, and I’m not sorry,” said William Kearney, during an inquest. An attendant testified that he had been passing the mess room when he saw Curtis turn and strike Kearney, who pushed Curtis over a chair. A jury found Kearney “irresponsible,” or not guilty. Both men were said to be “quiet patients” who did not require restraints.

John Avenall, who had been confined to the Matteawan hospital as a teenager, was deported to his native France. He had come to the U.S. alone at age 15 aboard a steamer but was arrested during the voyage for theft. After spending nearly three years at the Elmira Reformatory, he was ruled insane and sent to Matteawan. 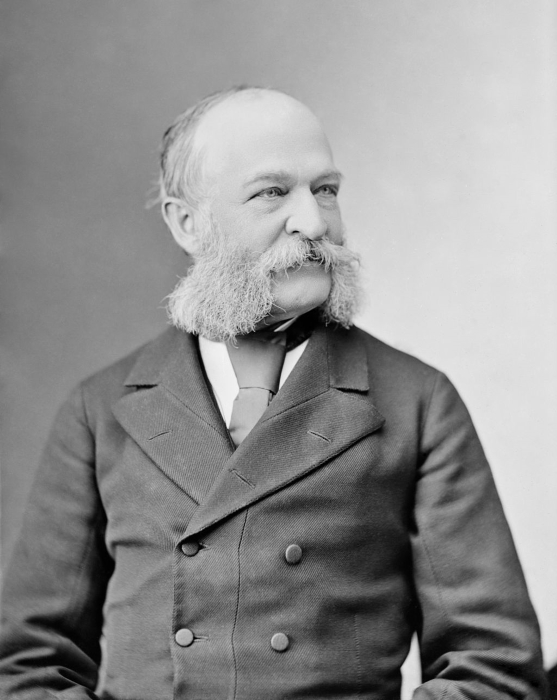 In 1896, New York Gov. Levi Morton commuted the sentence of a man who had escaped from the Matteawan State Hospital.

To the surprise of many, Gov. Levi Morton commuted the sentence of Patrick McGuire, who had escaped the previous fall from the Matteawan hospital with train robber Oliver Curtis Perry. Although McGuire testified against a guard who aided the escape, the district attorney refused to recommend him for leniency, calling him a scoundrel.

A Fishkill Landing girl named Mamie Higgs, who was bitten six times by a snake that wrapped itself around her leg, was expected to survive after nearly a week of convulsions, chest pain and fever.

David Corwin, who was formerly employed at a railroad office in Matteawan, confessed in Boston to setting fire to the Hub Blank Book and Stationary Co., where he was treasurer. Corwin, 37, told police that “a sudden and unaccountable impulse came over him.” A native of Newburgh, he had a troubled life there: both his parents committed suicide and his father-in-law was murdered by a “bridge gang.” Matteawan authorities suspect Corwin may have set several suspicious fires that occurred in the village when he lived there.

Cortland Harris, 20, of Matteawan, who managed a minstrel troupe, was married in Cold Spring to Minnie Campen, 19, of Washington, D.C., the daughter of a wealthy lumber dealer. They had met when Harris was an advance agent for a circus coming to a western New York town where Campen was visiting relatives. They began a correspondence, but when her father discovered the letters, he angrily confronted his daughter. Two days later, she appeared in Matteawan with a plan to be married but her father arrived the next day to take her home. Harris later received a telegram from Campen instructing him to meet her in Cold Spring, where they were married by the justice of the peace and wrote her father to ask for his forgiveness.

The fugitive Jeannette Hall, who escaped in January from the custody of the Matteawan police chief after being charged with bigamy, was arrested in Newburgh. She admitted to having four husbands but said two were dead.

Darby McGowan and Jerry Readle, both of New York City, met at the Opera House at Fishkill Landing at midnight for a clandestine boxing match with 2-ounce gloves. About 400 tickets were sold at $3 each. The fight lasted until the sixth round, when the police showed up.

A speaker at a meeting of the Hudson River chapter of the Knights Templar called for the creation of East Newburgh, which would include Fishkill Landing and Matteawan.

George Sheffield, who was taken from the train to Highland Hospital apparently suffering from alcohol poisoning, was ordered to leave town. He told officials he was a cattleman from Galveston, Texas, and that two of his companions had died in Albany from the same liquor that laid him out. However, when Beacon police officers visited the hospital, they recognized “Sheffield” as William Lunn Foshey, a Newburgh conman who had been arrested two years earlier for impersonating a West Point soldier. Foshey admitted faking his illness and was given five minutes to get out of town.

City and county officials called on Dutchess County judges to give jail time instead of fines to saloon owners who flouted state prohibition laws that allowed them to serve drinks that contained no more than 1½ percent alcohol. At the same time, an inspection by revenue agents of the Union Hotel, Savage Hotel and Ye Olde Fishkill Inn in Beacon failed to find any dry-law violations.

Plans were made to rebuild the convent of the Presentation Nuns on the banks of the Hudson, which had burned down the year before. The nuns had lived in the convent during the summer for 30 years.

Randolph Adams, a member of the Beacon Engine Co., suffered fatal injuries when his wishbone suspension broke and his car crashed into a ditch on Fishkill-Beacon Road. In a similar accident, the suspension broke on a car carrying a group of Poughkeepsie residents home from Beacon, causing one of the wheels to roll away and the vehicle to narrowly miss a tree.

The S.W. Johnson Five of Wappingers Falls defeated the Trinity Five of Beacon, 27-26, before “mobs of fans” who “kept yelling throughout the entire contest,” according to the Poughkeepsie Eagle-News. The paper said the game was rough, calling it an “imitation of football played indoors.”

There was a report that Beaconside, the 26-acre Burnham estate, had been sold to the owner of an Orange County military academy.

A judge awarded a disputed hound dog to Allison Ten Eyck, who said it was her Jack. The Nuccitelli family, however, claimed it was their Bounce. The hound wagged his tail when called either name or by either master.

A Yonkers man told police that while he was driving about a mile north of Beacon, two men stood in the middle of the road to stop his vehicle for what he imagined was a holdup. When he kept driving, they threw a rock that dented his car.

A jury awarded Katherine Gordon immediate possession of her Holland Hotel after she sued John Hyatt, who was leasing it from her. The rent included 20 percent of his weekly gross receipts, she said, but Hyatt refused to show his books. The jury deliberated for 20 minutes.

The state commissioner of housing visited Beacon to inspect proposed sites for housing units but was not impressed with a proposal to renovate a hotel at 631 Wolcott Ave. known as The Nut Club.

A mess attendant at the Castle Point Veterans’ facility was killed at 1:30 a.m. when he was struck by a car on Route 9D. The 56-year-old World War II veteran was walking down the center of the highway in dark clothes, police said. The driver stopped, saw the body and drove to police headquarters to report the accident.

A Pawling High School student won the Dutchess County Short Story contest, although Beacon and five other schools did not submit enough stories to qualify. Beacon officials said none of its students’ stories would have been competitive.

A woman sued Pizzuto Bus Lines after she said she was sitting in one of its vehicles at a gas station when the driver disembarked and the bus started rolling down North Avenue. She said she was injured when she jumped from the moving bus and asked for $30,000 in damages. A jury gave her $1,100.

Beacon’s mayor appointed Carl Cummings, manager of the Texaco laboratories at Glenham, to the nine-member school board.

A man from Harrisburg, Pennsylvania, was arrested on charges of stealing neckties from W.T. Grant and Co. at 176 Main St.

Tatsua Abe was charged in Tokyo by Allied prosecutors with beating Corp. Joseph Carbonaro of Beacon while the American was a prisoner of war at Fufuoka 17. Carbonaro was captured in the Philippines and held for 42 months.

Jim Hurley, rod and gun editor of the New York Daily Mirror, spoke at a meeting of the Southern Dutchess and Putnam Sportsmen’s Association at its club on East Main Street.

Six members of the Dutchess County Legislature asked the state to delay or abandon a plan by Penn Central Railroad to increase its use of the 12-mile Beacon-to-Hopewell Junction branch line.

Michael Scoba, a senior at Beacon High School, received an appointment to the U.S. Military Academy at West Point.

Mayor Robert Cahill called late cuts in the state budget a “debacle,” noting that the city had budgeted for $191,000 in aid.

Martina Banks, 30, a mother of five, was sentenced to up to seven years in prison for the shooting death of her husband the year before. The judge said he had tried to squeeze the trigger of the .22-caliber pistol and found it hard to believe it could have gone off accidentally, as she claimed. The couple’s home, at 9 Chandler St., was demolished following her arrest as part of the city’s urban renewal program.

The state announced plans to lay off the 300 employees of the Narcotics Addiction Commission at the Mid-Hudson Rehabilitation Center in Beacon. Its 400 patients would be “phased out,” its director said. The center had been created four years earlier on the grounds of the Matteawan State Hospital.

After assaulting his ex-wife at her home in Glenham, Vincent Pisco, the owner of Vince’s Hideaway on East Main Street, led police on a high-speed chase before crashing on Liberty Street and firing two shots at officers. He then shot himself in the head. [Pisco survived and lost his liquor license because of the arrest.]

Dutchess Stadium agreed to host the Section I high school baseball championships and senior All-Star game. “We put the bug in people’s ears last year, and this year it’s become a reality,” said Beacon Coach Eric Romanino, whose team played eight games at The Dutch in 1995 and had five games scheduled there in 1996.

The Castle Point medical center held a ceremony to recognize 40 World War II veterans who had been prisoners of war, including Nicholas Magure, 82, of Beacon, who was imprisoned for nearly three years. “I weighed 174 pounds when I went in, and weighed 86 pounds when I got out,” he said. “It took six months to recover.”