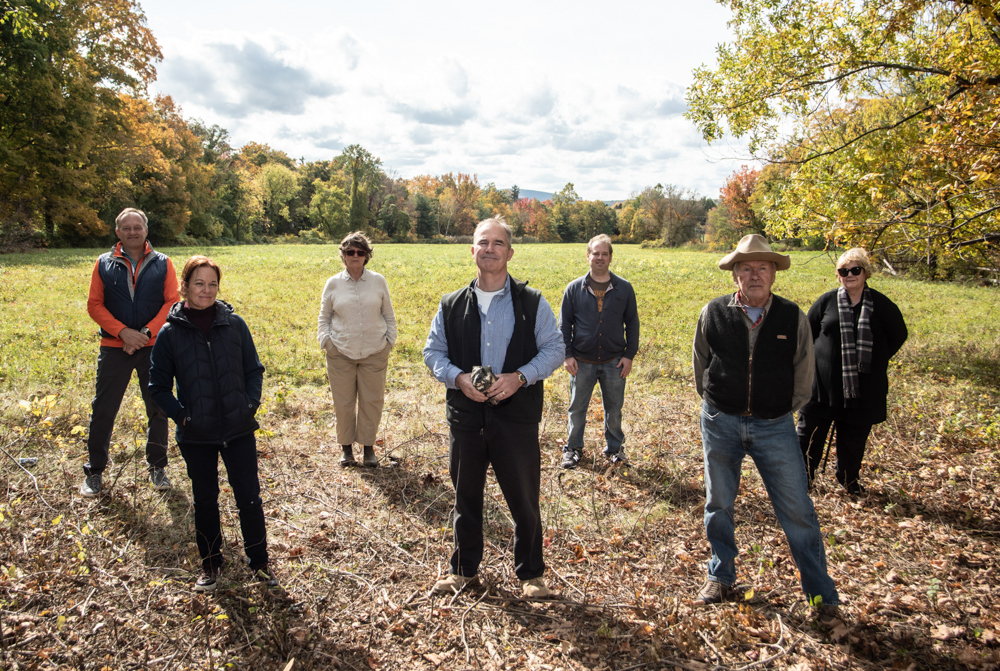 Lew Kingsley said it was Tim Donovan’s idea to start a community garden when he learned that a property across from the Desmond-Fish Public Library had been donated to Philipstown by the Open Space Institute and Scenic Hudson.

But Donovan credits Kingsley’s wife, Rita Jo Riehle. Before her death in 2018, her love of gardening brought them all together.

The community garden on the Garrison parcel at Routes 9D and 403 will be operated by the nonprofit New Leaf Restoration, which will stake out 50 plots measuring 4 by 10 feet. Memberships are $100 for the season. Plots can be shared and are available to any Philipstown resident.

As a former community gardener for a season here in Philipstown, I can say that the infrastructure New Leaf is providing is ideal. Deer and wildlife issues will be handled with fencing. The site has full sun. Water will be delivered with drip irrigation — the site’s biggest asset, I think. When I had to drive to a garden away from home, watering was time-consuming and prone to delays. Going away for a few days or a week? I had to hope that a friend would take over in return for the same favor.

When Donovan described New Leaf’s system, I was ready to sign up even though I have a garden at home. “There’s a cistern on the site that was used for Garrison’s Landing and we’re using a solar-powered water pump that will be set to automatically water the plots every day,” he said. This will be both a time- and plant-saving asset. As Donovan noted, it will also help to control traffic at the site since gardeners don’t have to show up daily.

Healthy soil for growing was the next challenge and board member and garden designer Grace Kennedy’s expertise led this effort. “Tilling wasn’t an option,” she said. “We didn’t have the equipment, for starters, and it creates three times the amount of weeds.” Instead, the garden beds are being built up with a 12-inch layer of wood chips from local arborists. This will smother the weeds and anything else growing there.

Next, Kennedy will cover the wood chips with newspaper as another weed barrier, and with layers of topsoil and compost. “As the wood chips break down, they’re adding nutrients to the soil,” she explains. “There’s no one right way to do everything but you can arrive at the same point.”

Wood chips will also cover the paths in the garden. Creating a planting medium in this way is a permaculture practice, building on top of the ground rather than digging.

Community gardens are more common in urban environments, not in places like Philipstown where many residents have yards. Kingsley said the mission evolved from the desire to have a community space rather than a private garden. Donovan focused on the positive cultural aspect, bringing people together who may have nothing in common other than a desire to garden. He also noted that many people in the Highlands don’t have ideal conditions for gardens.

“There is a lot of shade and slopes,” he said. “You need fencing because of deer, which can be expensive, and not everyone has easy access to water outdoors for plants.”

Studies show community gardens increase consumption of fruits and vegetables for the households involved even more than having a vegetable garden at home. It’s also demonstrated that participation in a community garden specifically lowers stress levels.

I know from my own experience that bonding with other gardeners and sharing expertise was a huge bonus of the community garden. This will translate well into our spread-out Philipstown, where people live in the nooks and crannies of woods as well as side-by-side in the villages.

To sign up for a plot, visit newleaf-restoration.org. Donations are accepted to support the nonprofit and to subsidize plots for gardeners with limited financial means.