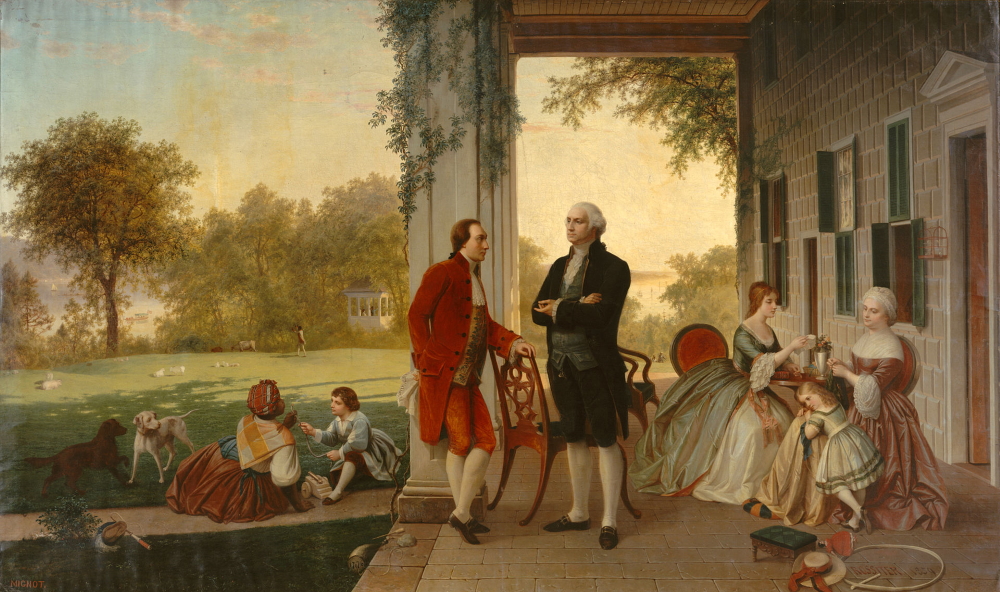 "Washington and Lafayette at Mount Vernon, 1784," by Thomas Rossiter, is owned by the Metropolitan Museum of Art. Rossiter had a home outside Cold Spring.

The Cold Spring Village Board of Trustees ordered 400 affidavit forms for people who wanted to make a claim against the village.

The village Board of Excise met to consider the application it received from the Pacific Hotel for an annual liquor license. However, it noted that the year before at least five establishments had served liquor. The board also received two applications for grocers’ licenses.

Justices Ferris and Ladue competed against their two respective sons in a “trial of skill” to shoot 22 birds from trap, with 18 yards rise and 80 yards boundary. The younger men won.

Burglars broke a window overnight to gain entry to the News Office and Variety Store and made off with tobacco, cigars and confectionaries.

An anonymous reader wrote the Cold Spring Recorder to ask “whether there is a law forbidding certain individuals that come under the name of ‘loafers,’ who generally hang around corners of public buildings (more particularly in the lower part of this village), from insulting respectable persons who necessarily have to pass them day and evening. Even ladies cannot pass them without hearing some low epithet uttered loud enough to be distinctly heard.”

The pupils of District No. 10 visited John Rusk at his home on Paulding Avenue to present their retiring principal with a gold pen.

A detective searched the trains at Cold Spring for two soldiers who deserted from West Point.

The Village Board discussed building a sidewalk from Town Hall to the Methodist Church. 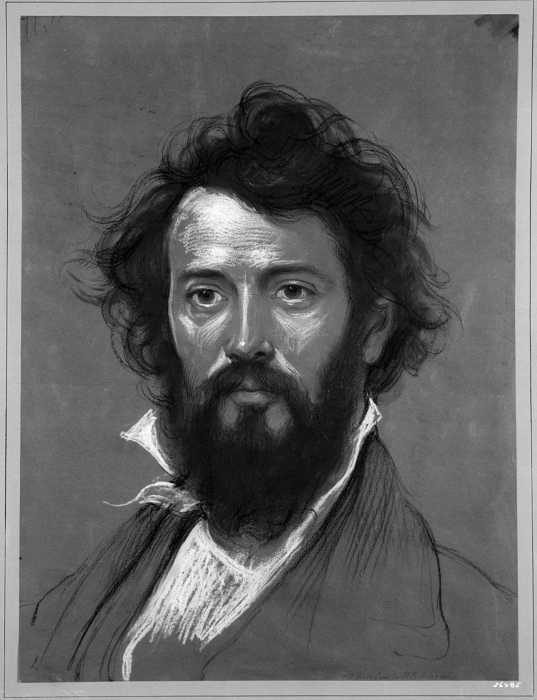 Henry Rossiter, 80, and his son, Thomas Rossiter, 52, a painter best known for his portraits of historical scenes, died in the same week. Henry was found outside his home after he apparently fell from a second-floor window overnight. Thomas died of an unspecified illness three days later. Thomas had moved to Philipstown with his family in 1860 and designed a house, Fair Lawn, overlooking the river near Cold Spring.

The excavation of the tunnel at Breakneck continued, with many of the laborers making their homes in Cold Spring.

After attempting to use soaped timbers to move the Garrison train depot, workers managed to reposition it with rolling stocks. At the same time, a ferry slip was being constructed opposite the depot.

A sudden jerk of the reins dislocated Thomas Jaycox’s shoulder. Several neighbors offered to reset it, but he sought out Dr. Murdock.

Washburn’s Sensation performed at Town Hall. The troupe included 20 performers, including gymnasts, “character delineators” and clog dancers. Washburn arrived in town via Fair Street and made a tour of the streets with his band and procession of wagons. 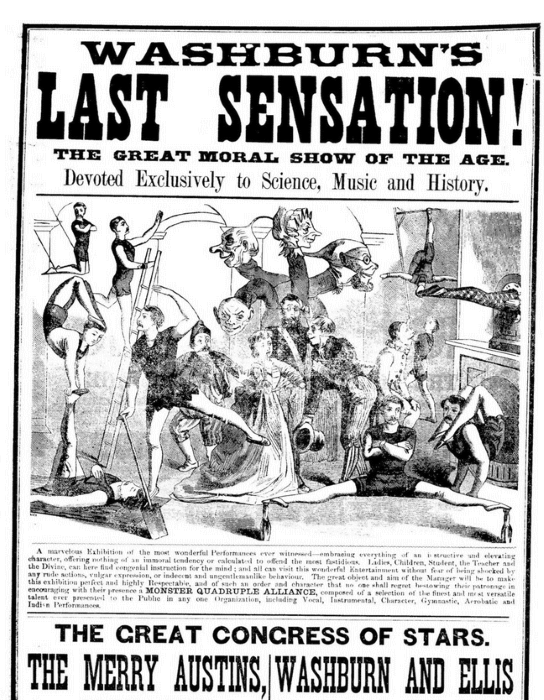 An 1875 poster for Washburn’s Sensation

The two daughters of Jeremiah Lynch were brought home to Philipstown to recover after falling ill in New York City with smallpox.

The Village Board gave C.C. Griffin the OK to put up a “No Parking” sign in front of his home on Chestnut Street.

The board raised the fees paid by peddlers and vendors by 50 percent to cover the cost of the police officer assigned to enforce local ordinances.

The Lending Library Committee closed its list to new members.

The ferry company in Garrison began building an ice cream parlor in part of its ticket office. At the same time, it expanded the office to allow two agents to work at the same time.

A crucifix imported from Munich that measures 12 by 4 feet, with a 5-foot-8-inch figure of Jesus, was installed at Our Lady of Loretto by Miss Alice Casey in memory of her brother, Sgt. George Casey, who died in France in 1918.

Madam Sani noted in an advertisement that she would advise clients in love or business by reading palms at the Woods building daily from 9 a.m. to 9 p.m.

Bessie Jaycox sold the lot in front of the Hill Country House resort in Garrison to New York City developers who planned to construct a restaurant and service station.

The body of Sgt. R.E. Burns, who died in France, was returned to Cold Spring. His coffin was taken by members of the American Legion from the train to the Knights of Columbus Hall to lie in state until interment at Cold Spring Cemetery.

Among the residents who had moved from New York City to their summer estates in Garrison were Stuyvesant Fish at Glenclyffe; Samuel Sloan at Lisburne Grange; Vanderbilt Webb to his farm; Hamilton Fish at Rocklawn; and William Church Osborn at Forest Farm. 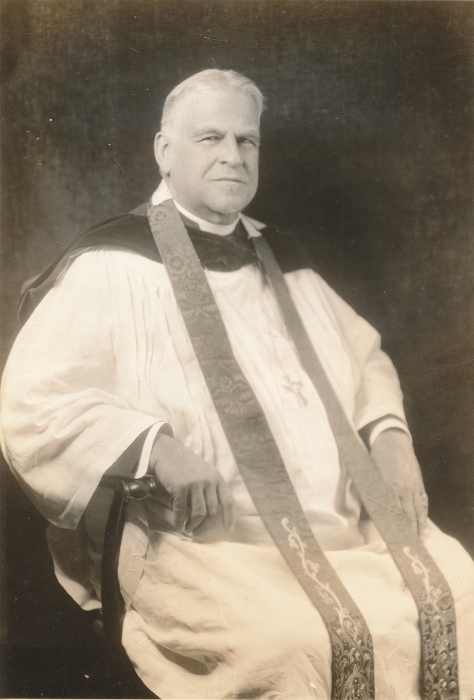 The Rev. Elbert Floyd-Jones was the rector at St. Mary’s for 51 years.

The Rev. Elbert Floyd-Jones, rector of St. Mary’s Episcopal Church, died at age 79 at his desk in the rectory. He was discovered by taxi driver Owen Devine, who had been summoned to pick him up to visit a parishioner. Dr. Coryell Clark declared him dead. Just a few minutes before the call, Floyd-Jones had been in the parish house helping arrange tables and prizes for a benefit card party for Butterfield Memorial Hospital. He had been rector for 51 years and the month before had published A History of the Village in connection with Cold Spring’s centennial celebration. He was also the author of histories of highway milestones and of the Cold Spring Fire Co. Growing up, the minister had spent his summers in Garrison and was ordained into the priesthood at St. Philip’s Church there in 1894.

Mayor Ray LeFever reported that he had met with Clay Fonda to discuss his K-9 Dog Kennel on Route 9 becoming the village dog pound. However, the mayor said Fonda’s $1,095 annual fee was too much, especially since he didn’t own a vehicle to actually pick up any loose dogs. At a Village Board meeting, trustees asked why the county dog catcher couldn’t patrol Cold Spring, since all the dog-license fees were sent to Carmel.

LeFever expressed displeasure that his request for a list of police court proceedings, including the names of defendants and their punishments, had been ignored.

A Monday night Haldane school board meeting that lasted until 3 a.m. was attended by nearly 250 parents, students and faculty members to discuss three coaches relieved of their duties and two teachers who were not given tenure. The coaches also happened to be the leaders of the teachers’ union. During the 7.5-hour meeting, five probationary teachers also were dismissed.

On the following Wednesday, at another meeting also attended by about 250 people, the board reversed itself and granted tenure to the teachers and rehired the coaches. The only member of the board not present was its president, Joseph Perpetua, who missed his seventh consecutive meeting.

Letters to a New Generation (For Today’s Inquiring Teen-Age Girl), by Gladys Denny Shultz, was added to the Butterfield Library. The Garrison resident began her career as a reporter for The Des Moines Register and later created the Department of Child Care and Training at Better Homes and Gardens, which she ran for 18 years. She also spent 15 years at Ladies’ Home Journal.

A two-hour parking limit went into effect on Main Street in Cold Spring.

Haldane won all seven of its league matches and tied for first among smaller schools at the 28th annual Dutchess County Scholastic League Track and Field Championships. At one match, Jeff Macaluso set a school record of 15.7 seconds in the 120-yard high hurdles.

The ribbon was cut for the opening of the last 6 miles in Putnam County of the newly constructed Interstate 84.

REMEMBER WHEN — Charlene Clauss shared this photo from the early 1970s of the Philipstown Packerettes. “My mom, Joan Clauss, made our uniforms,” she said. Many locals spotted friends (and themselves) when she posted the image on Facebook. 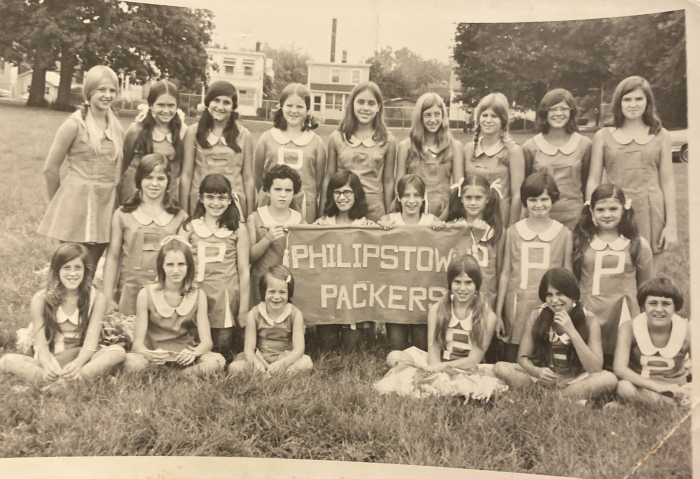 About 1,800 customers along the Route 9D corridor lost power when a storm hit on Saturday night at 5 p.m. The Depot was the only restaurant in the village to lose power, and six trains were delayed north of Garrison because of a fallen tree. A tent also collapsed with about 150 people inside at the Garrison Art Center, which was holding its annual Artists on Location auction, but no one was injured.

The Carolyn Lahey Pavilion at Butterfield Hospital was renovated at a cost of $250,000 as a medical center for a dozen doctors.

A Putnam County teenager was charged with stealing musical instruments from Haldane and selling them to a store in Manhattan.

More than 100 Haldane High students were shown a staged two-car accident at the school campus arranged by the school’s substance abuse coordinator. The accident was said to have occurred on prom night because of a drunken driver. The Philipstown Ambulance Corps, Cold Spring Fire Co., Putnam County sheriff and Alamo Ambulance Service extricated three student actors from the wrecks.

Jeremy Timmons carried a no-hitter in 90-degree heat into the seventh inning of a Little League game. He had 14 strikeouts before an error cost his team the shutout.

Zachary Petkanas, 10, a student at the Garrison School, was cast as the lead in Gian Carlo Menotti’s Amahl and the Night Visitors during the Festival of Two Worlds in Spoleto, Italy. Most recently, Petkanas had appeared in a Paramount Theater production of A Christmas Carol at Madison Square Garden, playing Scrooge at age 8. He also appeared in 1994 on the soap opera As the World Turns. [He is now a political strategist who directed rapid response for Hillary Clinton in 2016 and later built the “Trump War Room” for the Democratic National Committee.]