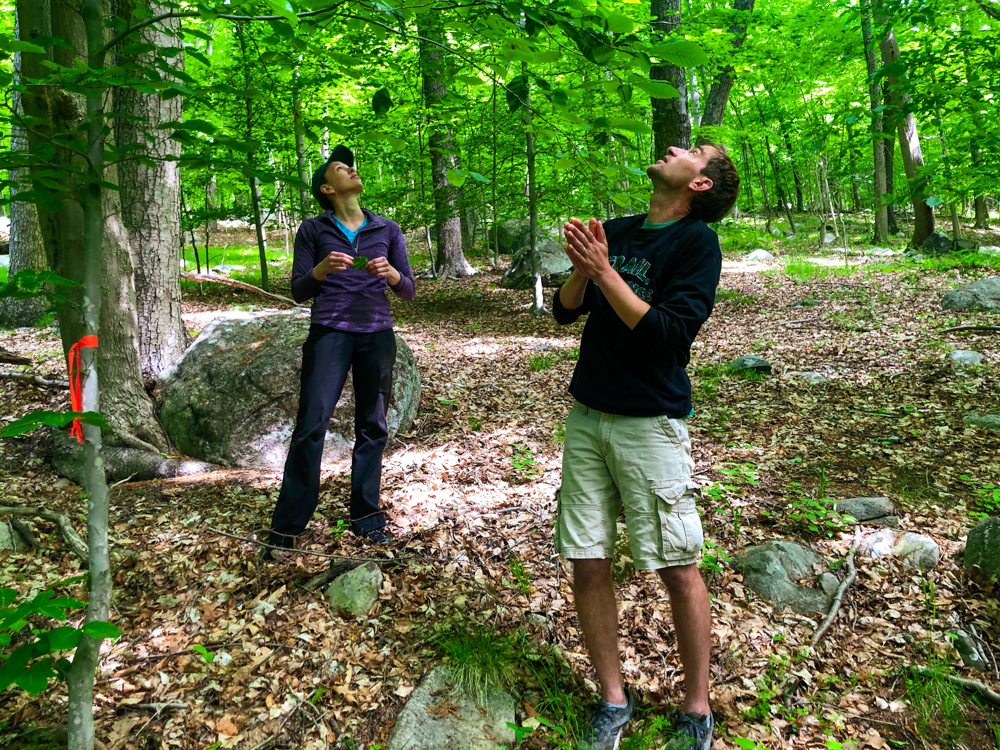 “When you’re dealing with the early parts of a pandemic,” said Brent Boscarino as he rubbed his hands with sanitizer at the Granite Mountain Preserve in Putnam Valley, “you take the conservative approach until you know more.”

Boscarino wasn’t referring to COVID-19, but to another new, deadly disease with unknown origins that recently hit the Highlands: beech leaf disease, which was discovered last week at the preserve. Boscarino works for the New York-New Jersey Trail Conference, where he coordinates “citizen scientists” who report and track invasive species.

One of the many things that’s unclear about the disease is how it spreads. Human contact hasn’t yet been ruled out, which is why after examining one of the stricken trees Boscarino applied hand sanitizer and sprayed his boots with disinfectant. 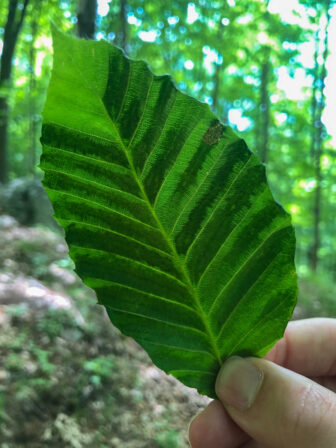 Beech leaf disease was discovered in Ohio in 2012 when researchers noticed deep green stripes appearing on leaves. In time, the leaves shrivel and fall off. The disease also appears to affect the ability to bud; leaves do not grow back and, deprived of the ability to photosynthesize, the trees die within a few years.

As reported in The Current’s “The Fading Forest” series in December, foresters in 2020 noticed that beech leaves in Fahnestock State Park had started to shrivel and grow leathery. At the time, beech leaf disease hadn’t been detected in the Highlands, although it had reached Westchester.

Because the Fahnestock trees hadn’t shown the characteristic deep-green banding, the jury was out as to whether the trees had beech leaf disease or if they were just showing the effects of an unusually late frost.

The good news is that the Fahnestock trees returned to normal in the spring and lab tests failed to detect any microscopic worms called nematodes that are associated with beech leaf disease.

The bad news is that early last week, Nicole Wooten, the director of natural resources for the Hudson Highlands Land Trust, which manages the Granite Mountain Preserve, was there with a work crew that, laden with chain saws, stopped under a tree to rest. As it happened, it was a beech, and the crew saw deep green stripes on the leaves. Wooten also found the stripes on other beeches.

Much remains unknown about the disease, although science is moving quickly to keep up with its rapid spread. In the past year, scientists have come to a consensus that the nematodes aren’t just a symptom but likely cause the disease. Tests have shown that the worms are non-native, which means the disease itself can be classified as an invasive species.

How the disease spreads is one of the biggest puzzles. Along with human hands and boots — or campers moving firewood, hikers brushing against trees and beech trees being transported to nurseries — researchers are looking at birds, snow melt, spider mites and root systems.

The nursery theory is of particular interest because the disease first appeared in Ohio and then in Connecticut, skipping several states. Moths or birds probably wouldn’t have gone from Ohio to Connecticut without stopping, but beech trees being transported by humans would have.

However, as Wooten pointed out, it’s possible the disease did spread to every state but just wasn’t noticed.

“There’s no clear answer,” said Boscarino. “Right now, it’s about early detection, and getting as much reporting as we can about its range so we can understand how it’s spreading. The best way to do that is to get a good mapping.”

The best way to get a good mapping is to enlist the public to report any dark green bands on beech leaves. Since the leaves will eventually shrivel, now is the best time of year to look.

Citizen scientists can utilize two free smartphone apps to help track beech leaf disease. iNaturalist can be used to identify beech trees and other plants and will add the GPS location of identified beech trees to a database accessible to researchers. Users identify plants by taking photos of them, which are tagged and uploaded. If the leaves are clearly diseased, researchers will notice. Locations can also be uploaded using iMapInvasives.

For those who don’t know a beech tree from a beach ball, and don’t want to photograph every tree in the woods, the mnemonic device “waves on the beach” will help you remember that the serrated edges of beech leaves resemble a child’s drawing of waves.