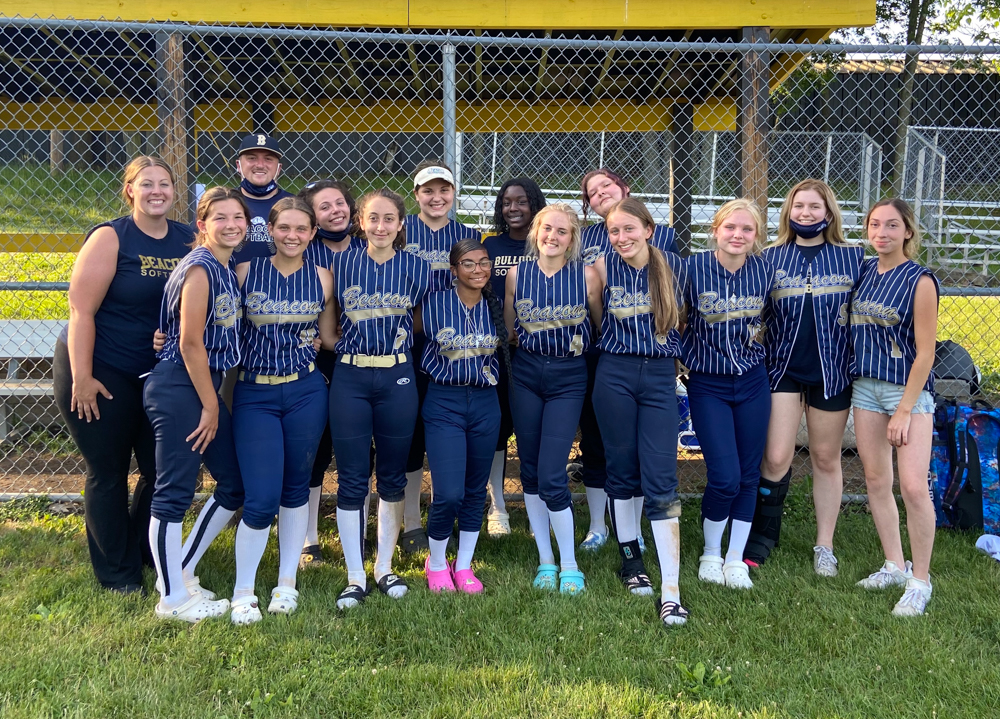 The Haldane High School’s boys’ lacrosse team, seeded No. 5 in the Section I, Class D tournament, pulled off an upset on Monday (June 7), eliminating No. 4 Blind Brook, 10-9.

The Blue Devils advanced to Wednesday’s semifinal at No. 1 Irvington, which built a 9-3 halftime lead on the way to a 12-4 win to end the Haldane season.

Evan Giachinta had two goals for Haldane and Will Sniffen and Darrin Santos each had one. Keeper Andrew Aistin, who filled in for an injured Jordan Hankel, had 11 saves. 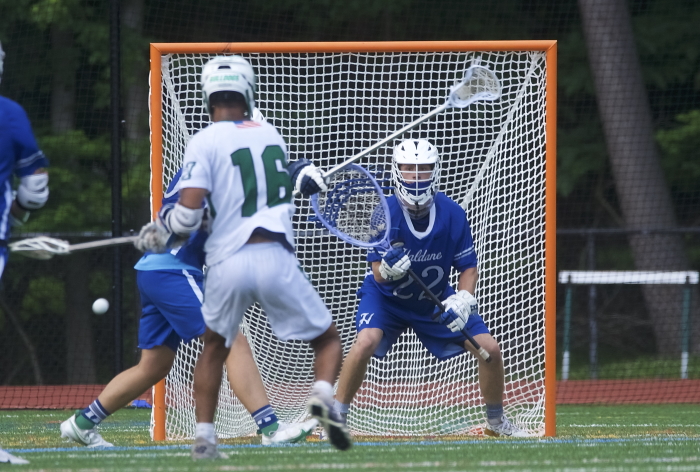 “To get back to the semifinals two years in a row is a great accomplishment,” said Coach Ed Crowe. “Andrew did an amazing job for us in the cage, and we wouldn’t be here without Darrin Santos.”

Santos, a senior caption, said he was pleasantly surprised to be back in the semifinal, although “we could’ve played a bit better. We’re a young team, so they’ll be good next year. We made it here last year [in 2019, before the pandemic shutdown], and I’m kind of shocked to be back here again.”

Santos said he and twin brother, Dan, enjoyed playing their final high school season — and game — together before heading to separate prep schools in the fall. 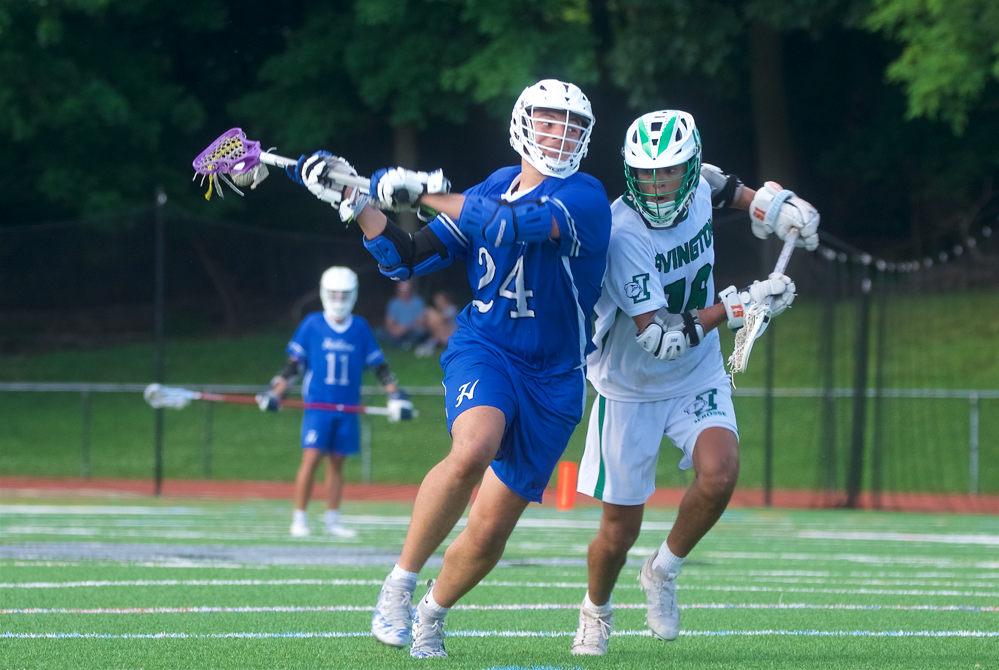 Dan Santos (24) winds up for a shot at goal in the semifinal game at Irvington. (Photo by S. Pearlman)

“We been playing together since we were 4 years old,” he said. “But now we’re 17, and we’re done. It’s sad, obviously, but we had a good spring — after it was pushed back and back [by COVID-19 restrictions] — and we were grateful to be playing.”

In the quarterfinal win over Blind Brook, Haldane got five goals and a pair of assists from Darrin Santos, Liam Gaugler scored twice and Aistin had 15 saves. “It was one of the best performances of the year” by the team, Crowe said.

The Beacon High School softball team, seeded No. 12 in the Section I, Class A2 tournament, saw its season end on Saturday (June 5) with a 20-5 loss to No. 5 Nanuet.

“That was a tough loss to a good Nanuet team,” said Coach Michael Carofano. “We had one of our better days at the plate, but errors hurt us.

“Though the season did not go as planned, I’m proud of our girls for battling adversity on and off the field,” he added.

“I think that speaks volumes, when the other opponents in our league were Arlington, John Jay, Ketcham and Lourdes,” Carofano said. He also thanked his seniors — Jade Matias, Bernadette Kish and Kelly Murphy — for their dedication to the program.

Haldane High School, the No. 4 seed in the Section I, Class C tournament, nearly pulled an upset on Saturday (June 5) of No. 1 Tuckahoe, falling 4-3.

John Dwyer started on the mound for the Blue Devils and went four innings with Trajan McCarthy pitching the final two. At the plate, Jack Jordan was 3-for-4 with a double and an RBI.

“That was an amazing game, and hard-fought on both sides,” said Coach Simon Dudar. “After having a pretty hard year record-wise, it was incredible to see our guys come out with the amount of fire and passion that they did and push the No. 1 seed to the brink. With such a young team, the confidence this last game gave them will be immeasurable.”

“Dwyer, Ryan Eng-Wong and Ryan Merritt were all big for us,” Dudar said. “And our younger guys — Jeremy Hall, Trajan McCarthy, Julian Ambrose, John Kisslinger — started every game and played up to the varsity level. They’re the making of a good core of ballplayers moving forward.”

The Beacon High School baseball team, seeded No. 7 in the Section I, Class A2 tournament, defeated No. 10 Nyack, 2-0, on Saturday behind an RBI by Joey Vollaro and six strikeouts by Matt Manzoeillo on the mound.

That put the Bulldogs in the quarterfinals, where their season ended with a 10-0 loss to No. 2 Tappan Zee.

For the girls, Alicia Williams took second in the high jump and Tianna Adams was third in the pentathlon 800.

The Haldane boys placed 10th at the meet, and the girls were 12th.

Jake Patinella took fourth in the javelin, while Everett Campanile finished 10th in the 1,600 meters in 4:49.42. For the girls, Andriea Vasconcelos took sixth in the triple jump and Eloise Pearsall was 13th in the 800.