“Faceted Panel,” by Derek Porter, is installed over the kitchen and dining area in the main house. (Photo by Vivian Linares)

With grant and vision, site brings art out of storage

Manitoga, the Garrison site which includes industrial designer Russel Wright’s home, studio and designed landscape, is like a parent of several children: a need pops up in one just as another is being tended to.

In the 20 years since Manitoga became a nonprofit and opened the estate for tours and hiking, there has been one persistent difficulty: How can the nearly 2,000 objects in the Wright collection be displayed in a relatively small space?

The solution, years in the making, was finalized recently with the opening of the Russel and Mary Wright Design Gallery, which has been added to the daily tours that run through Nov. 8. 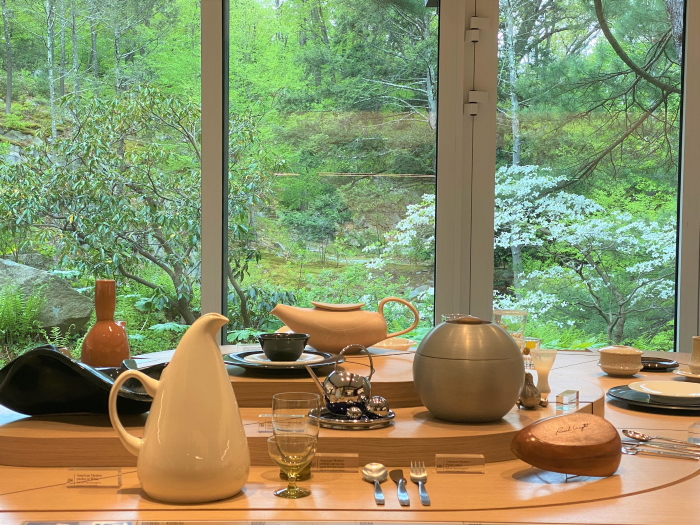 The initial discussion about how to display more of Wright’s work began at a board retreat in 2013, said Allison Cross, Manitoga’s executive director.

“Some board members who were collectors raised the issue of product design legacy,” she recalls. “We had only a small design collection and promises of gifts, but even then the questions were, ‘Where do we put it? How do we steward it? It’s an integral part of Manitoga; should we show the full collection?’”

Because the goal, she says, was “to present Wright’s integrated legacy, which is the landscape, architecture and product design,” the board decided to first stabilize the buildings, interiors and the landscape before “expanding our narrative” with installations and scholarship.

This is the eighth year of Manitoga’s artist residency program, which was launched “to foster creative responses” to the house and gardens “that invoke Russel Wright’s legacy of creative experimentation and celebration of place.”

The 2021 responses are “Tea House,” which Yoshihiro Sergel and Diana Mangaser of YSDM Studio constructed in Mary’s Meadow, near the public parking lot, and “Faceted Panel,” an installation by Derek Porter in the main house above the kitchen and dining room area. 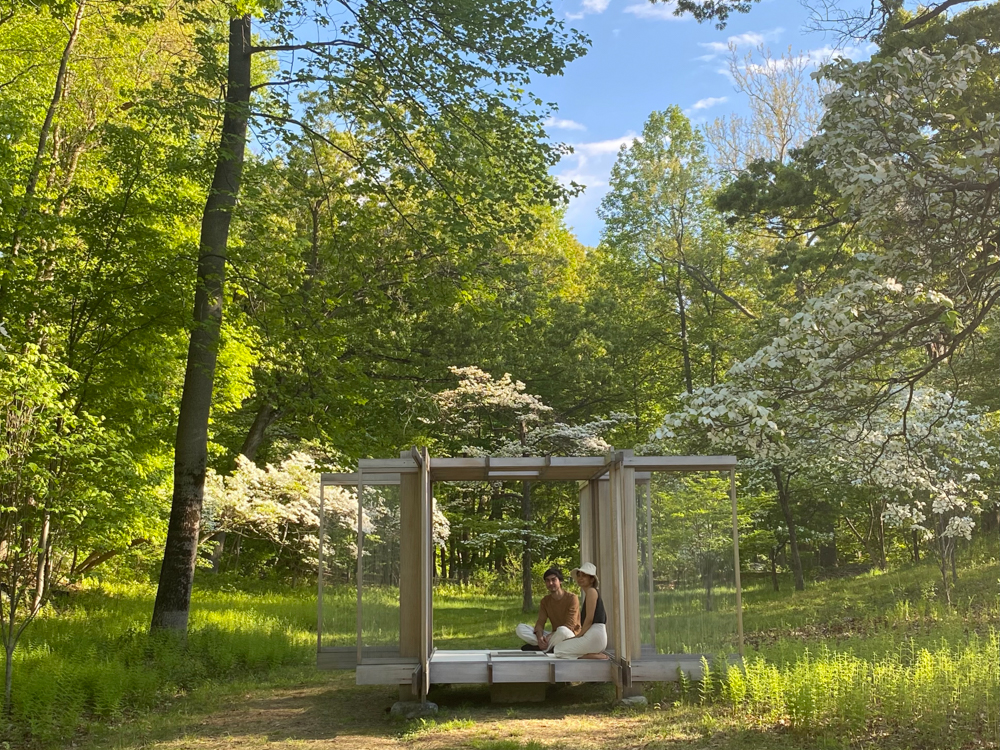 Yoshihiro Sergel and Diana Mangaser sit in “Tea House,” which they designed for Manitoga. (Photo by Vivian Linares)

Sergel and Mangaser say they considered a few locations before deciding on the meadow for “Tea House,” which they placed on stone footings with a center hearth. The structure was handmade with cedar, string and paper. In the fall they plan to hold a tea ceremony and musical performances there. People are invited to remove their shoes and sit inside “to find calm and rest the spirit,” they say.

“Faceted Panel” uses industrial stainless-steel reflectors arranged in patterns to reflect changes, from the time of day to seasons. Porter says the material is designed to evoke and involve the surrounding nature, which is visible through floor-to-ceiling windows.

To that end, the staff offices were relocated to a nearby location to free up space in the house. A small powder room was made into an exhibit space to gauge reactions. The bedroom wing, which had been offices and program space for artists doing residencies, was retrofitted.

The board was encouraged by a Luce Foundation grant for $300,000. “This validated it and inspired board members and others to turn their long-term loans into gifts,” Cross says. “We also renovated the former garage into a reception area, with a public restroom and a kitchenette, so we no longer need to use those parts of the house.” 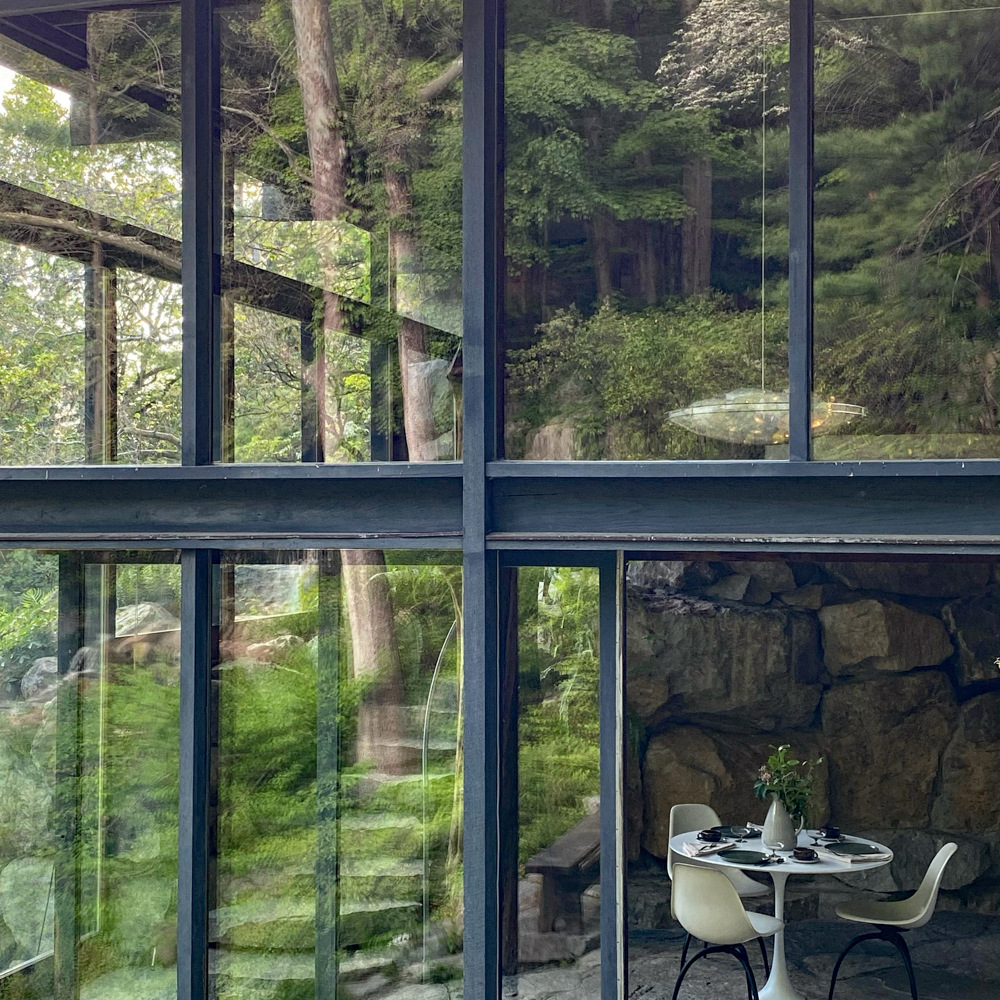 The dining area (above) is visible through floor-to-ceiling windows. (Photo by Vivian Linares)

The transformation was completed by Studio Joseph, a New York City firm that specializes in exhibition design and was recommended by a board member, Donald Albrecht. “Donald envisioned the thematic organization of the exhibition space,” Cross says. “He had the vision of ‘This is what we’ll present,’ and together we went through the objects to demonstrate as much breadth as possible, focusing on classic lines.

“The idea was to have visual impact so people could see the variety,” she says. “There are walls organized by color, form and pattern, and there’s a central pedestal timeline. The fourth wall of the gallery is the glass windows and doors from which you can see the quarry. It all makes for a beautifully integrated picture, from which people see how sculptural the forms are, and the patterning of the botanicals, taken right from the property.”

Substitutions can be made to the exhibit, although Cross says that will likely happen only every three or four years. Cataloging will begin soon, followed by scholarship and expanding programs.

“It’s a complex place — we’re talking about plates and hemlock trees in the same meeting,” Cross says. “Forests have their own big, challenging, environmental issues. The strategy is having a board that represents the three prongs and acknowledges all of them.”