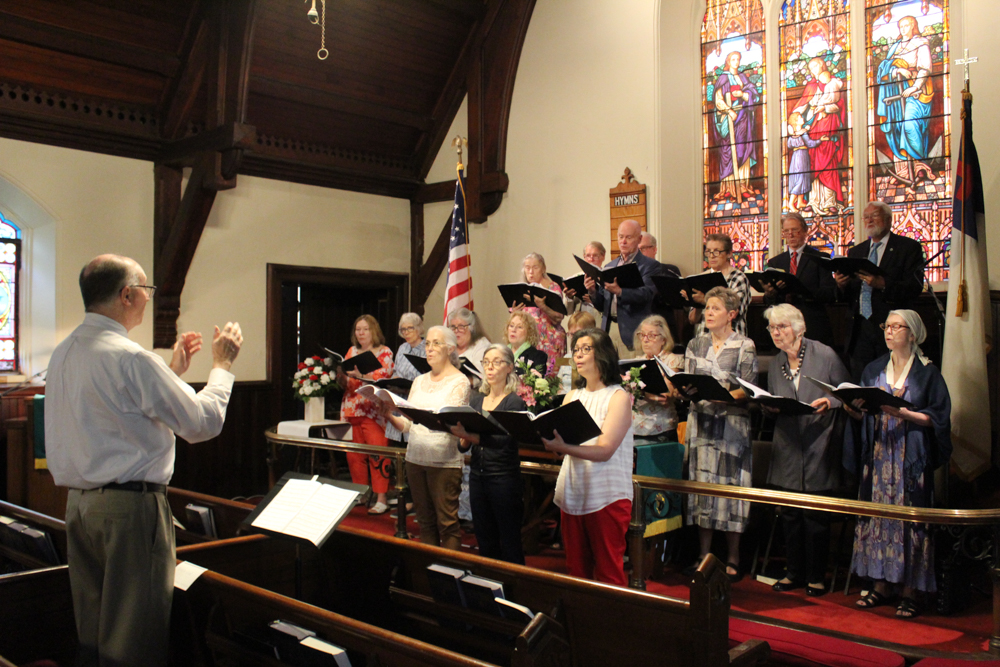 After the reading from the Book of Mark of a parable about the growth of a mustard seed into a tree, it was not the voice of a minister who broke the silence in a tiny 132-year-old church on Snake Hill Road in Garrison.

Instead, Carolyn Doggett-Smith walked to a podium in a corner of the nave on Sunday (June 13) and recited her difficulties over the past year: confined to home because of COVID-19; being unable to sing with the St. Philip’s Episcopal Church choir; seeing the Garrison church splintered by the resignation of its longtime music director; and a subsequent exodus of members.

Then, using words like “rebirth” and “renewal,” she spoke of performing and worshiping each Sunday again in a new home, a barely used sanctuary across the road from The Garrison golf course.

“This is yet another resurrection; not only for me, but for all of us,” she said.

The building, the former South Highland United Methodist Church, is filled again with worshipers, singing and music each week, a change born of conflict.

Durward “Woody” Entrekin Jr., who was the music director at St. Philip’s for 21 years, resigned in November over what he says was a shift in a church many joined for its inclusiveness. His decision triggered a revolt by other longtime St. Philip’s members, including nearly every member of the choir.

Seven months later, the former St. Philip’s choir members are holding a nondenominational service each Sunday morning in the former Methodist church, having named themselves the Highlands Choral Society and referring to the building as The Highlands Chapel.

Entrekin, a Yale-educated organist and professor of music at Mount Saint Mary College in Newburgh, is again leading the choir. Friedrike Merck, who joined the choir at St. Philip’s five years ago, is the society’s president.

With the exception of a sermon given on June 6 by a Presbyterian minister, each service features a “reflection” read by a member of the congregation or the community and music combining traditional hymns with selections by Bach, Beethoven, Mozart and other composers. The services are steeped in informality, with Sunday’s readings including lyrics by Bob Dylan and the guest minister quoting Yoda, the Jedi Master from Star Wars, in his sermon. Sharing the pews are Christians and Jews, along with atheists, agnostics and Buddhists.

“When this group reached out to me, that they were starting, I was thrilled to come and try something different because it’s still all people who I’ve known for years,” she said.

Entrekin said the “the joy of working at St. Philip’s had gone,” and he echoed a charge lobbed by others who have left: that St. Philip’s felt more doctrinal and less inclusive than when they first joined. The Rev. Amanda Eiman, who became St. Philip’s rector in January 2020, succeeding Geer, said the church is “very saddened” that anyone would feel that way.

“St. Philip’s continues to worship in the Episcopal tradition as we have for 250 years, and remains blessed to have the opportunity to welcome all people to worship with us and be part of our community, no matter who we are or where we are on our journey of faith,” she said.

Merck said she and other choir members who left St. Philip’s began talking in February about reconstituting themselves, with Entrekin as music director. Their search for a building led to South Highland United Methodist, whose members voted in 2017 to merge with the Cold Spring United Methodist Church. Built in 1889, the church was only being used for special services.

The Highlands Choral Society signed an agreement to lease the building and scheduled its first service for April 4, which was Easter Sunday. The choice of that date for the inaugural service was intentional, said Merck.

“Easter and spring and renewal — they defined what we were going through,” she said.

Because of pandemic restrictions in place at that time, only a soloist performed. Then the choir began rehearsing and now performs as a group, without masks, the first time they have done so since the pandemic shutdown. The first time they sang together “was incredibly moving,” said Merck.

“It wasn’t just the choir coming back, it was us as people, some of us who live alone and who had been incredibly isolated for over a year,” she said.

Attendance averages about 50 people, according to Merck, who expects the reading of reflections to continue, with occasional sermons by guest ministers and the giving of communion. The Highlands Choral Society, now registered as a nonprofit, is also considering buying an electronic organ, said Entrekin.

After each service, attendees walk down to the basement to talk and share coffee and snacks.

Christopher Radko, standing in the basement after the June 6 service, said he has “never seen people so happy” to go to church on Sunday. “If St. Francis was here, he would say, ‘I’m down with this,’ ” he said.