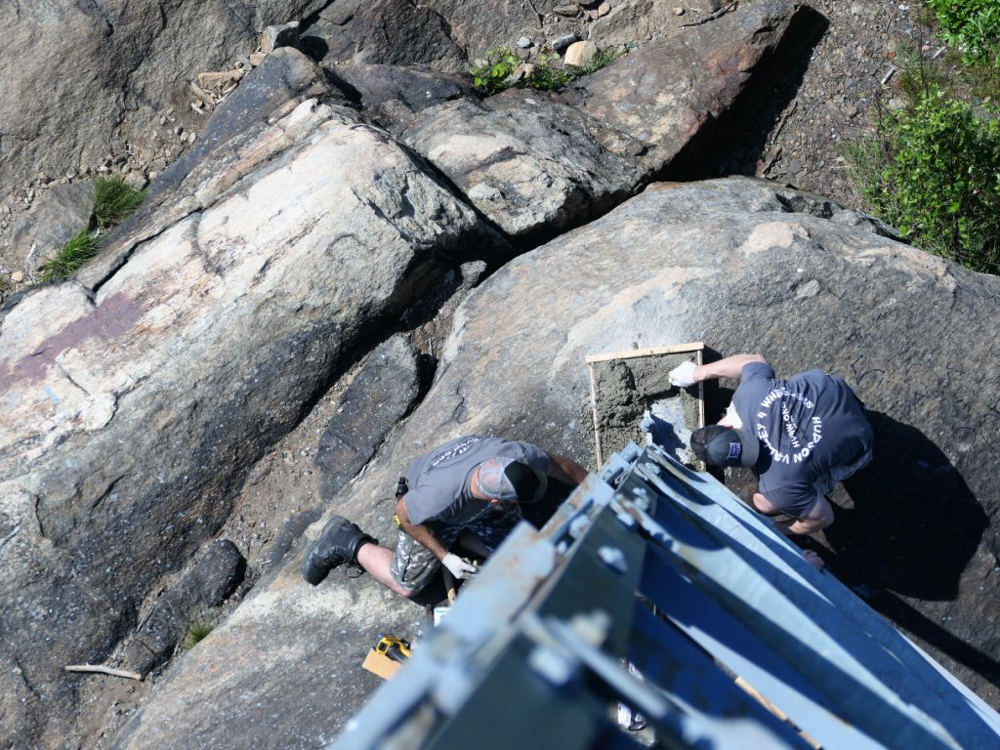 Volunteers repair concrete at the base of the tower. (Photo provided)

On July 13, 1931, The New York Times published a brief notice that work had begun on a 60-foot steel observatory atop Mount Beacon that would allow rangers to watch for forest fires from a glass room.

“With the aid of powerful telescopes, the observers, on a clear day, will be able to obtain a view of the countryside within a radius of 70 miles or more,” it reported.

That was the birth of the Beacon Fire Tower, although it was not the birth of rangers watching for fires from the summit. From April 1922 to June 1924, Ray Hustis of Cold Spring served as the lookout, for which he was paid $90.20 a month. After Hustis, there wasn’t another ranger regularly at the summit until the tower was erected in 1931 and George Lamoree of Beacon took over for $100 a month. A cabin was also built on the Route 9 side of the ridge for the observers to live in.

The tower had six more observers — George Ketchum was the longest serving, from 1940 to 1971 — before the last in 1972. After that, the tower was kept in stand-by mode until it was decommissioned by the state and fell into disrepair. 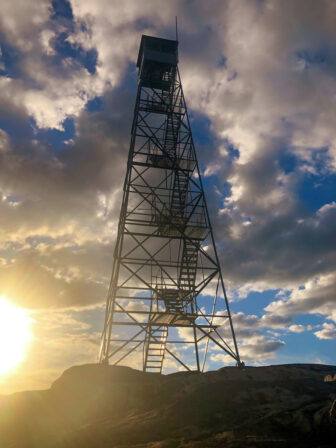 The nearly 90-year-old Beacon Fire Tower (Photo by B. Cronin)

David Rocco, after volunteering for years to get the decommissioned elevated railway line in Poughkeepsie turned into the Walkway Over the Hudson, organized an effort in the 2000s to restore and re-open the tower. Aided by relatives of two of the original observers, and with the blessings of Scenic Hudson and the state parks department to use Jeeps to bring materials to the summit, the volunteers spent several years restoring the landmark.

Rocco convinced the workers dismantling the train tracks at the Walkway to give him the grates for the tower. In 2013, at a re-opening ceremony, Pete Seeger led the crowd in “Amazing Grace.”

Maintenance work has continued since. And with the tower’s 90th birthday approaching next month, new volunteers have climbed the summit for a round of repairs. Graffiti has been a constant problem, but Brett’s True Value Hardware in Beacon donated the kind of paint used on subway cars, which allows graffiti to be wiped off with a sponge. The concrete bases that hold the tower in place on the rock face have begun showing cracks, so repairs were done there, as well.

“I still can’t believe people go to all that trouble to bring spray cans up there,” Rocco said of those who vandalize the tower. “But I’ve seen worse.” In April 2020, shortly before the trails were closed due to the pandemic, Rocco noticed bullet holes in the walls.

“It’s utterly stupid,” he said. “The bullets are obviously going through it and landing somewhere else. Thank God no one on the trails below got hit.”

As with the last round of repairs, Rocco again has received permission from the state to allow Jeeps on the summit. “I can’t say enough good things about the Hudson Valley 4 Wheelers,” he said. “They help us bring up the materials, and when we get there, they get out and help.”

The next round of repairs, and a ceremony marking the tower’s 90th anniversary, are planned for June 26 and 27. (Anyone interested in volunteering can email [email protected]) Rocco would also like to put up more safety railings and reinforce the fencing but has abandoned the idea of rebuilding the observer’s cabin at its original site down the ridge. “It’s so far out of the way, and no one would be there” to monitor it, he said. “Shit could go down.”