A new perspective on wildflowers

When my child was learning to walk, I joked that she had picked every dandelion in Cold Spring. She’d gather as many as I could carry in huge handfuls. Buttercups were appealing, too. I trained her to leave the flowerbeds alone but anything in the lawn was fine for picking. 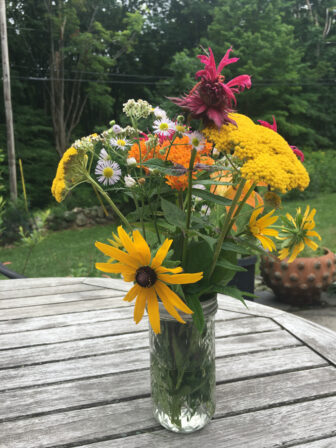 Now she’s older and knows where the scissors are kept and still delights in picking flowers. I’m adapting to seeing our blooms as vase-worthy, and not just in their ecological role. Honestly, there’s enough for everyone.

Cutting gardens, on a large scale, were used to fill estates with a supply of fresh flowers year-round. Typically, lists of plants for a cutting garden include bulbs for spring and fall with a mix of summer annuals and perennials chosen for their striking appearance. Native plants and wildflowers, the backbones of ecological landscaping, aren’t top choices. Maybe it’s possible to do both, though.

It’s commonly advised that a floral arrangement should be one-third each of structural blooms, foliage and filler. Images quickly pop into my mind of grocery store bouquets, including dahlias, baby’s breath and daisies with a few stalks of salvia. Tulips, no matter the season, are another staple.

I trialed a flower arrangement with what I could forage in my yard. I found an orange day lily, black-eyed Susans, butterfly weed, white yarrow, ox-eye sunflowers, red bee balm, pale yellow yarrow, tickseed and fleabane. The young child approved, but she isn’t the toughest critic and I didn’t follow the 30/30/30 formula. I appreciated the results and returned a caterpillar we found on a stem to the outdoors again.

After a few days, the red bee balm (Monarda didyma) and lily had wilted dramatically. Another tip learned from this is to use the freshest blooms. Cutting just before the flower blooms is probably the best route for the longest indoor results.

Here’s a guide to choices for a cutting garden that also have ecological impact:

Yarrow (Achiliea millefolium): In my test arrangement, the yarrow held up the longest. It also has a strong stem to rise above other blooms.

Lavender (Lavandula spp.): No one could argue with having lavender in the house.

Ox-eye sunflower (Heliopsis helianthoides): This multi-stemmed plant has a profusion of yellow flowers and can stand up tall among other blooms in a vase. While sunflowers are striking, too, varieties that have a single flower head can leave a gap in the garden when they are cut down.

Iris (Iris versicolor): There are native irises that bloom in shade and wetter conditions at different times of the year, and produce strong flowers.

Spiderwort (Tradescantia ohiensis): This could be a substitute for iris or look great with iris.

Ferns: Hay-scented fern, ostrich fern, cinnamon fern, Christmas fern — there are many choices and an arrangement could include more than one type as a way to showcase the flowers.

Wild rye (Elymus canadensis): I appreciate this grass for the delicate seed heads and curving shape.

Side oats grama (Bouteloua curtipendula): The golden color of this grass at the end of summer would complement any arrangement.

Black-eyed Susans: These make the list because they are so easy to grow and I usually have more of them than anything else in the garden.

Cosmos: This annual plant wins its spot in a pollinator garden because it is a good nectar source. Easy to grow in not-so-perfect soil, cosmos can be cut and then can bloom again.

Mountain mint (Pycnanthemum tenifolium): While I love watching the butterflies flock to this plant, its cool colors are a unique addition to a bouquet.

Perennials and bulbs that had a single bloom, like obedient plant, blazing star and blue vervain, didn’t make the list because they are less prolific in my garden and take a few years to come into their full potential. I also didn’t include the more commonly known dahlias, zinnias, roses and delphiniums. I wanted to cast a new angle on the cutting garden and make a case for growing pollinator-friendly native plants for enjoyment inside the house as well as their ecological purpose.

The aspect that doesn’t come as readily from wildflower arrangements is fragrance. These aren’t plants that have been bred for scent to attract humans, just insects and birds. While I love a peony’s fragrance as much as anyone, I wouldn’t trade it for the sight of a butterfly covered flower.