College means different things to people. To some, it is an automatic expectation. To others, it is an unreachable attainment.

There may be young people today who are the first person in their families not to go to college. And that conversation may not be going so well.

When I was young, college was an automatic expectation. Tuition was built into the family plan. I didn’t appreciate at the time what a gift that was. But going to college was not my dream. It was the next step on the moving sidewalk.

My dream was to open a hair salon.

When I declared that dream out loud, as in “that adorable little house shack would be the perfect place for my hair salon,” the reaction was not what I expected.

Trigger warning: What you’re about to read is not intended to offend parents who have stated these exact words, nor is it intended to insult the profession.

The reaction from those who love me was: “We did not send you to private school to become a hair stylist.” That’s when I began to keep my dreams to myself.

I dreaded college visits. I’m from Ohio, and yearned to leave. But the college visits were scheduled for Denison, Ohio University, Miami University and other usual suspects — not that I had the grades to get into any of them.

Fortunately, on a family trip to South Carolina, I discovered Charleston. In a book, in a paragraph in the C section, I saw the name, College of Charleston. I fixated on it. I did everything I could to get in. And get in I did. And so began my dreaming out loud. The liberal arts college provided lots of opportunities to explore, for those of us who lacked direction or whose inner voices had not grown loud yet. 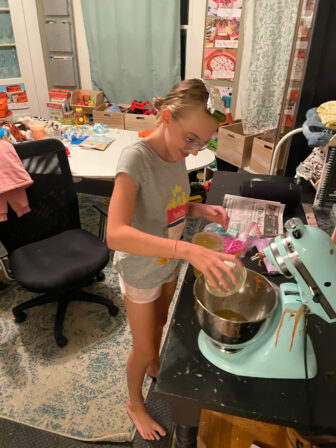 The 11-year-old, committed at the moment to going to cosmetology school, colors her hair using tin foil and Manic Panic. (Photo by K. Martin)

Fast forward to 2021. I have three children, the eldest being an 11-year-old girl. Through TikTok, she has discovered how to make and sell slime, and how to color hair, apply makeup, sketch on her iPad and lots of other creative things.

She wants to be a colorist — to color hair with chemicals and faces with makeup. (I did not influence the love of hair styling! I said nothing of my dream.) TikTok told her she needed to go to cosmetology school. One day, she vocalized this to someone who loves her. And the reaction was not as she expected: “You will not not go to college.”

I was not there for this conversation, but I was struck at history repeating itself under my roof. I immediately voiced my support, knowing that this entered me into the “new normal” realm of being OK with teenagers not going to college.

In defense of college, it was asked of me: “But didn’t you learn to write at college? Didn’t you learn everything at college?” No. I learned to write in language skills class in the sixth grade because my private school held me back from taking a second language and we were bored and had nothing else to do.

In college, I wrote a paper on Zelda Fitzgerald and received an F and was not nurtured as to why I failed. The teacher said: “What happened? I was so looking forward to that.” I don’t know, teacher, you tell me!

To redeem myself, I directed a play by Tennessee Williams in the black box theater because I knew all the theater people. I learned by redemption and pursuit. I became the editor of the literary magazine because the former editor was a colleague at the newspaper when I was a columnist and sold ads. She grew overwhelmed and almost published the book with loads of spelling errors and font misfires. I opted in to take over.

Experiences. That was what college represented for me. My parents invested in experiences, and for that, I am grateful.

After college, I still didn’t have a voice of my own guiding me. I moved back to Ohio. While conducting research in the library to find my passion, I was hired on a film set. There, I met people from New York City, and from there, was set to relocate. Moving day was scheduled for Sept. 11, 2001.

Stuck at the airport in Akron, I said out loud: “I want to be there so badly. I want to see this.” A person who loves me was horrified. They did not want me in danger. After more research in the library, I realized what I meant was: “I want to report on what is going on.”

Indecision is my worst enemy. Indecision tortures me. Once I know what I want, though, everything becomes clear and courage follows.

Days after 9/11, someone who loves me yet does not love New York City, and would not want me living there, brought home a New Yorker magazine he lifted from the dentist’s office and gave it to me in our kitchen. That small gesture meant a lot.

Tapping into ourselves is a gift that we can achieve, sometimes. Knowing yourself can be fleeting. Parents: If a vision is declared and is not the norm, allow exploration. See where it goes. Paths get created. Moving sidewalks break down.