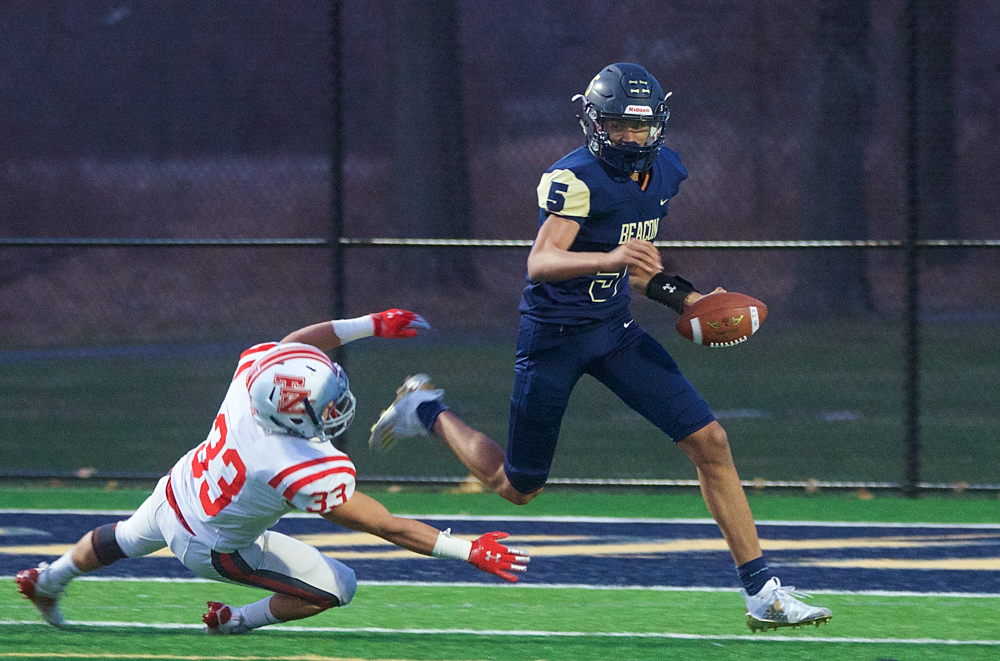 Quarterback Jason Komisar scrambles this past spring against Tappan Zee; after the game, both teams went into a 10-day quaratine because of COVID-19 protocols. (Photo by S. Pearlman)

The spring football season (moved from the fall because of the COVID-19 shutdown) didn’t go according to plans for the Bulldogs, who were unable to play two games due to quarantines and went 0-4 in the others.

But the Fall 2021 squad has 11 seniors and Coach Jim Phelan said he expects better things.

“The spring was a disappointment,” he said. “We were undisciplined and didn’t perform well. But we always go into a new season with high expectations. Some of the seniors are in their fourth year in our system. We’ll have more discipline, and we will be in better shape.”

“We have experience on both lines and good depth,” Phelan said. “That will allow our playmakers to make plays.” On defense, “we gave up a lot of points [in the spring], but there was some inexperience. This year they’re more savvy, which makes it easier to make calls.”

The team will face new opponents following a move by the school district to Section IX from Section I. “The goal is always to challenge for the league title and then the section title,” Phelan said. “Our new schedule [in Section IX] gives us the opportunity to be more competitive.”

The Bulldogs open their season today (Sept. 10) hosting Kingston at 7 p.m. and on Sept. 17 travel to Roosevelt High School in Hyde Park.

The Blue Devils are coming off a 2-4 season, falling in the spring to Tuckahoe for the Section I, Class D title. Haldane will miss quarterback Dan Santos and running back Darrin Santos, as well as lineman Christian Pezzullo and tight end and linebacker Doug Donaghy, who all graduated in June.

“We feel that this year’s group is a great combination of returning skill players on the outside, and tough physical linemen who will create a lot of points on offense,” he said. “We have an open competition at a lot of positions, and guys have stepped up to the plate to challenge and push one another.” 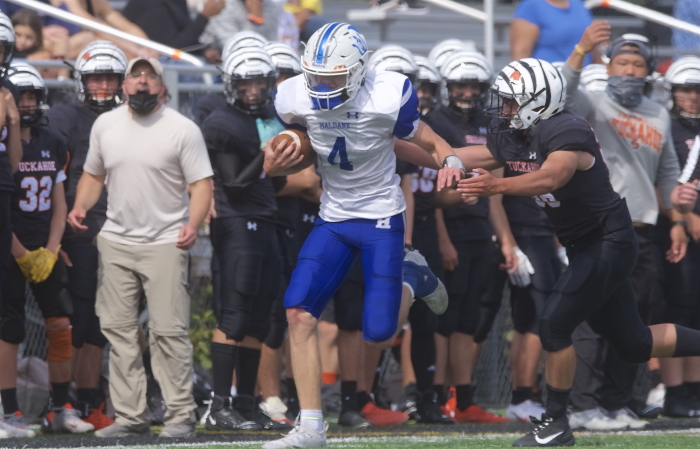 Receiver Soren Holmbo breaks down the sideline during an April game against Tuckahoe. (File photo by S. Pearlman)

Newcomers include sophomore quarterback Ryan Van Tassel. “He steps into an opportunity to win the starting job,” McConville said. He also noted Eric Stubblefield, a sophomore linebacker — “We’re excited to see him become a tackling machine” — and sophomore lineman Jack Hartman, “who has worked hard to add size and speed.”

On defense, “we want to put teams in situations where they’re forced to throw,” the coach said. “This year we have a great competitive schedule and look to improve each week to get ready for the end-of-year matchup against Tuckahoe.”