Two Beacon nonprofits recently received grants from the city, three from the county and one from the state Assembly.

The Beacon City Council on Monday (Sept. 20) approved a $50,000 contribution to the Howland Cultural Center and $15,000 for the Beacon Historical Society through the city’s newly established community facilities grant program.

The council created the program last month using $220,000 that had been repaid from a federal urban development grant that, from 1977 to 1988, allowed the city to make low-interest loans to businesses.

Funding requests for up to $50,000 were accepted for capital projects from Beacon nonprofits that serve a public purpose. Main Street buildings in Beacon’s historic district were also eligible.

The Howland Center applied to partially fund restoration of its 1872 building at 477 Main St. The center plans to launch a fundraising drive to rehabilitate the building in conjunction with its upcoming 150th anniversary.\

The Historical Society will use the funds to construct an ADA-compliant ramp at its new 61 Leonard St. location. 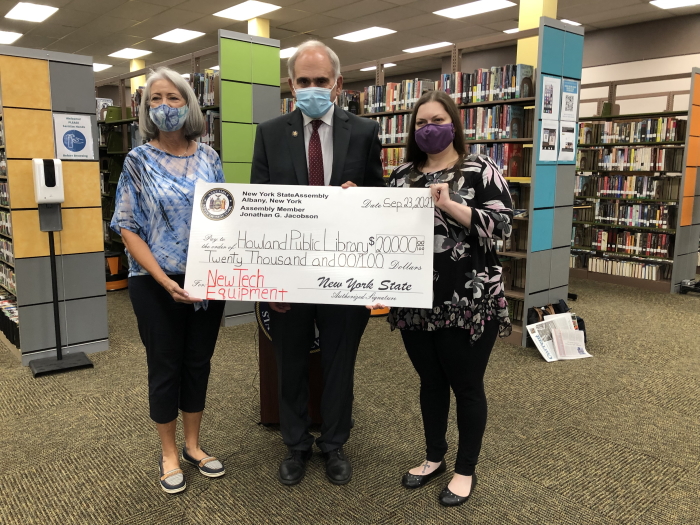 Dutchess County also awarded $15,000 this month to the Beacon Performing Arts Center for sets and props for its musical productions; $20,000 to the Beacon Soccer Club for uniforms and equipment and to upgrade and repair its concessions stand; and $50,000 to the Howland Public Library to buy furniture for the children’s and youth room and for science and tech materials.

The money was part of the latest rounds of the county’s ongoing Learn, Play, Create grant program that is funded with $3 million in federal pandemic relief funds. See bit.ly/learn-play-create.

In addition, on Wednesday (Sept. 22), Assembly Member Jonathan Jacobson, whose district includes Beacon, announced a $20,000 grant to the Howland library to expand its technology services and build out community spaces.