Chris Carnabuci, 57, who lives in Philipstown, is an architectural designer and sculptor. On Oct. 1, three of his pieces — busts of George Floyd and Breonna Taylor, who were each killed by police officers in 2020, and the late civil rights leader Rep. John Lewis — were installed in Union Square in New York City for an exhibit called SeeInjustice that continues through Oct. 30. 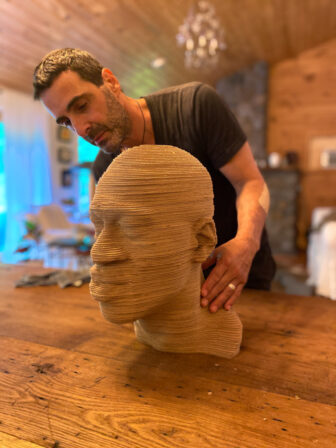 Carnabuci with the 20-inch-tall bust (Photo by Peter Freed)

This project grew out of a 20-inch-tall bust you did of Floyd. What motivated you to create it?

After he was killed and the world reacted the way it did, my wife, Paula, said: “You need to do a sculpture of George Floyd.” It made perfect sense; I would be capturing a moment that was significant, no matter how you feel about it.

How did it expand to include the others?

A friend, Andrew Cohen, showed it to Lindsay [Eshelman, the co-founder with Cohen of Confront Art, which organized the Union Square show], and she knew someone who knew someone who knew Terrence Floyd [George’s brother]. Terrence saw a photo of the piece and was moved by it. At that point I was working on a bust of Breonna and thought, “If this is ever going to be in the public eye, I might want another one,” and John Lewis came to mind. Then Terrence said, “You should make a bigger one,” and I said, “I can do that,” and scaled them all up to 66 inches. I had used Baltic birch for George but that was now hard to find because of the pandemic, so I used okoume mahogany for Breonna and John. The woods have different hues so I painted all three bronze.

The sculptures were made with a process called Computer Numerical Control. What is that?

I start with a 3D model that I feed into software that slices it into layers, down to 1,000th of an inch. I toggle the height because I don’t want so many slices that it would lose the “art” of it, or so few that it becomes abstract. Floyd has about 200 layers. Finally, I write the code so that the CNC machine at a shop in Suffern will know what bit to use, how fast the bit should spin and how far it should travel when it cuts each sheet. I number them all because otherwise it would be like assembling a jigsaw puzzle without a picture. Then I glue sections of sheets together to create pieces to assemble and disassemble. Otherwise it would weigh 1,000 pounds.

Two days after the installation, someone vandalized the Floyd statue. Were you surprised?

When we displayed the Floyd sculpture in Brooklyn over the summer, it had been vandalized, so it wasn’t unexpected. I saw photos someone posted on Instagram; at first I thought it was from a milkshake, but it was gray paint. What’s interesting is that bystanders — one guy was a painter, another guy had tools — had it fixed within a few hours. I don’t understand why people would be that pissed off. I don’t usually read comments online but a few I’ve seen said, “Why a statue of this guy? What did he ever do?” My response is: “Where have you been?” He’s a symbol. You can’t damage the symbol.

In 2019 you installed a 22-foot-tall CNC sculpture at the Burning Man festival of a woman inside an egg. I’ve heard it’s in your driveway?

It’s not in my driveway. It’s off my driveway. But it’s only her. The egg didn’t survive exhibits in Toronto and Mexico City. She’s right there at the edge of the forest. There were three goals with that piece: Finish her on time, have her look good and make sure she didn’t fall over and kill anyone.