While digging a grave for a child at the cemetery, the sexton discovered an adult skeleton dressed in woolen clothing at the depth of about 2 feet. The remains were exhumed, along with pieces of a coffin, a pair of boots and a hat. A passerby offered the opinion that the deceased had been buried in haste about 20 years earlier during a cholera outbreak; a county coroner’s jury concluded only that he had been killed or drowned, but that he had been “legitimately buried.”

Mr. Williams, of the firm Williams & Plumb in New York City, visited his Van Winkle relatives in Cold Spring to share a land deed dated 1728 that he said showed the family had once owned most of Newark, New Jersey. He said that by legal neglect they had lost the rights that would have made them all wealthy.

A bugler from the Cavalry Detachment at West Point who was in a rowboat with three other soldiers drowned in the Hudson after the vessel capsized as they tried to switch seats.

John Depew, of Garden Street, accidentally shot himself in the hand while examining a pistol.

A jury awarded Gilbert Austin $21.90 for the damage he said James Farley’s cattle had done to his cabbage crop.

In their annual report, the trustees of the Foundry District No. 13 reported that the school’s principal and two teachers had recorded the names of 225 children during the previous year but that the average attendance was 120.

A man who was walking along the ridge south of Main Street was knocked unconscious when he fell onto the railroad tracks. He said he had been walking toward the light from a house, but officials said it was more likely he saw the lantern at the switch. He was taken to the county poorhouse in an easy wagon.

Hugh Costello, described by The Cold Spring Recorder as “a gypsy who has been traveling through this section of the country for the past 20 years,” and who had arrived in the village two weeks earlier with his house-wagon and camped in the grove at the foot of Garden Street, died at age 65 of Bright’s disease. The undertaker suggested to Mrs. Costello that the body be removed but she said if she had a tent she would take care of it. The body was placed inside, and the widow kept a vigil until a funeral was held at Our Lady of Loretto.

H.F. Benjamin, the son of Mrs. S.N. Benjamin of Garrison, was a halfback on the Yale College football team.

A woman found intoxicated on the road to Poughkeepsie said she was on her honeymoon and that her husband had abandoned her in Cold Spring.

A village water line was installed at the Haldane school.

Martha Squire, known as “Aunt Patty,” died at her daughter’s home in Nelsonville two weeks after celebrating her 102nd birthday. She was survived by seven of her 10 children; the eldest was 84.

The Haldane Debating Club met at the school. The question was, “Resolved, that the European powers should interfere to prevent further massacres in Armenia.”

Robert Barrett of North Highlands completed a waterwheel that contained 200 pieces of wood and 600 bolts.

William and John Ward, who had been living at the Alexander Mead place in Garrison for two years, sold their household goods at auction before one departed for England and the other for Philadelphia.

According to The Recorder, “a mother in Cold Spring says she means to give her daughter, who has finished a college course, a course in bakeology, boilology, roastology, stitchology and mendology before she will consider her education finished.”

The Recorder noted that a new state law required that ballots be preserved for six months after Election Day in case the losing candidate asked for a recount.

Bridget McMahon, who was behind the bar at her family’s saloon on the road to Highland Station, fatally wounded Patrick O’Malley, a worker on the new state road near Anthony’s Nose. He was taken to the Philipstown Town Hall, where he died. After McMahon refused to serve O’Malley because he was so intoxicated, he demolished the bar with an ax. McMahon said that when she ran to alert her husband, O’Malley followed and threatened her. She shot him in the chin and, when he swung the ax, she shot him in the side. By O’Malley’s deathbed account, McMahon struck him inside the bar and then followed him outside, saying she would “fix him.” Three witnesses corroborated that account, and McMahon was indicted for murder.

A Tribute to the Buffalo Soldiers

Last month the U.S. Military Academy at West Point unveiled a statue on campus in tribute to the Army’s Buffalo Soldiers. It was created by sculptor Eddie Dixon based on a photo of Sgt. Sanders “Matty” Matthews, who served on base from 1939 to 1962 and in his retirement was a bus driver for the Haldane school district. He died in 2016 at age 95. 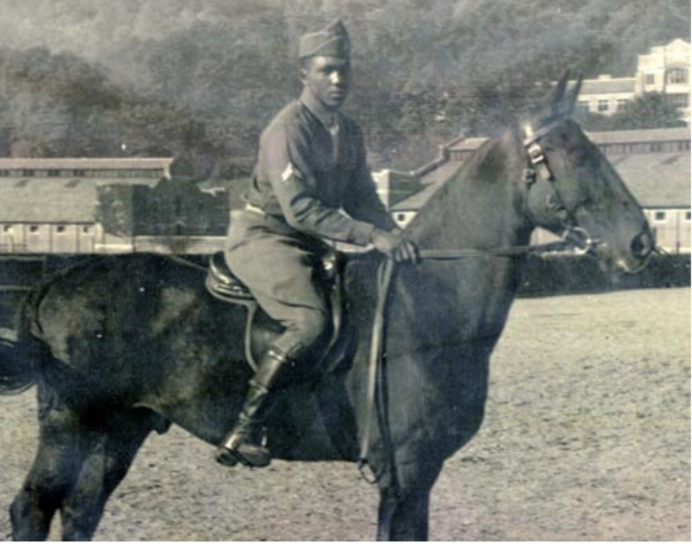 Sgt. Sanders “Matty” Matthews was a model for a statue to honor the Buffalo Soldiers erected at West Point last month.

The Buffalo soldiers supposedly received their nickname while fighting the Plains Indians in the 19th century; the Native Americans thought their dark, curly hair resembled a buffalo’s coat. In 1907 the remaining soldiers in the regiments were stationed at West Point to teach horsemanship to the cadets. The units were disbanded in 1948 when the Army was integrated. 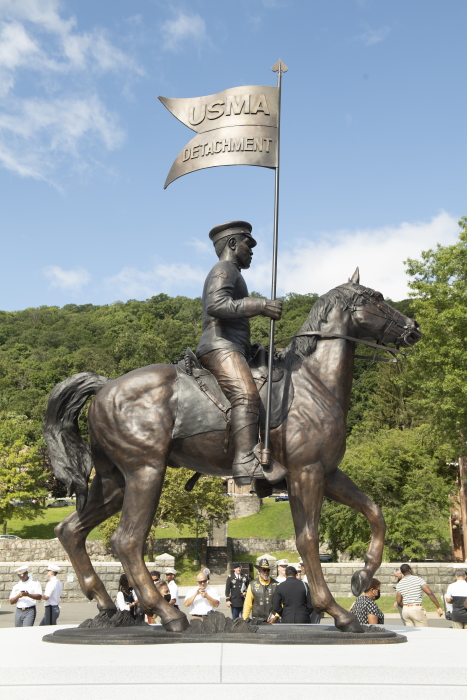 The statue was a gift from the Buffalo Soldiers Association of West Point, which Matthews founded in 2008.

Peattie Bros., of Fishkill Landing [Beacon], left a telephone message for Sheriff Bailey asking him to look out for a stolen horse.

Judge Nathaniel Parker of Kent sang his campaign songs at a meeting of the Republicans of Philipstown at the Town Hall.

Mary Proctor recounted her cruise to Norway and shared 60 lantern slides in a lecture at the Haldane school to benefit its library. 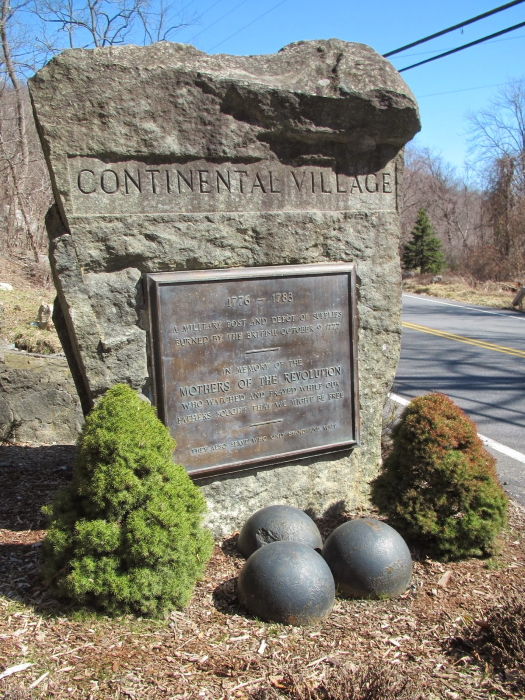 This memorial to the “mothers of the Revolution” was dedicated in Continental Village 100 years ago this month. (Photo by Jay Campbell)

A $1.67 million budget put forth by the Haldane school district was rejected by voters, 539-335, for the third time in a year. School officials noted that the budget was only $23,824 more than the austerity budget.

The Haldane school board hired Alfred Curven as a part-time public relations consultant. A week later he resigned, saying that PR for the district would be a full-time job.

The Putnam County Sheriff’s Department parked a new substation for the western side of the county — a converted office trailer that had been donated to the agency — on Route 9 near Lane Gate Road. Sheriff Ray Weizenecker also noted that the Cold Spring Police Department had agreed to use the same frequency in its patrol cars as the sheriff’s deputies.

The Haldane High School football team defeated Pawling, 2-0. The only scoring was a safety in the second quarter after Jim Budney blocked a punt.

An employee of the Putnam County Jail was arrested after she was caught sleeping while assigned to suicide watch over a troubled prisoner. The department said the guard falsified records to show that she had made her rounds.

The Cold Spring Fire Co. celebrated its 100th anniversary with a carnival at Mayor’s Park, with music by The Barking Spiders and a firematic parade with 29 companies that had been rescheduled from July 13 because of Hurricane Bertha.

The following weekend, the Village of Cold Spring celebrated its 150th anniversary with a Main Street parade and two Civil War reenactment camps at Mayor’s Park.

John Loase of Garrison, a math professor at Westchester Community College, published a book on sigfluence, a word he invented in 1984 that means a “significant, long-term, positive influence.”

The Philipstown Recreation Commission began the conversion of the Depot Theatre in Garrison into a community arts center. The Hand to Mouth Players, who had been leasing the building for its performances, left for a larger space on the grounds of the Veterans Affairs hospital in Montrose.

John Pierson discussed his newly released book, Spike, Mike, Slackers and Dykes: A Guided Tour Across a Decade of American Independent Film, at the Desmond-Fish Library in Garrison. He and his wife, who together ran Running Grainy Pictures in Cold Spring, sponsored a film series in 1991 and 1993 that showed movies on a barge in the Hudson River.

A former Putnam County Sheriff’s Department deputy sued the sheriff and his top aide in federal court, claiming they had forced him to falsify reports so they could discipline certain employees. As a result, he charged, a dispatcher had been suspended for 40 days without pay.

Metro-North hired the Allright Corp. to begin selling parking permits for 11 of its stations, including Cold Spring and Garrison. Allright agreed to pay the railroad $200,000 in annual rent and 50 percent of its gross over $600,000.

Cold Spring got its water from the Catskill Aqueduct for a week while the Highway Department installed pipes and valves to prepare for a hookup to a new water treatment plant under construction.

The state Supreme Court threw out a petition filed by the Philipstown Dirt Roads Association to prevent the widening and paving of Esselborne Road, East Mountain Road North and East Mountain Road South. The association had argued that the town failed to comply with state environmental regulations.

Joseph Klingelsmith, the innkeeper at the Hudson House, was seriously injured when he fell from a second-floor balcony. He was attempting to untangle a flag while leaning over a railing. It gave way and he fell about 15 feet to the sidewalk.