The heirs of the Churchill estate in Matteawan, which was valued at more than $200,000 [about $4.2 million today], announced plans to bring their claims to the land to court. The Poughkeepsie Eagle-News reported that the estate had “been cut up and sold to different parties who have built on and greatly improved the property. Parties who have deeds for sections of the same are in a very troubled state of mind concerning the issue of this suit,” including St. Luke’s Episcopal Church.

Charles Smith won a 2-mile boat race at Fishkill Landing in 16 minutes over Augustus Mosher, who finished in 17 minutes and 7 seconds.

Joseph Conklin Jr. of Matteawan was shot in the chest and seriously wounded by a gang of chicken thieves. Conklin, who lived at the foot of Mount Beacon, had gone to investigate a commotion in his hennery and found three men inside the coop. The doctors at Highland Hospital requested an X-ray machine from New York City to locate the bullet.

Orville Conklin of Matteawan, with a handicap of 100 yards, won the 2-mile bicycle race at the Orange County Association’s Animal Show.

A 17-member company performing In Old Maine ran out of money in Matteawan. They also had run out of money a few days earlier in Hawley but received a $10.88 advance from a boarding house manager to get to Newburgh. As collateral he kept a bass drum, cymbals, a property trunk and scenery. At Fishkill Landing, the company had to borrow more money to buy tickets for the trolley to Matteawan, where the manager of the opera house, fearing the company would not be able to perform, paid for supper. Unfortunately, the show only netted $10, and the company had to sleep at the venue.

An Italian laborer from Matteawan who showed up at Highland Hospital with an injury to his tongue that required 16 stitches refused to explain what had happened.

A well-dressed man inquired at Peattie Brothers stables at Fishkill Landing about renting a bicycle. George Peattie, suspicious, said that none was available. But when George left for another part of the building, the stranger approached Peattie’s son, Charles, saying George had rented him a bike for two hours. The boy provided the wheels, and the man has not been seen since.

Under advice of counsel, the City Council set aside a newly enacted ordinance that required beverage dealers to have licenses and banned them from putting shades or other obstructions in their windows. A similar law had been challenged in court in Buffalo, and council members wanted to see how it played out. According to the Poughkeepsie Eagle-News, one unforeseen effect of the ordinance in Beacon was groups of children staring into tavern windows “like the audience at a sideshow.”

A judge granted a divorce to Ethel Carey after her husband, Amos, admitted he had registered at a Newburgh hotel in September 1920 as “Mr. and Mrs. A. Conroy, Stamford, Conn.” with a woman who was not Ethel. He ordered Amos to pay alimony of $15 per week. The couple had been married in Beacon in 1916.

The Beacon High School basketball team prepared to open the 1921-22 season against Philmont, which it had defeated the previous year, 103-0.

Federal health authorities declared Beacon’s water unfit for drinking, and state authorities said the city had not done enough to protect its watersheds from pollution. It ordered local officials to begin rigorous inspections of outhouses, summer camps, pig pens and chicken coops, and recommended that the reservoir be treated with chlorine gas.

A Poughkeepsie woman who had been detained for public intoxication by a Beacon motorcycle officer bit him on the arm, drawing blood.

James Nocerino, of the Hallock farm on Green Fly Road near Beacon, was killed by a bull when he went to the barn to milk the cows. It was not clear whether the bull escaped from its pen or if Nocerino opened the gate to feed it, but the victim was found crushed against a wall. He had moved to the area six weeks earlier from Brooklyn.

To reduce the budget, the City Council called for the dismissal of three of Beacon’s nine police officers and for the chief to assist with patrols. 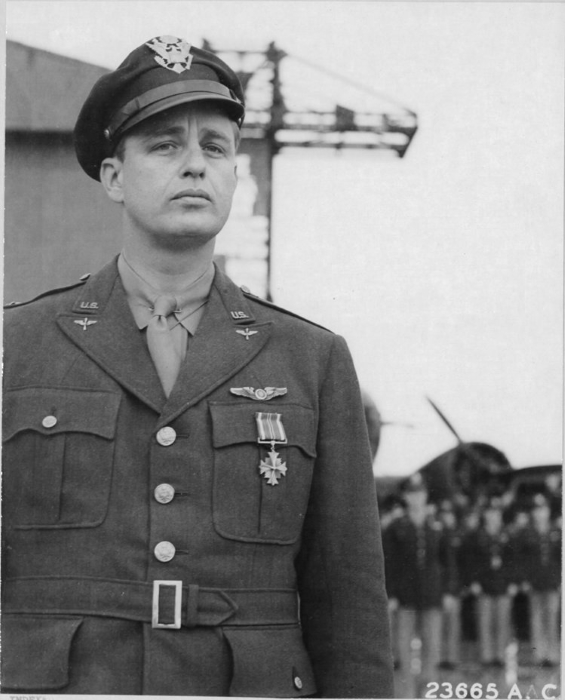 Elliott Roosevelt, son of a president, in 1946 declined to endorse a fellow Democrat for a state Senate seat. (U.S. Army)

Gen. Elliott Roosevelt, the son of the late president, said he could not endorse Robert Pendell, a Democrat from Beacon who was running for a state Senate seat, because of Pendell’s opposition to the Ives-Quinn anti-discrimination law. [Gov. Thomas Dewey had enacted the statute in March 1945, making New York the first state to prohibit employment discrimination based on race, creed, color or national origin.] Pendell dismissed Roosevelt as an “extreme reactionary,” saying he opposed Ives-Quinn because efforts to “regulate the attitude of the mind and heart of one segment of the population against another is beyond the capacity of man. Tolerance and lack of discrimination can be achieved only as we improve civilization.”

A week later, when Roosevelt demanded that Pendell drop out of the race, the candidate responded by accusing Roosevelt, Dewey and other “little men” of turning the laudable principle of equal rights into “petty politics to cater to minorities who feel they have been discriminated against.”

Speaking before the Beacon Democratic women’s club, the party’s candidate for the Assembly, W. Victor Ogley, said he supported Ives-Quinn. Relying “on a gradual program of education is insufficient,” he said. Like theft, fraud and murder, he said, “racial discrimination is a crime against society and we should have laws against it.”

A boxing match at Poughkeepsie between Paulie “Kid” Hawks of Beacon and Johnny Davis of Albany was stopped in the third round when Davis opened a cut above Hawks’ eye. The Kid protested but the ring physician sided with the referee.

The Trinity council of the Knights of Columbus “burned its mortgage” during a celebratory dinner at the Elks Lodge.

The late Paul Gordon, an archer who made bows and arrows at his Tioronda Avenue shop, willed 70 books on the sport to the New York Public Library, including one published in 1675.

A vandal who broke into the Lewitties and Sons furniture company on Fishkill Avenue overnight slashed 14 sofas and 17 upholstered chairs that were waiting to be loaded for delivery. Workers at the plant were on strike.

A delegation from the Georgia Historical Commission said it planned to fly into Stewart Field in Newburgh to obtain a court order to retrieve the remains of Col. William Few from the cemetery behind the Reformed Church. Few, who was among the signers of the Constitution in 1787 while serving as a senator from Georgia, had died in 1828 at his daughter’s home in Fishkill Landing and was interred in the family vault of his son-in-law. 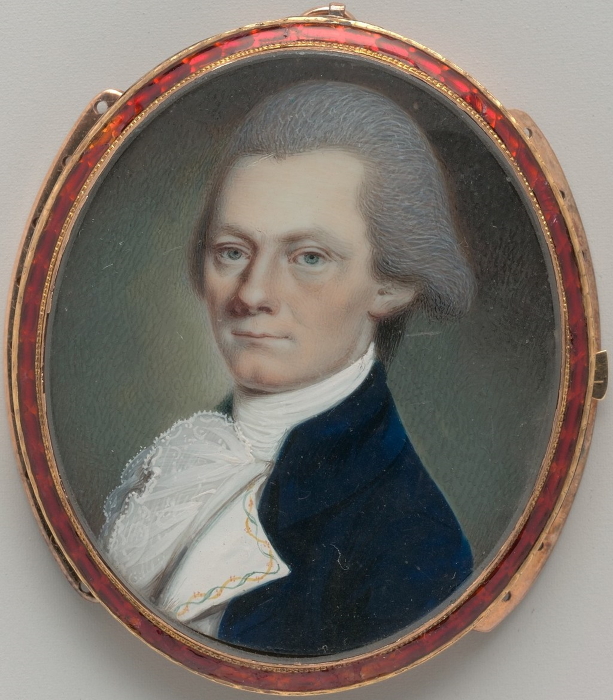 A portrait of William Few by John Ramage

The City Council proposed a $2.03 million budget [about $13.7 million today] that included a 41 percent increase in property taxes. Mayor Robert Cahill noted that the city had lost $105,000 in state aid and seen an increase of $305,000 in the costs of constructing a state-mandated sewage treatment plant.

The Rev. Donald Poulin, who had been pastor at St. Joachim’s Church since 1985, died at age 68. He was survived by three brothers (two of whom were also priests, in Kenya and Micronesia) and a sister who was a nun.

The City Council passed a proposed budget of $8.76 million [about $15.2 million today] that included a 2.85 percent increase in property taxes. City Administrator Joseph Braun said unionized city employees and firefighters were due a 3 percent raise and the city lost revenue when a private firm sold a rail line to tax-exempt Metro-North.

The Beacon High School boys’ cross-country team began the season 8-0 behind Chris Eve, who won four of the meets, most recently in 16:35.

The 61-bed Craig House psychiatric hospital laid off 25 workers because of what it said was lower patient demand and falling reimbursements.

A new state law required teachers to teach the Great Irish Hunger of the 1840s as a human rights violation akin to slavery and the Holocaust. John Gauquie, who taught history at Beacon High School for 33 years, said he always covered the potato famine but that teachers “tended to get an English point of view of history.”

A Beacon man pleaded guilty to attempted murder in exchange for a 15-year prison sentence. He admitted to choking a clerk at Rite-Aid with a telephone cord after taking $4,227 from the safe.

Beacon sold its former City Hall at auction for $200,000. The buyer was David Schwartz, a resident of Miami with ties to the Hudson Valley, who said he had no immediate plans for the two-story, 6,000-square-foot structure. Pauline Damia of Croton bought the former police station for $70,000. A new municipal building was nearly complete at the foot of Main Street.