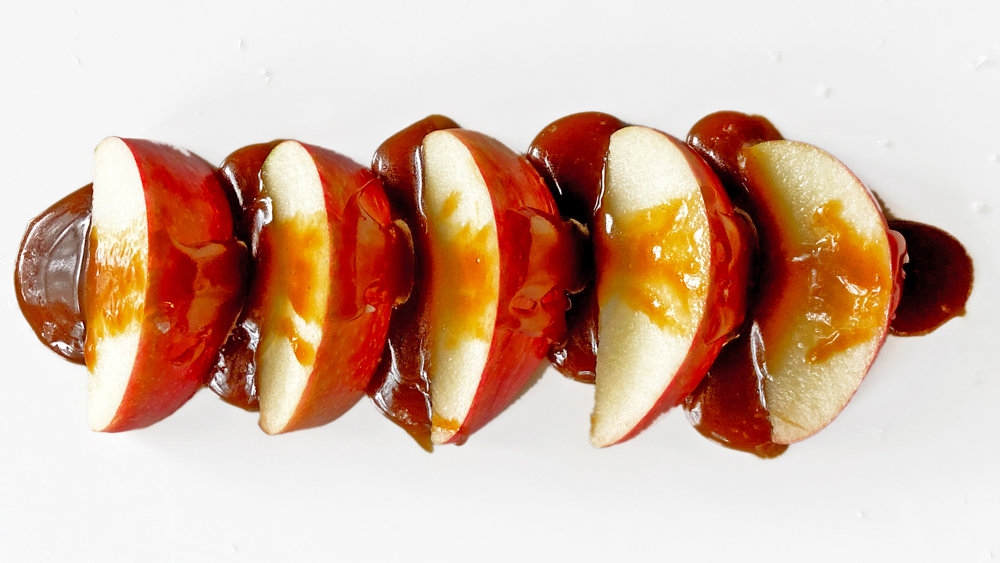 Despite the fact that, by all reports, apple crops are off this year, locally you wouldn’t know it. Last weekend was an almost desperate frenzy of activity and a flurry of offers and entreaties to “Please! Take some!”

Just-picked apples and countless downstream concoctions — applesauce, apple butter, chutney, crisps and cobblers — are hard to turn down, but, jeez, when it rains, it pours! And speaking of pouring, fresh-pressed cider was the final frontier.

But regardless of how good it is, how much can one household stand? Then I remembered boiled cider.

No, it’s not a hot spiced drink. It’s an actual thing, a traditional and all-but-forgotten New England homesteaders’ staple, a shelf-stable sweetener, produced by simply boiling down fresh-pressed and otherwise unprocessed apple juice (reducing it to about an eighth of its original volume) to a concentration the color of molasses and consistency of maple syrup.

Boiled cider (or apple molasses as it was also known) is also a useful substitute for sugar, or honey or maple syrup in baking — cider doughnuts, anyone? And culinary recipes could benefit from the complex sweet-tart flavor of New York’s official state fruit. (For instance: as a glaze for ham or pork, or even roasted squash or Brussels sprouts, or simply to sweeten baked beans.)

Boiled cider (along with cider jelly) was one of the first distinctive and disappearing American foods to be included in the Slow Foods movement’s “ark of taste,” an international catalog of “endangered” foodstuffs. Vermont-based Wood’s Cider Mill was cited as one of the last — if not only — commercial purveyors of the product. (But to be fair, I found that Hollenbeck’s Cider Mill in Virgil, New York, does produce boiled cider for sale in their farmstand store but doesn’t ship. I’m sure there are others but it’s an under-the-radar industry-in-the-making.)

Then again, if colonial homesteaders could do it, it’s easy enough to muster some up in any modern kitchen. As mentioned, it’s wildly useful and a great addition to the pantry.

Hence this attempted deconstruction, a caramel apple turned in on itself — a caramel dessert sauce made from boiled cider, just in time for the holidays.

Use it as a final touch drizzled over holiday festive cakes and pies or just plain ice cream. (It’s good on yogurt, too.) Use it in pies, strudels or bread puddings or in breakfast cinnamon rolls or to coat candied nuts — anywhere you might use a “straight” caramel sauce. A light sprinkle of flaky sea salt wouldn’t be out of place.

Or just keep it simple: As a “dip” for slices of fresh apples (as shown here), it’s proof positive that less is indeed more.

1. Bring fresh cider to a boil in a large (at least 4 quarts; larger, if available) saucepan. Keep an eye on it and reduce it to ⅛ of its volume, or ½ cup of reduced, boiled cider.

2. Over medium to medium-low heat, to the saucepan containing the ½ cup boiled cider, add sugar, cinnamon, nutmeg, butter and ¾ cup of the cream. Swirl the pan to incorporate the ingredients and adjust heat for a low-foaming bubble. Cook for about 10 to 12 minutes. (If you have a candy thermometer, you’re looking for a final temperature of 230 to 235 degrees.) The sauce will thicken and darken to a caramel consistency as it cooks, but keep in mind it will thicken more as it cools.

3. Remove from heat and add the vanilla, remaining cream and salt. Stir to combine and set aside to cool. Transfer sauce to a heat-safe container. Serve warm. (Sauce will keep stored covered in the refrigerator for up to a month. Re-warm uncovered container in a water bath. If you need to thin it out a bit, while warming add 1 tablespoon of cream at a time and incorporate to desired consistency.)