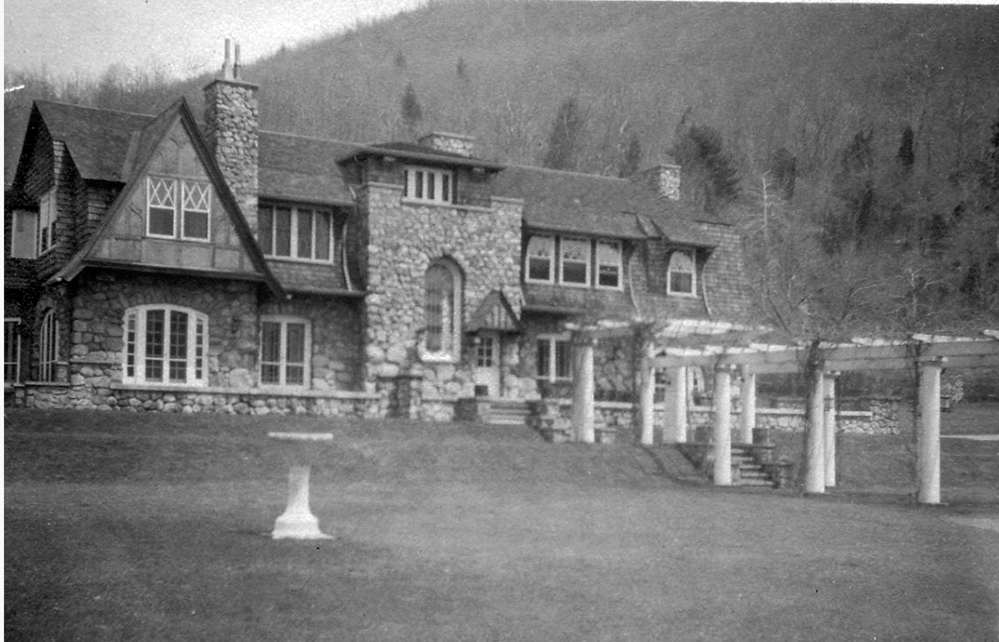 The Cornish Estate circa 1918 (Photo provided)

Fifty years ago, Thom Johnson took a trip to the Hudson Highlands that changed his life.

He was a high school student in Dobbs Ferry when a friend showed him a photo of Bannerman Castle. Intrigued, they drove north, stared at the ruins and wondered what the story behind them was. After returning to the car, they noticed an ungated road. Curious, they made the turn and found a clump of ruined stone buildings.

“It was a similar experience as what we had just had at Bannerman,” he recalled. “We stood there and said ‘What the…?’ ”

The friends drove into Cold Spring. “People said, ‘Oh that’s the old Cornish Estate.’ I said, ‘What can you tell me about them?’ And they said, ‘We just told you everything we know.’ ” 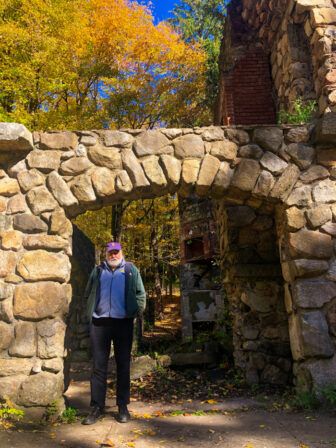 Thom Johnson at the site (Photo by B. Cronin)

Johnson became a high school art teacher and musician but maintained his interest in the Highlands. He would co-write a book about Bannerman Island but information about the Cornish Estate was harder to find. He ended up kindling an interest in the estate in one of his students, Rob Yasinsac, who went on to co-author Hudson Valley Ruins. Neither man, however, could find a photo of the estate from before it fell into disrepair.

Yasinsac’s book caught the attention of the descendants of the two families who had lived at the site: The Sterns, who bought the property and built a farm around 1904, and the Cornishes, who took over in 1916. The families were able to supply photos and more information.

Johnson, now retired, spoke to the New York State parks department, which owns the land, about organizing volunteers to clear the brush that had consumed the ruins and put up informational kiosks showing what the buildings looked like before a 1958 fire destroyed most of the woodwork.

New York State had been offered the site in 1938 as parkland but declined because it said the property was too rocky. Instead, it was sold to Central Hudson, which contemplated a power plant between Breakneck Ridge and Mount Taurus; the utility abandoned the plan after seeing the fierce resistance that Con Edison faced when it proposed a plant on the river at Storm King. The state eventually took the property and in the late 1960s folded it into the Hudson Highlands State Park.

The site is rocky, which makes it difficult to imagine that many small farms once flourished in what has been called “Breakneck Valley.” But Johnson points out that the ample water flowing from springs, brooks and cascades was a big draw. Goats were enlisted to keep the grass in check. Many of the towering trees weren’t there; Thomas Cole’s 1826 painting Storm King on Hudson, painted from the site, shows a clear view across the river.

Ten years ago, Johnson and a band of volunteers began clearing away the vines and poison ivy that nearly hid the ruins. Then they cleared the grounds. A grant from the nonprofit Parks & Trails New York paid for 16 kiosks that have been installed over the past few months, with more on the way. They are placed on spots where historic photos supplied by the families were taken.

Those photos show what once was: A beguiling mixture of rustic stonework that resembled a French chateau, topped off with English Tudor sections, nods to the prairie architecture of Frank Lloyd Wright, and a roof that was contoured to mimic the ridge line at Breakneck. “It’s almost too weird for words, but that’s what makes it interesting,” Johnson said.

He adds: “This is a work of art. I consider this sculpture.”

A ribbon-cutting is planned for the spring when a second batch of kiosks is installed, but in the meantime, there’s still more work to be done, and Johnson is always looking for volunteers and new photos or information. (The next cleanup of the site is Nov. 13; email Johnson at [email protected])

Johnson said he would like visitors to take away from the site not only a sense of what the estate once was, but what the site could be. On a more mundane level, if they could take away some of the garbage that has accumulated as more hikers have discovered the site, that would be great.

“It’s strange to think about this,” he said as we watched group after group of hikers amble by, “but I used to come up here to get away from people.”